Brazil in political crisis: what’s going on and what might it mean for development?

Chris Lyon is a PhD candidate at GDI. The working title of his thesis is Exploring a relational conception of social justice: liberals, radicals, and Brazil’s ‘new social contract’

With the world’s attention trained on Brazil ahead of the Rio 2016 Olympics, its political leaders have made a splash with the impeccable timing of a synchronized swimming team, but unfortunately one whose members proceed to fall out, try to drown each other, and then all fail their drugs tests anyway.

Firstly, what just happened? Here is a not-entirely-impartial synopsis. 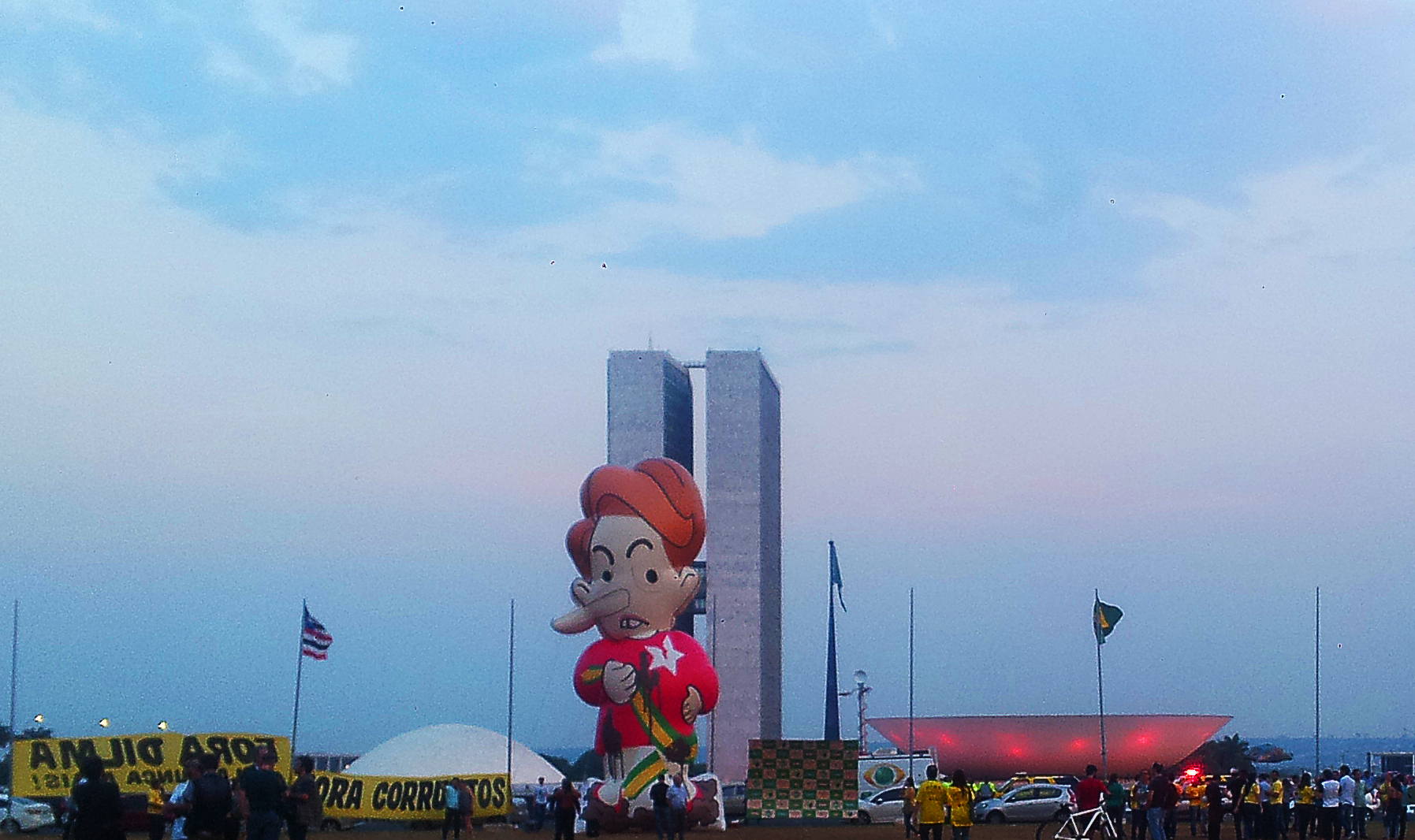 Protest outside Congress in Brasilia, October 2015 -photo by author

On Thursday Brazil’s Congress voted to begin impeachment proceedings against President Dilma Rousseff, meaning she is suspended from office and unlikely to return, and the coalition led by her centre-left Workers’ Party (PT) has been supplanted by a new administration led by the ‘big tent’ party PMDB. Dilma is culpable for window-dressing government accounts to make public spending appear lower. Her suspension follows huge demonstrations mobilised under an ‘anti-corruption’ motif. So, a victory for people-power holding corrupt politicians to account, right?

Well, it’s not quite so simple. In the Brazilian context Dilma’s infraction was comparatively minor, and the grounds for impeachment are debatable. Moreover, there was no personal gain involved, the aim being to justify continued spending on social programmes (arguably somewhat electorally-motivated), and Dilma refused to strong-arm any corruption investigations, even given clear opportunities and the increasingly apparent fact that her adversaries would use the investigations to catalyse her downfall. Meanwhile, the politicians leading the ‘anti-corruption’ campaign themselves face considerably more serious and more personal corruption allegations.

Nevertheless, it seems feasible that for Temer, Cunha, et al the process will now, as Brazilians say, ‘end in pizza’, i.e. with no real consequences. The pro-impeachment movement was inflamed and orchestrated by Brazil’s right-leaning and famously wilful media, and the predominantly white, middle class protests focussed almost entirely on Dilma and the PT, typically voicing dissatisfaction with the struggling economy and the redistributive and state-focussed trajectories of 2003-onwards PT government. Arguably the principle raison d’être of the movement has now been fulfilled.

To be clear, almost nobody in this scenario is Snow White. The PT’s reputation as a principled ideological party has been tainted by several corruption scandals. Equally, though, few are seriously pretending that righteous outrage at Dilma’s inventive accounting is really much more than a pretext for cutting short her administration for other reasons, such as policy disagreement and the spluttering economy. Whatever the shortcomings of the Rousseff government – and there were plenty – this looks rather like a soft coup mounted by a plutocratic media and political class that has decided it no longer has to accept the outcome of the 2014 election.

Secondly, then, what implications might this have for development processes?

On the face of it, anybody who likes their development in an egalitarian and pro-poor flavour should be deeply concerned. The rise of the PT as a party of government, first at local and then, in 2003, federal levels, has been associated with a huge expansion in social policy and anti-poverty programmes, significant reductions in poverty and inequality, and a wide-ranging experiment in more deeply and diversely participatory democracy. Early 2000s Brazil quickly ascended to inclusive development ‘success story’ status. (Although the PT can’t take sole political credit for this, and also was initially helped considerably by a commodities boom.)

Meanwhile, the impeachment protests have consistently voiced grievances over the PT’s penchant for redistribution and state action, and, inside government, impeachment has been driven by a coalition of power-brokers, rightist evangelical Christians, powerful agricultural interests, and even apologists for the military dictatorship of 1964-85. (During the surreal televised spectacle of hundreds of corruption-accused politicians voting for Dilma’s impeachment ‘in the name of truth’, ‘in God’s name’, etc., Jair Bolsonaro’s statement particularly stood out. The ultra-right Rio congressman dedicated his vote to Carlos Brilhante Ustra, the head of the unit that tortured Dilma Rousseff as an anti-dictatorship guerrilla; his son Eduardo dedicated his vote to “the military men of ’64”.)

This must be seen within the longer historical context of deep-seated inequalities stemming from the nature of the Portuguese colonial project, with its small class of exceptionally wealthy and powerful landowners (latifundistas) and the largest slave population in history. The resulting post-colonial society was deeply stratified along lines of race and class, with world-leading levels of inequality, a large and impoverished underclass, and wealth, land and power concentrated in a small elite.

Painstaking erosion of these structural dynamics began with the late 1980s redemocratisation process and the new constitution that emerged. The social rights enshrined there, and their practically effective institutionalisation post-‘88, were hard-won results of intrepid social movement activism and canny political deal-making. The period of increased progressive state action from 2003 consolidated these gains. Now there are genuine fears that, as per a Rio favelado, “they’re stealing the little we’ve achieved”. As if symbolically confirming the worst, within hours of the impeachment vote against Brazil’s first female president, Temer unveiled his new cabinet, containing a significant contingent from the influential rural landowner bloc, and comprising 100% white men, in a country where 51% are women and 53% black or mixed race.

As such, to the question ‘what will this mean for inclusive development in Brazil?’ the instinctive answer is: who knows, but it’s probably not good. However, it’s not necessarily so simple. The coming period of more conservative and economically neoliberal government will amount to a test of the strength of the institutionalisation of the progressive aspects of the constitution of ‘88, but probably, more fundamentally, of how structurally profound the changes of the past three decades have been.

Politically, an important innovation of redemocratised Brazil has been not just the substance of policy decisions, but the underlying redefinition of political space; how things are decided and who decides. Economically, a new working/lower middle class of previously impoverished Brazilians, revitalised labour unions, and a more progressive tax structure brings new dynamics. Socio-culturally, there is increased attention on dynamics of gender and race inequality. Policies such as the world-famous Bolsa Família conditional cash transfer programme continue to enjoy relatively broad support, and rolling back such initiatives could be prohibitively politically costly. Acting president Temer has already suggested as much. While the new finance minister is  speaking a recognisably austerian language given the flatlining economy, it’s also possible that short-term pressure may be eased by a degree of recovering growth as investors react favourably to a more advertently pro-business administration. It is also unclear what will happen politically; the 2018 elections could, under exceptional circumstances, be brought forward, and it’s probably too early to say what the outcome might be. Longer term, though, the underlying tectonics of the process that installed the new interim regime suggests that Brazil’s progressive political forces have a fight on their hands, again.