Chronic poverty and inequality in Uganda. The last mile? 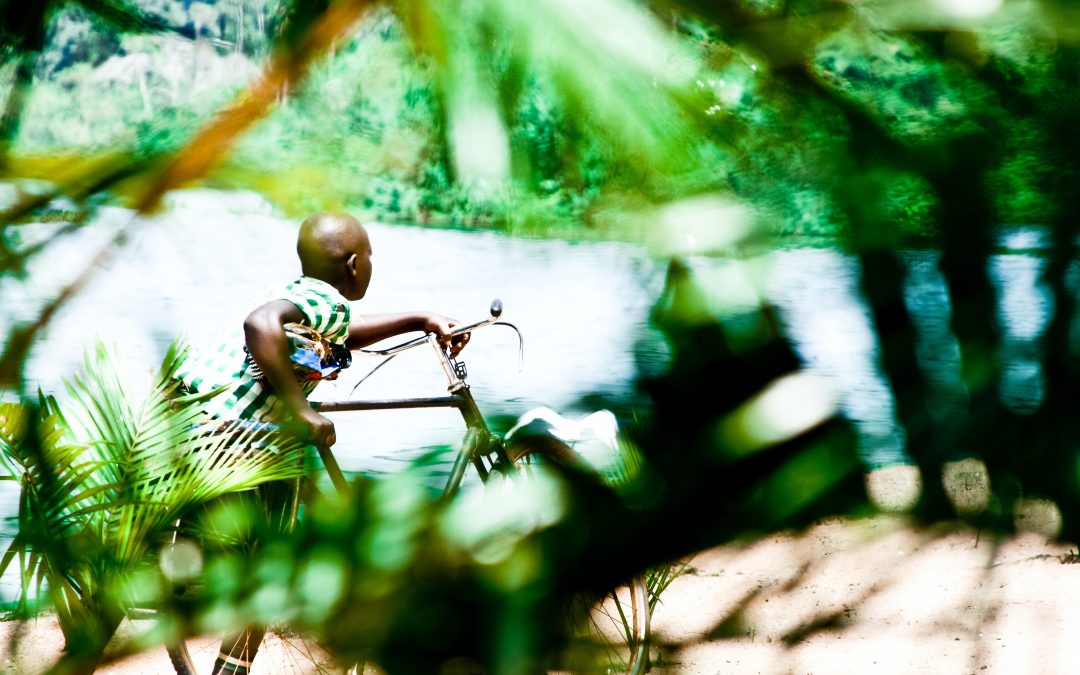 Global development aims to eradicate poverty in this decade. The task, according to the latest figure from the Uganda Bureau of Statistics, involves 21.4 per cent of Ugandans living in poverty. And according to the World Bank (Poverty Assessment Report 2016), nine out of ten poor people live in rural places and two-thirds in the North and Eastern regions. But success in this task is hindered by a lack of knowledge on why families stay poor or what predicts chronic poverty. Since the turn of the century, few studies have modelled chronic poverty and its key predictors, those focusing on the same families that are extremely poor in consecutive times of observations. Without such knowledge, a world without poverty will remain elusive.

To gain such understanding we can use panel or repeated observations of families to sift various dynamics of poverty over a long period. I draw from Uganda National Panel Surveys 2013/2014, 2015/2016 and 2018/2019. Previous attempts at understanding chronic poverty in Uganda used not only outdated data but also limited methods, relying on a series of trivariate tables ie, a cross-tabulation of poverty for consecutive times for certain value of a key predictor such as urban places and yet another for rural places. This has some uses, giving snapshots of chronic poverty. But such a method quickly hits a limit. It cannot provide a nuanced picture of chronic poverty because other key predictors are set aside by necessity. Because if multiple predictors were to be simultaneously entered, the method quickly produces unwieldy tables; hence, attempts are rare. Plus, there is no possibility to weigh one key predictor against another eg, against place, gender of family heads, their education, their age and region (Northern Uganda versus the rest is typical), ultimately denying policymakers informed targeting.

This new exercise based on the most recent panel surveys has two aims:

The aims can be achieved using a dynamic model of extreme poverty applied to household panel surveys in Uganda, up to 2019. Extreme poverty is conventionally measured at the international poverty line of $1.90 a day. Beyond the common trivariate tables (shown below), a dynamic probit model was applied, entering all key predictors and past poverty status. Such a dynamic model offers new insights into the persistence of poverty and the likelihood of achieving the global development goal of eradicating extreme poverty. If the persistence is found to be strong, this does not bode well for achieving the global goal.

The exercise shows new and important results on chronic poverty as well as social and spatial inequalities. The same 3546 families followed over three repeated visits give the first set of results summarised in trivariate tables. Table 1 shows the persistence of poverty over consecutive times (T and T+1) experienced by the families. Read row-wise, the last row shows that of the poor families today 71.2 per cent remain poor tomorrow. More than two-thirds of families experienced chronic poverty in Uganda.

Inequality has well known spatial character in Uganda. The North is home to more families in poverty, but do more of them experience persistent poverty? Table 2 shows chronic poverty transitions in the North (left pane) compared to the rest of the country (right pane). The panel surveys evinced a marked spatial inequality in chronic poverty (last row): more than eight in ten families in the North, while fewer than seven in ten families in the rest. A difference of more than ten per cent in chronic poverty. The literature does expect that extreme poverty is more prevalent in the North but few suggest that it is also more persistent. The analysis showed that extreme poverty is indeed more prevalent and more persistent in the North than in the rest of the country.

These tables warrant the term chronic poverty. And it will not be misplaced to consider its predictors other than spatial ones. We will see how key predictors of poverty contributes to the chronic poverty in a dynamic probit model which includes family size, family head characteristics (age, gender, education ie, secondary school versus lower levels), place (urban versus rural) and past poverty. The marginal probabilities are collected in table 3, of which the last four rows are drawn into plots of marginal probabilities (figure 1).

Shown in table 3, families headed by women compared to those headed by men have higher probabilities for being in poverty but this difference is not significant. Education has a strong and significant bearing on being in extreme poverty. If the head has a secondary education or more, the family has 13 per cent lower marginal probabilities of being poor.

Families in rural places are at higher risk of poverty by 14 per cent. The rural-urban difference can arise from many factors. Lack of physical infrastructure and public services is one. Another is social norms that can act as a binding constraint in one place but not in another. In South Asia, for instance, research suggests that in rural places social norms about women’s role led adult women to experience distress when exercising their agency. On the other hand, their sisters in urban Dhaka experience no such distress when exercising their agency, in fact, their mental health is higher. Together this suggests that similar social norms about the same group of people (adult women) bind stronger in rural places than in urban ones. This social norm effect can give rise to development differences in health, livelihoods or incomes between urban and rural places, beyond the difference in physical infrastructure or public services.

Insights from the result of a dynamic model of chronic poverty are readily grasped in plots of marginal probabilities of statistically significant spatial and social inequalities (figure 1 from left to right pane: North versus rest of the country, education of family head and urban versus rural places). The plots uniformly show that young families are at higher risk of poverty though not significantly so. In accord with the trivariate tables above the North is home to significantly more families with chronic poverty throughout a wide range of ages of the family head (left pane); the difference in probabilities is 11 per cent. But compared to trivariate tables the dynamic model yields much more results that can be weighed against this North effect.

Family heads with only up to primary school education lead more families in poverty (middle pane); the difference in probabilities is 13 per cent. This social inequality in chronic poverty contrasts with the existing drive to deliver universal education up to secondary levels. But the largest difference is yet spatial: urban versus rural at 14 per cent (right pane), hinting at more than just infrastructure difference between these places. 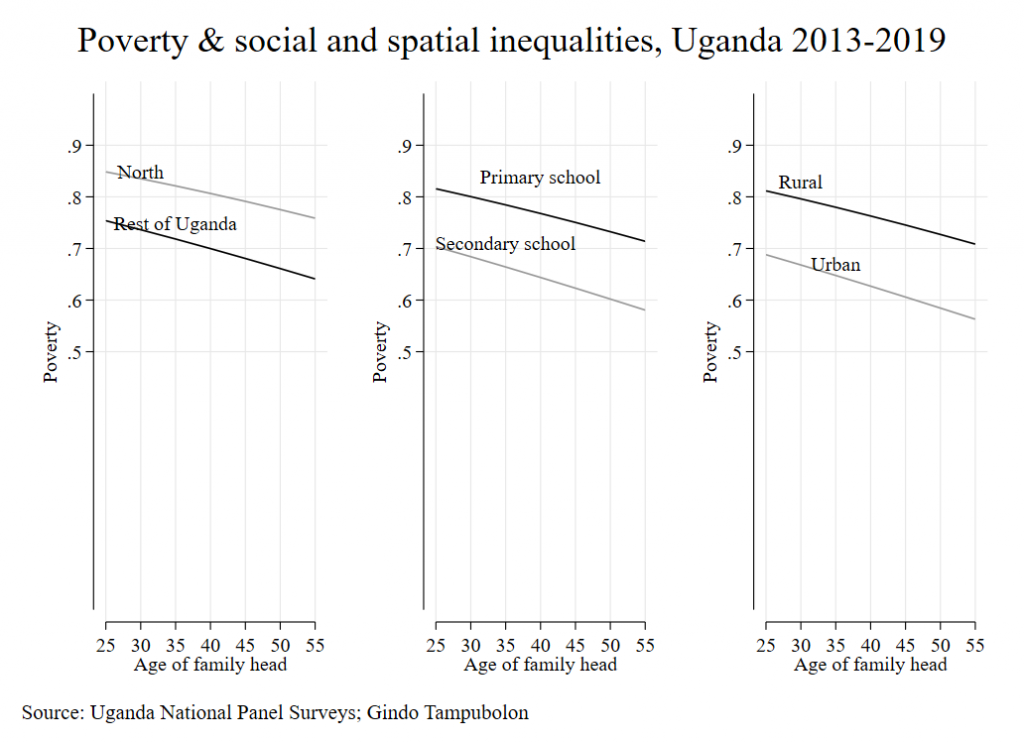 To recap, recent evidence on chronic poverty and the grip of inequalities is lacking in Uganda. But the newly released Uganda National Panel Surveys 2013-2019 helped to show for the first time the extent of chronic poverty in the country today. Chronic poverty, when people living under $1.90 a day today remain so tomorrow, is considerable. There is more than an even chance that poor families today will remain poor tomorrow. Poor families at the beginning of the surveys are significantly more likely at 26 per cent to remain poor six years on. This is the largest marginal probabilities uncovered. Thus any poor family today has more than 6 per cent (26 per cent squared) probability of being in poverty at the end of the decade, not what the world promised the poor. Incidentally, this likelihood has not considered an unprecedented shock of a pandemic, as nothing comparable to this shock has happened in Uganda from 2013 to 2019.

Added to this persistence is a strong grip of spatial and social inequalities. Families in the North and in rural places are more likely to experience poverty compared to Ugandans elsewhere. But education is a marker of social inequality that offers hope if delivered equitably. Better educated persons (completing secondary school or higher) evidently hold families with lower probabilities of being in extreme poverty. The policy of universal secondary education is apt in this regard if it is delivered evenly across space. Given this strong evidence (stronger than that of spatial inequality and comparable to urban migration), a concerted effort to improve education delivery up to secondary level should be a priority in order to eradicate extreme chronic poverty. Reinstating capitation fees to private secondary school combined with random checks to schools for absentee teachers and ghost students should be considered. Such policies deserve critical empirical examination.

To close, another potential empirical examination is offered. The political economy of local government in Uganda, particularly the creation of local districts, can be usefully examined using this model. The espoused motivation for the decentralisation of government is to put power closer to voters so that local governments can meet local needs more efficiently or respond to them more immediately. But decentralisation, as practised in Uganda, owes as much to the distribution of patronage as to the transfer of power to the local voters.  This transfer requires that the new districts possess the state capacity to use the power to govern effectively. Under appreciation of this requirement can lead to the new districts performing worse, leaving more of their citizens in chronic poverty. This hypothesis is eminently testable and can be explored using the dynamic model. Such empirical examinations can help in enriching the menu of targeting on the way to achieve the goal of eradicating extreme poverty in the country, a promise the world made to the poor.