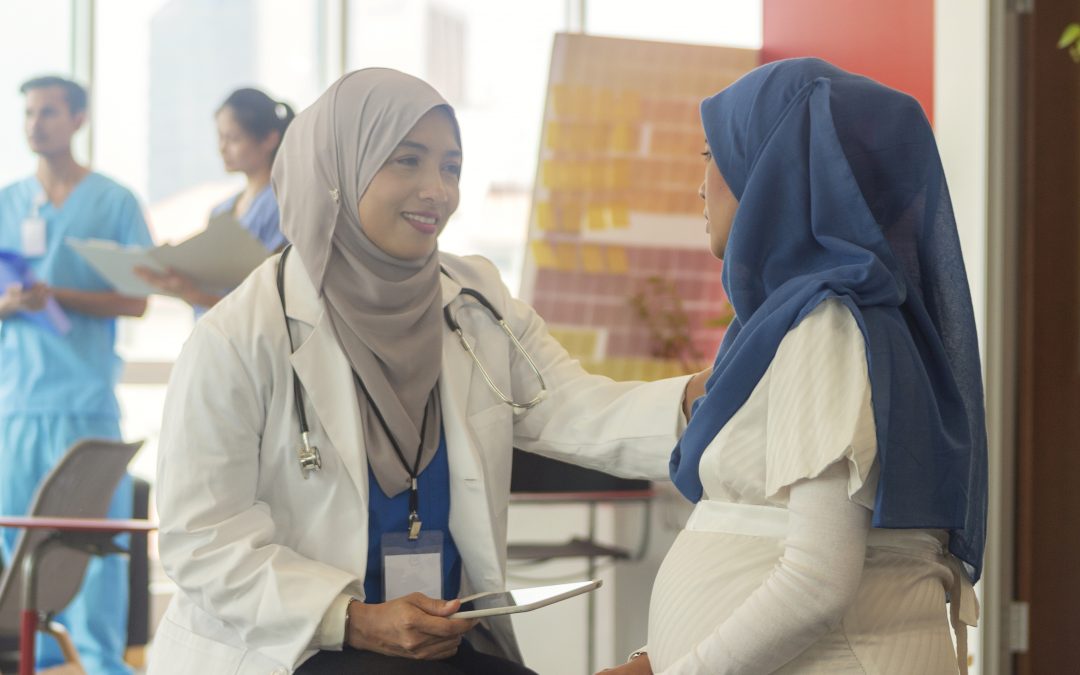 Climate change threatens the next generation, as young activists around the world tell world leaders insistently. The unborn are not exempt. Secular temperature rises, covering pregnancy period, have led to babies born with low weight (less than 2.5 kilograms) in America, while in India, changing rainfalls have led to increased deaths among infants under two. Mitigating this are programmes such as government workfare and community health workers supporting vulnerable young families with incomes and healthcare. Personal actions, however, can help mitigate the harm climate change visits on pregnant mothers. I look at the effects of temperatures and rainfall, daily, during pregnancy on weights of nearly 50,000 births in Indonesia in 2017 to 2019. Then I examine whether mothers’ use of smartphones modifies the effects of climate on the probability of giving birth to a baby with low weight.

In developing countries like Indonesia, temperatures and rainfall affect pregnancy outcome through various paths, broadly forming physiological and economic routes that intersect. These are susceptible to modifications in the hands of pregnant mothers with smartphones. Extremes of heat and rainfall can reduce nutrients intake in pregnant mothers and thereby in developing foetuses. Not only babies were born with low weight, they also become more vulnerable to environmental shocks during the early months of their lives. Although food availability may not be under threat such that wide varieties are available in the market, entitlement to food and other nutrients can still be compromised, especially in their early pregnancy, if commands over resources are unequal to the disadvantage of women (under certain social norms) or if there is limited knowledge of safe pregnancy.

Now if mothers are availed a convenient and sophisticated device like a smartphone, which facilitates social networking and information seeking, will the pregnancy outcome be affected even under a warming planet? If the effect is beneficial for mothers, they can speak of digital dividends.

With widely available earth observations collected by satellites it is possible to examine how climate affects birth weight of babies across the entire 1,300 inhabited islands. This can correct limited evidence on pregnant mothers’ experience from observations in half a dozen sites or islands. Much like evidence in America may not be generalisable to India, evidence from the main island Java may not be generalisable to hundreds of other islands. So earth observations were fetched from NASA (MERRA2) for nearly 500 grid points measured four-by-five eighths degree latitude by longitude. Each observation consists of temperature and rainfall matched with the days of pregnancy for each birth to examine spells of extreme temperatures (33 °C) and rainfalls (190 cm). I augment climate and birth information with personal and family attributes such as education and family incomes and residence over the last five years from national socio-economic surveys 2012 – 2019. 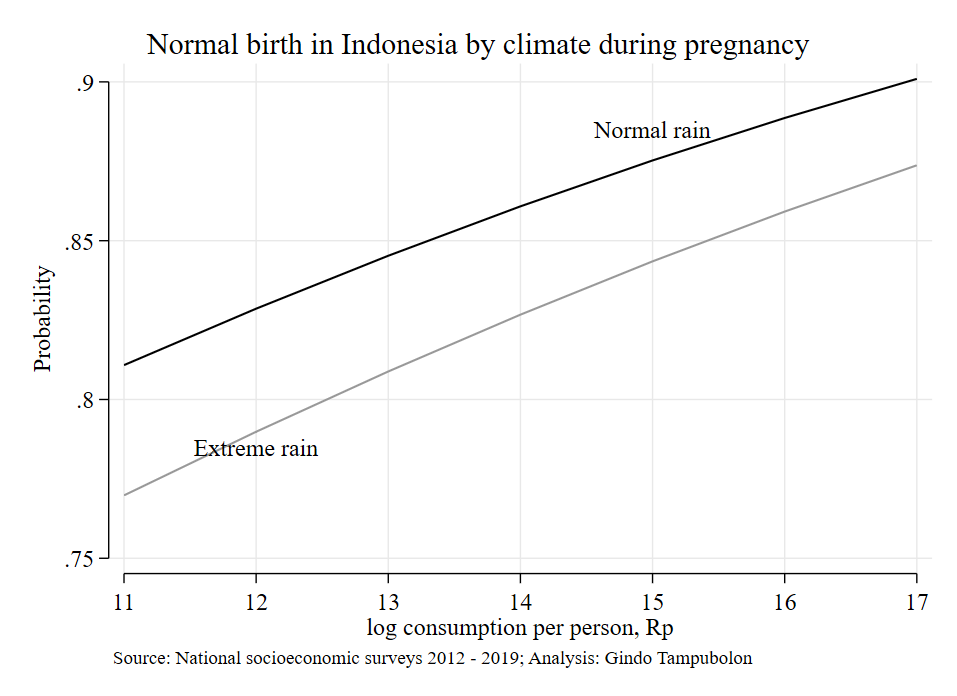 Does this picture change when mother’s use of smartphone is considered? Figure 2 shows the change. The obvious one is this: the difference between the exposures narrows. Whether mothers were exposed to extreme rain or normal rain becomes statistically insignificant. The distance between the two lines narrows; what remaining separation there is in the plot is no difference from pure chance. Mothers’ use of smartphone yield healthy digital dividends in the next generation. 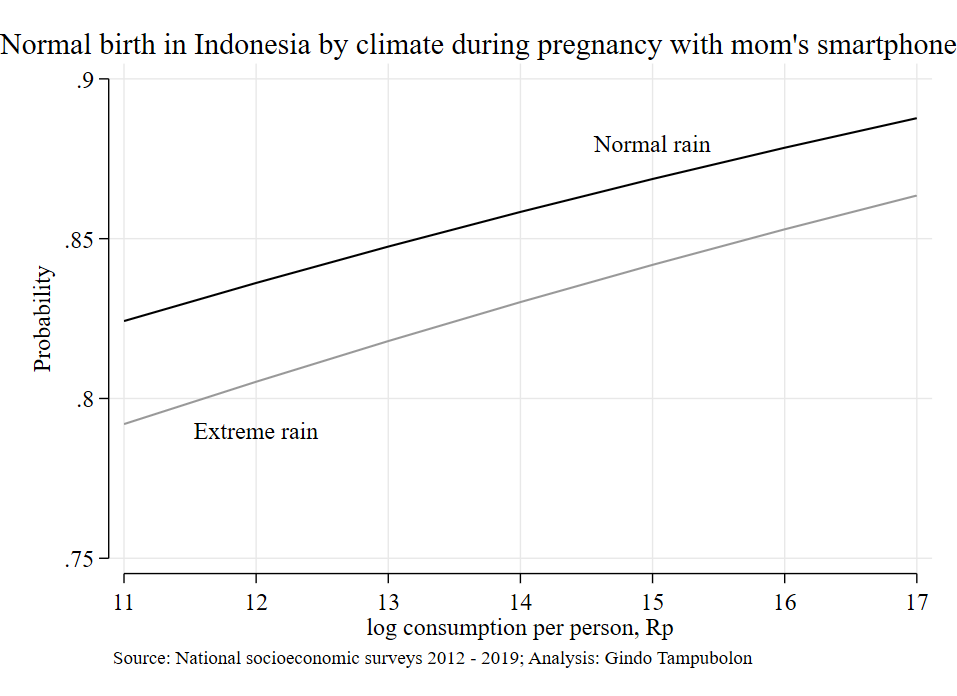 Figure 2. Normal birth (2.5 kilogram or more) by rainfalls, temperatures and personal, family and residential location attributes, as well as mother’s use of smartphones.

How big is the digital dividend across all levels of economic status? This final plot shows the difference accruing to mothers with use of smartphones in terms of the probabilities of giving birth to babies of normal weight. 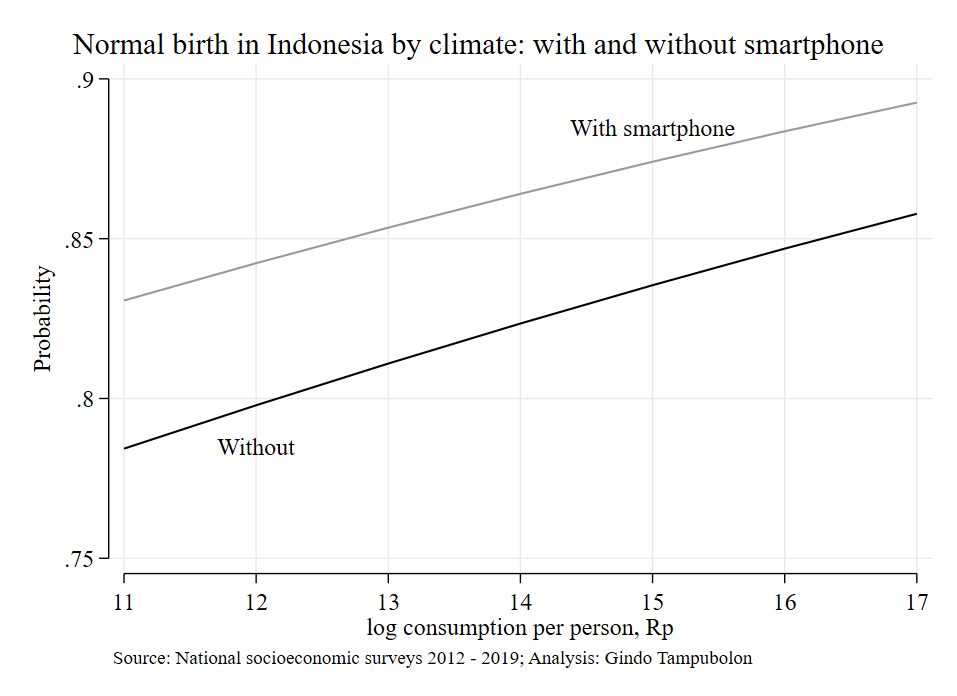 Figure 3. Normal birth (2.5 kilograms or more) by climate, with and without smartphones

Even under the warming planet which exposes all mothers to increasing frequencies of extreme rainfalls, mothers with use of smartphones are giving birth to babies of normal weight with higher probabilities instead of babies with low weight. But the experience of mothers without one is significantly different. They have lower probabilities of giving birth to babies of normal weight by a somewhat larger percentage point than the difference due to extreme rainfall (compare the first and last figures). Pregnant mothers with smartphones are more than compensating the risk put on them by extreme rainfall spells, thus reaping handsome digital dividends for safer pregnancies.