Does inequality threaten trust in science?

16 July 2019 marked the 50th anniversary of the moon landing with Apollo 11. That scientific and engineering pinnacle of planetary exploration has gone on to transform our place in the universe and our understanding of the planet. Much of the challenges we face today like global warming and extreme poverty requires evidence and science for an adequate response. But how much do we trust science when we need it most?

The Wellcome Global Monitor has just released a survey eliciting views on science, vaccination and much else from some 149,000 adults aged 15 and older living in 144 countries on the planet. It asked a series of questions to gauge the trust people have in science.

The Wellcome report constructed this trust in science index based on responses to five questions:

The index ranges from 1 to 4, grouped into high trust (above 3.5 to 4), medium (2.5 to 3.5) and low (1 to below 2.5). The report said that over two-thirds of people worldwide trust scientists and over half do not think they know much about science. Also nearly half of men say they know ‘some or a lot’ about science compared with 38% of women.

A threat to trust?

Given science as an expression of our species exploratory drive and as an ally in responding to global challenges, a threat to trust in science is not to be dismissed. This is no idle threat. The Wellcome report spent some pages explaining how trust in vaccination (another of the pinnacles of science that has saved countless lives on this planet) is being threatened in the public mind. The anti-vaccination movement and their message are ignored at our peril.

So I reanalysed the Wellcome survey, asking two key questions.

The first question was motivated by recent observations that smartphones, exceedingly convenient devices in immersing in social media, are equally pliant in spreading ‘alternative facts’ and hoaxes.

The second question was motivated by a two-step mechanism. First step, a deeply unequal society is susceptible to exclusion and to a strained sense of being together. The larger the proportion of society’s income claimed by the richest group, the weaker the sense of belonging all round.

Second step, if science is perceived to be more associated with the richest, perhaps they disproportionately exploit the applications of science in finance and technology, then this perception when underlain by a keen sense of being excluded can threaten trust in science.

The Wellcome survey provides information on respondents’ age, gender, education, employment, household income, place of residence (urban or not), if and when they learn about science (the definition was adapted from the Science Council of Britain).

For inequality measure, I decided to substitute the common Gini index with the income share of the richest in order to analyse the largest number of countries. The share owned by the richest tenth ranges from 20s percent in Scandinavian countries to 63 percent in the United Arab Emirates. I applied multilevel modelling to the data because the respondents resided in countries (respondents at one level and countries at another).

The results affirmed both questions. The coefficients plot for selected variables shows that age, mobile phone penetration rate and inequality are significantly associated with less trust in science (negative coefficients). On average women had lower trust in science than men, in line with the Report’s finding. 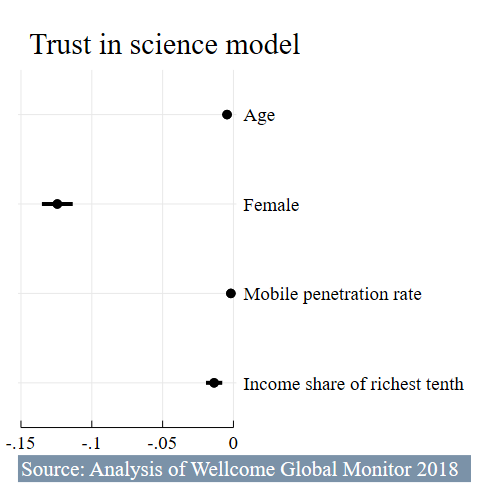 To explore deeper, I draw marginal plots of how trust in science differs for men and women across age, then of how trust changes for both genders across inequality levels. Putting them side-by-side helps us see the magnitudes of the change related to age and inequality. 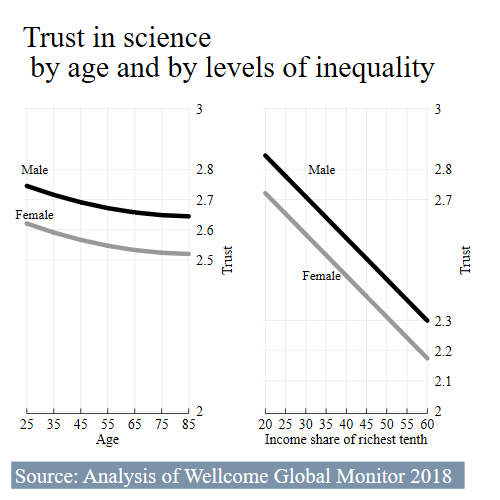 The age plot (left pane) shows that trust in science changes in a non-linear fashion for both men and women, but it stabilized beyond old age. Across the ages, the levels of trust in science sit comfortably within the medium trust zone (2.5 to 3.5).

This contrasts with inequality. The inequality plot (right pane) shows that as inequality increases, from the level of Denmark (24) to that of the United Arab Emirates (63), trust in science dropped from the zone of medium trust to low trust.

This new result cautions that inequality may threaten trust in science. Science is an expression of our species creative identity, not only our unique ally in overcoming global challenges. We risk it being undermined by deepening income inequality.