Inside the UN General Assembly: a PhD perspective 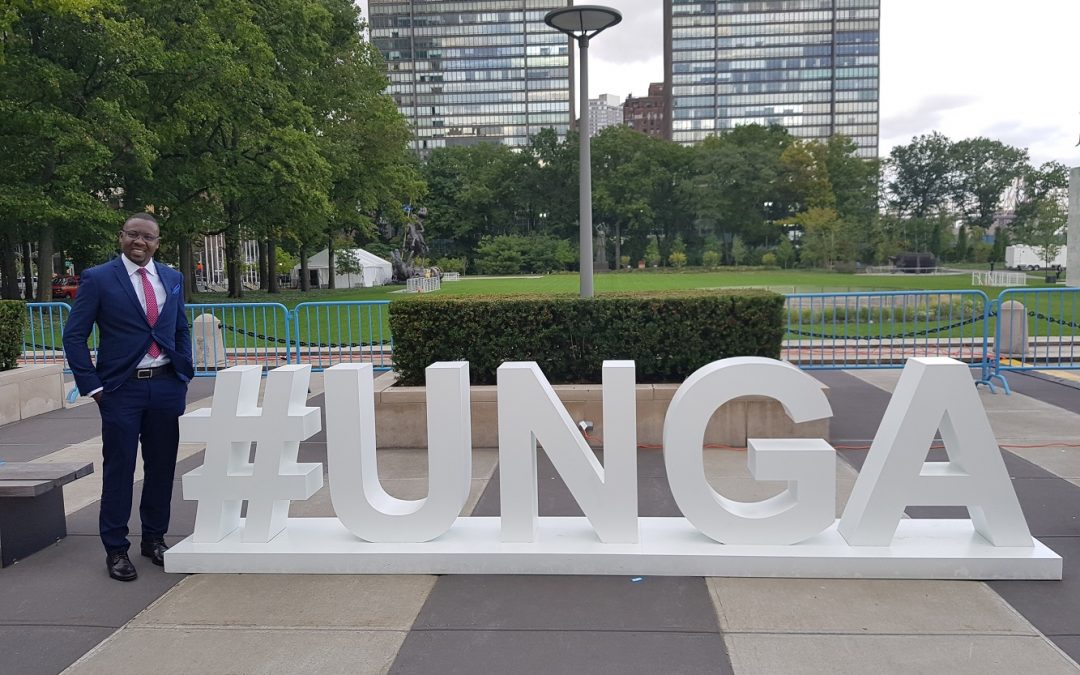 On 24th September 2018, a day before the start of the General Debate of the 73rd session of the United Nations General Assembly (UNGA), the General Assembly convened the Nelson Mandela Peace Summit. The focus of the Nelson Mandela Peace Summit is on Global Peace in honour of the centenary of the birth of Nelson Mandela. The Peace Summit aimed at offering world leaders the opportunity to renew their commitment to global peace, conflict prevention, conflict resolution, peace-building, promotion and protection of human rights and long-term development initiatives.

As part of UN’s principle of inclusiveness, the UN Secretary-General, Antonio Guterres, invited non-governmental organisations, civil society organisations, academic institutions, the private sector, diaspora communities and migrant organisations, to join world leaders attend and participate in the high-level meeting. This was done through applications by organisation to attend. I applied to attend this high-level meeting as a representative of the Global Development Institute, with my application being seconded by the Managing Director of GDI, Prof. Diana Mitlin and the Director of the doctoral College, Dr. Admos Chimhowu

My application was accepted with an invitation from the Secretary-General to represent GDI. I left Manchester for New York on the 23rd of September, 2018. It was my first time in New York, though I have been to the United States earlier in the year for academic conference in Denver, Colorado. One thing I noticed in town was the heavy security presence due to the opening of the UNGA that week. I picked up my pass at the security check point on the morning of the conference which allowed me access to the General Assembly Hall. There was a rigorous security screening leading to the main hall. To my amazement, I found myself walking on the GA corridors with world leaders and various heads of state. The opening plenary began at 9:30 am to 10:30 with an address by the Secretary General followed by the chairperson of the African Union and a representative of civil society. Addressing the Summit, UN Secretary-General, Antonio Guterres urged member states to draw inspiration from Nelson Mandela’s wisdom, courage and persistence to face the challenges of human rights and human liberty. He maintained that, that is the only way to build the just, peaceful and prosperous world envisioned in the United Nations Charter, the Universal Declaration of Human Rights and the 2030 Agenda for Sustainable Development.

After the opening plenary, each member state represented by their heads of state were given the opportunity to make a statement to affirm their commitment to peace-building, human rights and long-term development initiatives like UN-SDGs. At the end of the session, member states adopted the resolution committing to demonstrate mutual respect, tolerance, understanding and reconciliation in their relations. Member States, also reiterated the importance of the 2030 Agenda for Sustainable Development and said that they remain committed to achieving sustainable development in its three dimensions; economic, social and environmental in a balanced and integrated manner. They agreed that sustainable development cannot be realised without peace and security, and peace and security will be at risk without sustainable development.

As a representative from educational institution with research focus in development and sustainability, I found this summit very educating and enlightening and also to hear from firsthand, the pledge and commitment from world leaders and what they have done and are doing to promote sustainable development in their various countries.  Also, I agree largely with the Secretary-General’s preposition that global peace and SDGs are in symbiotic relationship. The summit was also relevant to my research area which dwells on the achievement of SDG goal 6 which advocates for clean water and sanitation. My research seeks to examine the impact of actors in relation to the implementation of Environmental Sanitation Polices in Ghana. Fortunately, I was privileged to listen to the position and commitment of the Ghanaian President, Nana Addo Dankwa Akufo-Addo, on Sustainable Development where my context is situated. The conference ended with a lot of networking and the opportunity for me to speak about my research and the GDI to government delegations and UN employees.