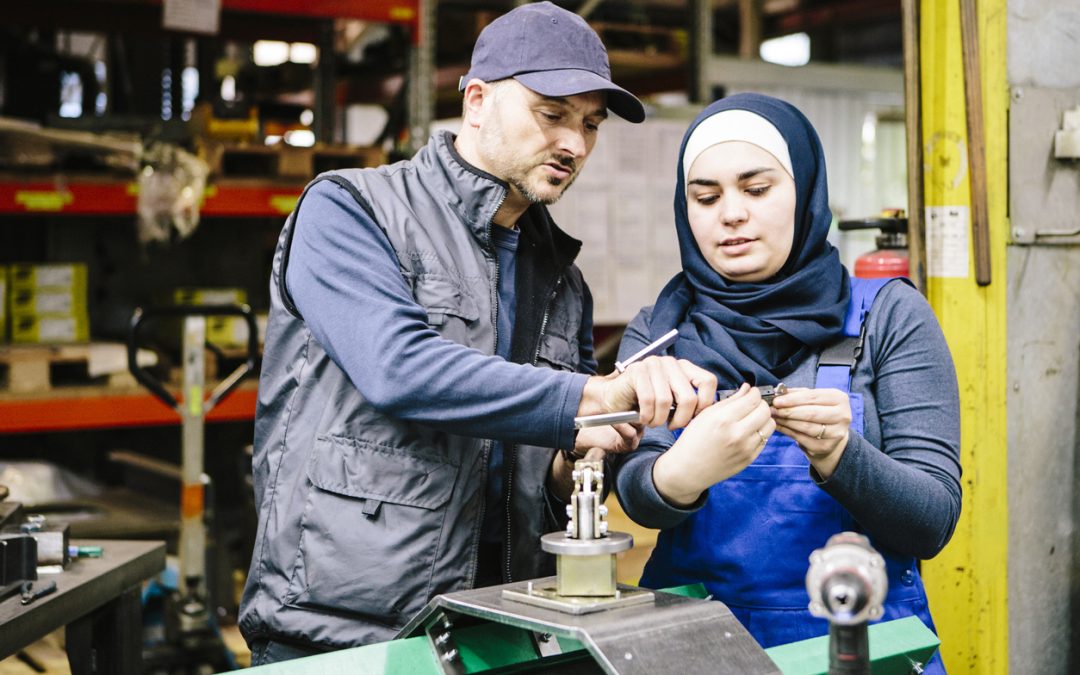 Tanja R. Müller and Lisa Ann Richey have organised two panels at the upcoming International Humanitarian Studies Organisation Conference in Paris (3-5 November) on the theme: Taking ideology out of humanitarianism? The everyday, corporate interests and the politics of global solidarity where Tanja will also present findings of her project on business centre engagement and refugee integration.

We have seen over the past decades how sectors that are not traditionally involved in development or humanitarian action have become key actors. These include for example celebrities of various kinds – think Band Aid and Live Aid – a theme about which I have also written in the past.

This has led to important debates on the nature of the role of the business sector in ‘good causes’ and more specifically in development or humanitarian engagement. Of course, corporate social responsibility has been around for a long time, based on various assumptions about business and its embeddedness in wider society and a responsibility for that society. However, the question remains if a combination of doing good and making a profit at the same time is feasible or desirable.

In the debate on these issues, there is one side of the argument that says in any partnership with corporate actors, this sector will dominate and create or sustain a hegemony that follows a business or for-profit logic to solve developmental or humanitarian problems. This eventually leads to what has been called the commodification of humanitarian sentiment, combined with a neglect of other, often localised development needs in favour of corporate strategies that are ultimately aimed at fostering profit.

A more positive interpretation of corporate engagement states that such engagement tries to solve problems the corporate sector is best placed to solve.

The sentence ‘Wir schaffen das’ (we will manage or cope, roughly translated) is perhaps one of the lasting legacies of Angela Merkel’s  16 years in. Not known for short or snappy slogans in general, she said this in the summer of 2015 after she had decided to allow refugees stranded in various places in Europe and at the German border to enter Germany and apply for asylum there.

The challenge implicit in ‘wir schaffen das’ is twofold: It can be seen as referring to the immediate humanitarian crisis that the sudden arrival of thousands of refugees triggered in an initially overwhelmed German bureaucracy. But it also refers to the longer-term task of creating the resources to help these new arrivals to become part of German society and its future development – and here a key area is how to integrate them into the labour market.

This is where the business sector could have an important role to play, and Angela Merkel did invite around 20 German business leaders into the chancellery in autumn 2015,  to discuss how the business sector could help advance labour market integration. This move is not dissimilar from the global partnerships advocated by the UN and the SDGs – only that here it was not a multinational body but a nation-state government that aimed to draw on a partnership with the corporate sector.

The outcome of this invitation was, in addition to the individual business responses of those not invited to this meeting, the foundation of the ‘Wir Zusammen’ (We together) network. This network operated between 2016-2019 when businesses organised to facilitate refugee integration in different ways and with different time horizons.

Based on interviews with business leaders, trade union representatives and refugees, I have come to some of the following conclusions about this partnership:

Firstly, engagement by the German business sector has indeed not only provided integration opportunities through work but also at the same time transformed refugees’ sense of lived citizenship in Germany.

Thirdly, this support, and more generally business lobbying to grant rights to refugees who are skilled or in employment, has not fundamentally changed the overall environment in Germany. It did not stop the increasingly hostile environment towards refugees among some population groups and in political decision making at various levels as well. In that, one could say that business sector engagement mirrors the bottom-up engagement by activist networks or volunteers: Such engagement has the potential to transform the lives of individual refugees, and to foster voice and dignity. However, it ultimately finds itself subject to the constraints of the wider political system characterised by refugee governance that sees refugees as populations to control for the benefit of the native nation-state.

What the business sector can help to achieve is that refugees themselves have a better opportunity to fulfil their aspirations. Whereas the literature on the response of the voluntary sector in Germany finds that, many people expected gratitude from refugees, and became disillusioned when such gratitude did not materialise. The business sector is different here: it makes an offer that also corresponds to its needs, and as with German apprentices or employees, this offer usually works if employees’ aspirations and company needs match, and they part if it does not. It is thus a means to allow refugees the freedom to live the life they chose, at least in relation to employment.

Overall, locally at least, the business sector can be an important partner for humanitarian and development endeavours. In my project, I focused the empirical work on labour market integration and the businesses that were specifically involved in such integration within Wir Zusammen. Some companies who became part of the network provided a different and, in my view, more problematic response. These companies focused on the immediate humanitarian emergency and provided refugees with for example, IT devices – made by their companies with their company software, thus providing brand placements and arguably dependency together with free publicity as good corporate citizens. I more generally argue, in line with some of the literature critical of corporate sector engagement in humanitarian or development endeavours, that it is mainly a localised response that engages with local understandings and needs but also aspirations of those who were assisted where the corporate sector can be a force for good.

More details on project interviews and the findings are available in these two publications (please email Tanja Müller if you cannot access them but would like a copy):

Find out more about our master’s course on International Development: Migration, Mobility and Displacement.