Oil in Uganda threatens the livelihood of women

In the second of three posts by students, Enock Okara outlines the challenges women  face in accessing compensation for oil exploration.

As Uganda gets closer to the commercial exploitation of its oil reserves in the Albertine-Grabene region north-west of the country, the much anticipated social pressures which the industry has caused on other African countries have started to be felt. The country’s National Oil and Gas Policy specifies the value-addition on crude oil before export and to that end, the government is planning to construct an oil refinery adjacent to the wells.

Article 244 of the Constitution of Uganda gives the government power to access and develop the natural resources of the country as well as the right to compulsorily acquire land in order to facilitate such developments. Accordingly, the government has designated 29 square kilometres of land which will result to the evacuation of people in order to pave for way for the construction of the refinery. The value-addition strategy is expected to trigger other petroleum-related industries and stimulate both local and national economies in what is referred to as a resource led development.

Therefore, to enable the land acquisition process, the government prepared a framework (called the Resettlement Action Plan or simply RAP) to guide the compensation and resettlement process of the project affected persons (PAPs). The general objective of the RAP as stated is “to lay down a framework for managing the loss of economic activities and livelihoods”. Also underlined as a guiding principle of the RAP is “the restoration of the livelihoods of the PAPs to the same or better level compared to the baseline’. Additionally, against the background that women bear the heaviest burden of various social and environmental problems which arise from the oil industry (Oxfam America, 2015), it is laudable that the RAP recognizes women as a vulnerable group “who may be limited in their ability to claim or take advantage of the resettlement assistance” by “decisions of their spouses or caregiver”. Therefore, as a step to stop such potential problems, the RAP affirms that it will “make every effort to ensure that…negative effects are minimized”.

Even so, a closer look at the livelihoods of the women after the RAP was implemented paints a bleak picture. And, if anything at all, the lives of women may have gotten worse than before the resettlement and compensation process was effected. So then, against such a consciously prepared framework, the ultimate question is-what went wrong?

To answer the question would first require the understanding of a few basic issues related to land and customs in Uganda and how they both impact on the lives of Ugandan women. In Uganda, 85 percent of the people live in rural areas most of whom depend on agriculture for their survival. Furthermore, women are noted as being particularly important to the agriculture sector as they account for 80 percent of the total food crop production and more than half of the cash crop production. Whereas that may appear important by any measure, that is just as far as their influence to their households and community goes! In Uganda, customary laws follow a patrilineal system and have it that “property should remain in the male line”.

So essentially, women till land, produce a substantial amount of food for the family but still do not own land nor have control over family assets. Moreover, in some extreme cases, women are also considered as property as is embodied in a question that echoes in most of the rural areas – “how can property own property?”

Land is an important asset in Uganda, and those who own it, make the decisions. Therefore, not only does this situation rip women off their ability to participate and influence decision making processes at the household level, but also makes them financially dependent on men. Schultz (1999) underscores that independent asset ownership can considerably improve women’s bargaining power. Therefore, right from the beginning, it already seems clear that Ugandan women would be limited in their right to fully claim or take advantage of the resettlement assistance when the RAP is implemented.

With that in mind, we can now analyze the RAP and point out some its technical failures which resulted to whole resettlement and compensation process to be an immoral on the well-being of project affected women.

First, in order to facilitate the resettlement and compensation process, the RAP set the 1st of June, 2012 as the cut-off date against which the compensation for investments made on the land would be valued and paid. The cut-off date in its simple sense works this way: any investment made on the land (structures, crops et cetera) before the set date will be valued and compensated accordingly but those made after the set date would not be compensated. Contrastingly, while the valuation of the assets took place swiftly, the compensation money was delayed! The Africa Institute for Energy Governance (AFIEGO) points out that the delayed compensation affected households by creating an ambiguous housing state which forced families to only plant crops which could yield a quick harvest. Similar concerns were also highlighted in a report by the Uganda Human Rights Commission (UHRC) which noted that the delayed compensation was a violation of Article 26 of the Constitution of Uganda which stipulates that citizens can only be deprived to fully use their property rights after a being promptly paid and adequately compensated.

As we noted earlier, a large percentage of households in rural Uganda survive on farming and women are the key players on this front, therefore timely and adequate compensation would be very important in order for the family to plan their next move and secure their livelihoods. Thus, the importance of a swift compensation cannot be overemphasized. 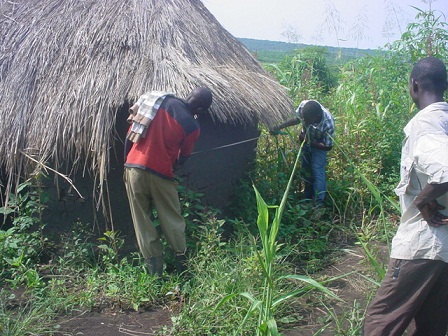 So, the compensation might have been delayed but then, what happens when the money comes? As pointed out earlier, customary laws in Uganda have alienated most women from owning land. This means that, by virtue of men holding the land title, they are entitled to receive the compensation money and decide the next steps on behalf of the household.

To confirm the dire situation and in an attempt to challenge this events, a proposal I made to a Local Council Chairman whom I interviewed in one of the affected villages was met with a soft but firm response, “it is a difficult issue, and we cannot change it for now!”

Levy et al. (2005) emphasizes that soft rules such as customs, operate alongside hard rules such as the constitution and also play a significant role in shaping the interactions within a society. In the Ugandan situation, Ellis and Blackden (2005; p.21) underline that “inequity in marital status and property ownership intersects with cultural attitudes and beliefs to create formidable obstacles to change”. Surprisingly however, the constitution of Uganda explicitly prohibits “laws, cultures, customs or traditions which are against the dignity, welfare or interest of women or which undermine their status’.

To add salt to injury, during a fieldwork mission to Uganda, it was mentioned on numerous occasions by women and men, civil society officials, non-governmental organizations as well as the local government officials that upon receiving the compensation money, men took off to marry other women or blew off the cash in binge drinking! It is little wonder that compensation instead of resettlement by the government was the preferred option by most of the households, and it is rather obvious by now whose decision that was to make!