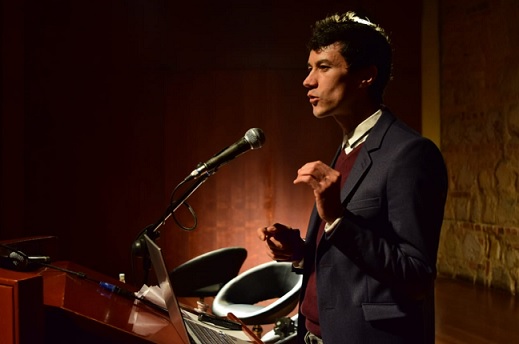 Luis Eduardo Perez Murcia, University of Trento, recently visited the GDI to give a talk entitled ‘I am afraid of dying without seeing my daughter again’: Looking at the Aging-Home-Migration Nexus.

Scholarly research exploring the aging-migration nexus has significantly increased in the last decade. The role of home in this nexus, however, has received considerably less academic attention. Against this background, this paper explores whether and how migration shapes the experiences of home of those on the move and the elderly members of their families left behind in their countries of origin.

Drawing on ethnographic research with transnational Ecuadorian and Peruvian migrants in Manchester, London and Madrid and the elder members of their families back in Ecuador and Peru, the paper argues that migration mutually shapes ideas and attitudes towards home of those who migrate and those who are left behind. An in-depth analysis of the empirical material reveals that many of those elderly left behind struggle to feel at home largely because they experience isolation and even abandonment. Their struggles for home tend to be accentuated when they perceived that the end of their lives is approaching. On the side of those who are on the move, attitudes towards home are often shaped by the sense of not being able to look after the elder members of their families left behind or even visiting them. In some cases, especially for those who work caring after the elderly in their transnational settings, a sense of regret becomes part of their everyday experiences of home because strangers or nobody looks after their own parents and grandparents in their countries of origin. Those who could not attend their parents and grandparents’ funerals tend to see their sense of home irreversibly affected. The presentation ends by discussing how a material and symbolic notion of home may help to advance contemporary debates on ageing and migration.

Luis holds a post-doc research position at the Home-Migration Nexus Project, University of Trento. He is currently looking at experiences of home and home-making practices amongst Ecuadorian and Peruvian migrants in the UK and Spain. He studied for his PhD at the Global Development Institute.

Find out more about PhD study at the Global Development Institute.