Rising Powers at the DSA 2016: China and the rising powers as development actors

By Corinna Braun-Munzinger, PhD researcher at the Global Development Institute 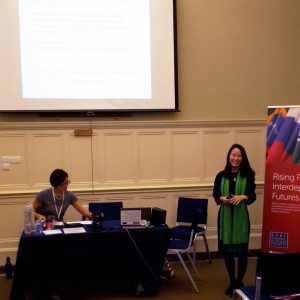 The Rising Powers Study Group of the Development Studies Association (DSA) and the ESRC Rising Powers and Interdependent Futures programme jointly convened a full-day panel at the DSA annual conference in Oxford on 13 September, titled “China and the rising powers as development actors: looking across, looking back, looking forward”. These issues were approached from various angles – ranging from a macro perspective on fundamental shifts in the global world order to the micro-level perceptions of individual development workers in South-South cooperation.

The discussions began from a broad perspective on how the rising powers influence development prospects globally. Rory Horner, University of Manchester, started out by tracing how the traditional distinction between developed and developing countries has become blurred as a result of the emergence of the rising powers, calling for more research on a beginning new era of more universal, global development. Albert Sanghoon Park, University of Cambridge, complemented this forward-looking perspective by taking a look back at the historical geopolitical patterns underlying the developed-developing country dichotomy since the 1940s. Seen from this angle, possible tensions between the ideals and the geopolitics of development are neither new, nor are they likely to disappear with the rising powers taking on stronger roles in shaping global development. Following from these broader thoughts, Anna Wrobel, University of Warsaw focused on trade policy as one specific aspect in which China engages in shaping the global economic order, both through the WTO and through bilateral agreements.

The main theme discussed throughout the day focused more specifically on rising powers’ engagement in South-South cooperation, in particular looking at China and Brazil. One particular strength of the panel was that it brought together diverse primary insights from interviews with individual practitioners engaged in such South-South cooperation projects that again help looking back and looking forward. 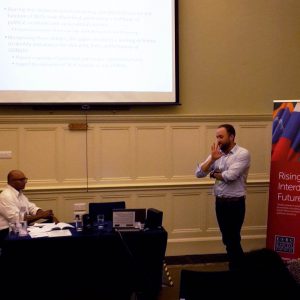 Looking forward, new principles of international cooperation seem to be emerging with the rising powers. Looking at Brazil and Venezuela’s engagement in Caribbean countries, Bethany Tasker, UCL, found that the rhetoric around new principles of solidarity, respect for sovereignty, mutual benefit and partnership was generally believed and seen in South-South cooperation on the ground, even though frustration could emerge in instances where these principles were not met. Similarly, in Chinese cooperation with Tanzania, Xiuli Xu, China Agricultural University found a new paradigm of South-South cooperation based on mutual learning and sharing of development experiences.

However, despite these new principles of partnership, asymmetries between cooperation partners remain. Examples of these appeared in several presentations on China’s interactions with individual countries and with regional institutions on the African continent. On the one hand, Folashade Soule-Kohndou, Sciences Po Paris, discussed the challenges small African countries like Benin face in negotiations with China as a much larger partner and highlighted how and when smaller partners can nevertheless exert agency in such asymmetric relations. On the other hand, contributions from Georg Lammich, University Duisburg-Essen, and Han Cheng, Cambridge University, both highlighted a shift in China-Africa cooperation from the bilateral to the regional level, in particular through the African Union, potentially creating different types of asymmetries of country-to-continent cooperation.

Finally, another aspect that was apparent throughout several presentations is the wide diversity of actors engaged in South-South cooperation. While public discussions of South-South cooperation often paint a straightforward picture of state-to-state cooperation, a closer look shows that things are much more complex. Not only does cooperation take place between government agencies at regional, national and local levels, but also private sector and civil society are playing an active part. For example, Wei Shen’s, Institute of Development Studies, case study highlights opportunities and challenges of private Chinese investment in the South African renewable energy sector. Adding further to the complexity of actors involved, Timothy Hildebrandt, London School of Economics and Political Science, offered a conceptualisation of government organised non-government organisations (GONGOs), which are important in Chinese development cooperation but may not be unique to China.

Overall, the panel highlighted various way in which the rising powers are actively engaging in shaping the landscape of development globally. Nevertheless, presentations also cast some doubt on whether rising powers are necessarily different from established Western powers in all aspects of development cooperation. On the one hand, paradigms seem to be changing, emphasising the mutual learning and partnership aspects of international cooperation, at a time where the distinctions between developing and developed countries are increasingly becoming blurred and new institutions of South-South cooperation are emerging such as FOCAC. On the other hand, some patterns seem to persist, for example geopolitics seems to be an important driver for international engagement for rising powers and Western countries alike, and rising powers are participating in dialogue on global rules in existing fora such as the WTO. Time and further research may be able to tell to what extent the emergence of the rising powers as development actors changes the nature of development and development cooperation that we have experienced so far.