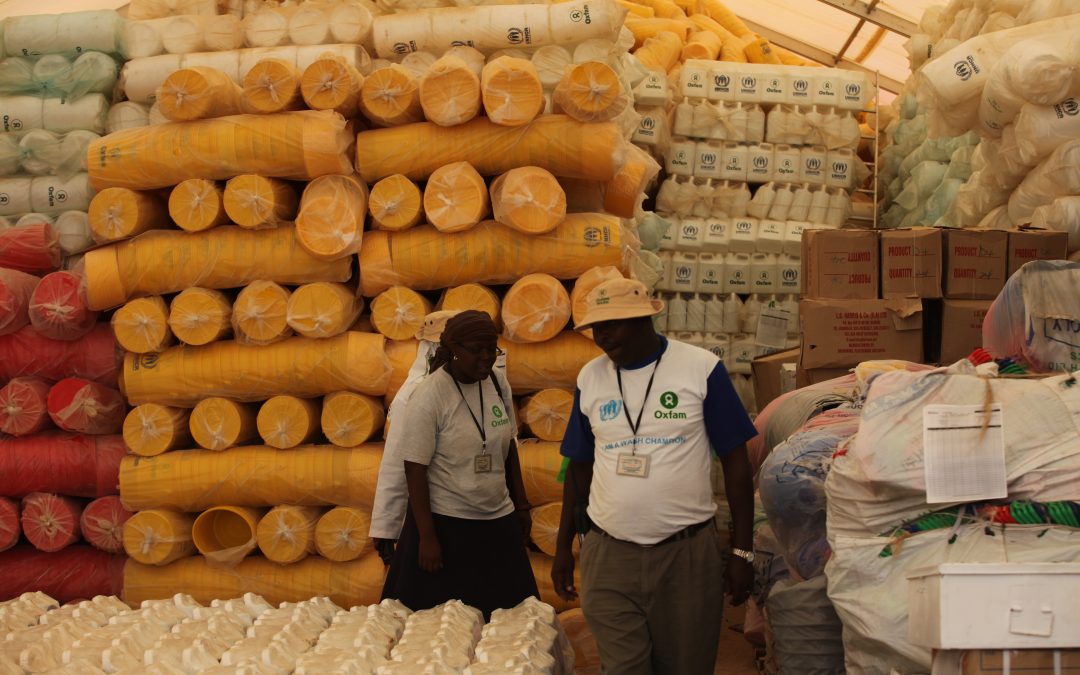 The last 18 months have been some of the most challenging ever for the UK charitable sector, especially those working in international development. As the dust from 2018’s catastrophic safeguarding scandals began to settle, the Covid-19 pandemic hit globally. As demand for charities’ services increased, their work and incomes were hit by the lockdowns and unprecedented economic decline that accompanied the pandemic. Against this background of instability, the UK government reduced its ODA expenditure commitment and slashed provisions to many development charities.

The impacts of the last three years will leave lasting effects in the international development NGO (INGO) sector in the UK and it is important that we try to understand what these are and why they have occurred. That will help us to understand how the sector as a whole can become more resilient in the future. That sort of investigation requires a clear baseline against which recent years can be measured. Fortunately, we have precisely the rigorous baseline we require in the form of a unique sectoral study of British Development NGOs that was recently published in this freely available paper.

Our research in that paper established a panel of nearly 900 INGOs and followed their fortunes from 2009-2015. It showed that British development NGOs constitute a growing, indeed thriving, sector that reached an annual expenditure of nearly £7 billion in 2015. Equivalent to over half of the UK Government spent on ODA that year and exceeding the aid budget of several wealthy countries, this highlights the magnitude of British INGOs to the UK’s overall foreign aid efforts; these are overlooked in traditional calculations. Our research also highlights the sector’s remarkably uneven structure. Only 8% of the sector’s INGOs controlled nearly 90% of the sector’s expenditure in 2015. This unevenness was remarkably stable across the five years under study, despite large increases in income and expenditure across the sector over that period.

Two features stand out in the funding of the sector. First, the UK public is by far the most important source of their funds. They contributed 40% of the sector’s total income in the five years leading up to 2015, totalling nearly £10 billion. Yet, this public giving is not explained by general public giving. Charities Aid Foundation research shows that this giving is too stable and too small, to explain the increase. Further, this giving increases despite declining household income. Both these facts suggest that major donors and richer philanthropists (whose giving is harder for CAF surveys to capture) may be behind public support to the UK development NGO sector. Public support is not the same as popular support. UK development NGOs have been able to cultivate supporters despite a hostile environment. 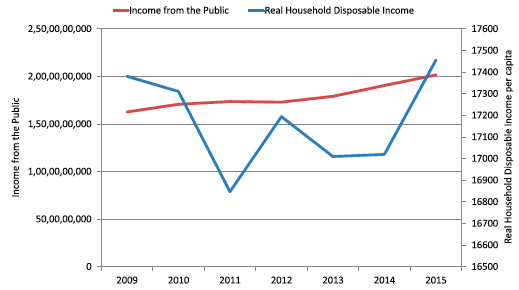 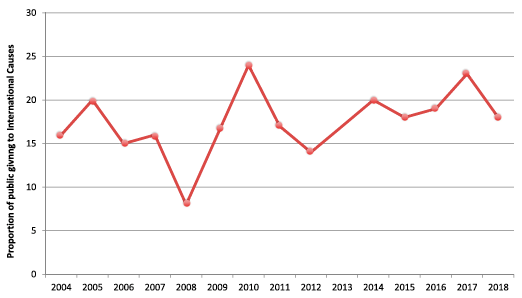 Second, this research also revealed how the distribution of government funds to civil society has changed how Britain’s INGO sector operates. We see a trend of increasing intermediation within the sector as the increased funds channelled directly to the largest INGOs trickles down to smaller INGOs. Directing funding to the largest INGOs has become an important means through which ODA is channelled to civil society, allowing DFID (at that time, now the FCDO) to process the volumes of ODA that they need to shift without increasing their operating costs. This will have important implications for any decline in government expenditure on the sector.

But if that was the case up until 2015, how has the sector fared since then? It takes over 18 months for charity accounts for any given calendar year to become available, which means that we can now see what happened in 2019. This allows us to assess the early impacts of 2018’s safeguarding scandals, from which Oxfam and STC both withdrew from applying for government funds. It provides us with the ideal baseline against which to examine the changes that the Covid-19 pandemic kicked off in 2020.

The basic trend here shows continued growth and vitality. Focussing on English and Welsh charities, for which we have data, there are some (57) which have ceased to exist, through want of funding, mergers, or moving overseas. These tended to be the smaller organisations. In general, expenditure continued to rise into 2019 (Table 1). The sector did take a hit in 2018 as the safeguarding scandals hit, and that was driven by the largest organisations. But it has largely stabilised since then.

Note: figures for 2015 are different from published data because these figures are presented in UK£2020, not UK£2015. These figures only reflect the experiences of English and Welsh INGOs, where data is available from the Charities Commission. Our wider analysis also analyses the fortunes of Scottish INGOs, but we do not have this data yet.

Despite it being the biggest names embroiled in 2018’s scandals, it was the smallest NGOs who were hardest hit moving into 2019. Charities earning between £10,000 and £100,000, for example, lost an average of 15% of their 2017 income in 2018 – and this had dropped to 25% in 2019. Much of the loss experienced by smaller charities came from organisations that ceased to operate. Organisations spending £96 million had disappeared by 2019. If we are interested in organisational, as well as sectoral, resilience to shocks, then we must pay attention to small development charities. They are intrinsically different in how they access their funding (as well as how they operate), and as a consequence have particular vulnerabilities.

As British INGOs began to face the storms of the Covid-19 pandemic in 2020, headline findings based on overall sectoral incomes indicate that they did so as a strong sector underpinned by large volumes of ongoing financial support. But the nature of this support is complex: it comes from different sources, each of which is propped up by different motivations, commitments, and resilience (or not) to economic shocks. INGOs of different sizes experience different vulnerabilities depending on their ‘mix’ of funding, in this respect.

What will the data show happened in 2020-1, when they are ready? We anticipate that this will be difficult to explore. Our friends and contacts in the sector speak of troubling, lean times, with closures, redundancies and retrenchments. Surviving is stressful. But there will be variety. Some organisations will have tapped into streams of public support which do not decline during the trials of a pandemic. Those less reliant on government funding may be relatively inured from the declines in that source. Or it may be that the dramatic unevenness that we see in the sector has built-in greater resilience for the biggest INGOs. This resilience is not just in the larger and more diverse forms of income they have, nor in the bigger stocks of reserves that they likely hold. The increasing intermediation we see in the sector may well open up an additional coping mechanism.

While we will likely see the direct impact of aid cuts very acutely among the biggest INGOs in the first instance (since they receive the majority of government funding), these new sectoral mechanics may offer them the ability to ‘pass down’ these costs by reducing the volume of funding that they channel downwards to smaller INGOs. In this new ecosystem of INGOs, the biggest INGOs are now a donor, as well as an NGO, in the UK context. This will be one of the many interesting and important questions for our research over the next few years as this data becomes available.

We will have our first hint of what is happening in December 2021, when the first tranche of results from the sector are released. In the meantime it may be useful to note that not all of the trends with respect to attitudes towards international development and cosmopolitan causes are dismal. A declining economy, and nationalist government, does not create a universally hostile environment. Despite reports of a decline in public support for international charitable causes, recent evidence suggests that support for international development aid remains strong, and indeed has increased, despite the lockdown pressures and deteriorating political support which might be expected to have reduced support for giving money overseas. In the UK, as pressure has mounted on the 0.7% commitment, so public support for it has suddenly and rather dramatically increased.

Furthermore, the UK’s civic core, which is largely responsible for creating new charities, has not become more parochial and nationalistic. Rather, (and as we have previously shown) its international focus has grown. While registration of new charities focussed solely on work overseas has declined from its peak in 2008, charities that focus on the UK and overseas causes have continued to rise from that same time. UK-only charities, although by far more numerous, have remained relatively stable. 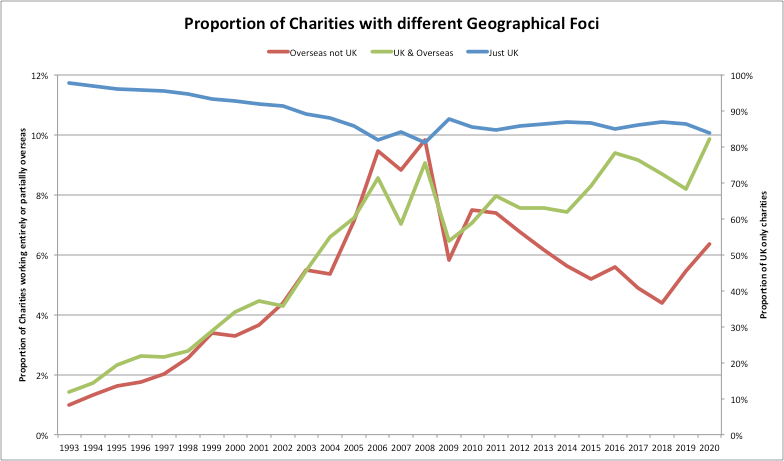 As we seek to learn from the experience of the last three years and to explore the continued challenges that many INGOs face, we look forward to any input – questions, suggestions, corrections, data – from anyone and everyone engaged in the sector. We will be releasing findings as they become apparent and welcome feedback. Please let us know if you want to be alerted to these when they become available.