Who will survive the coronavirus in Indonesia? 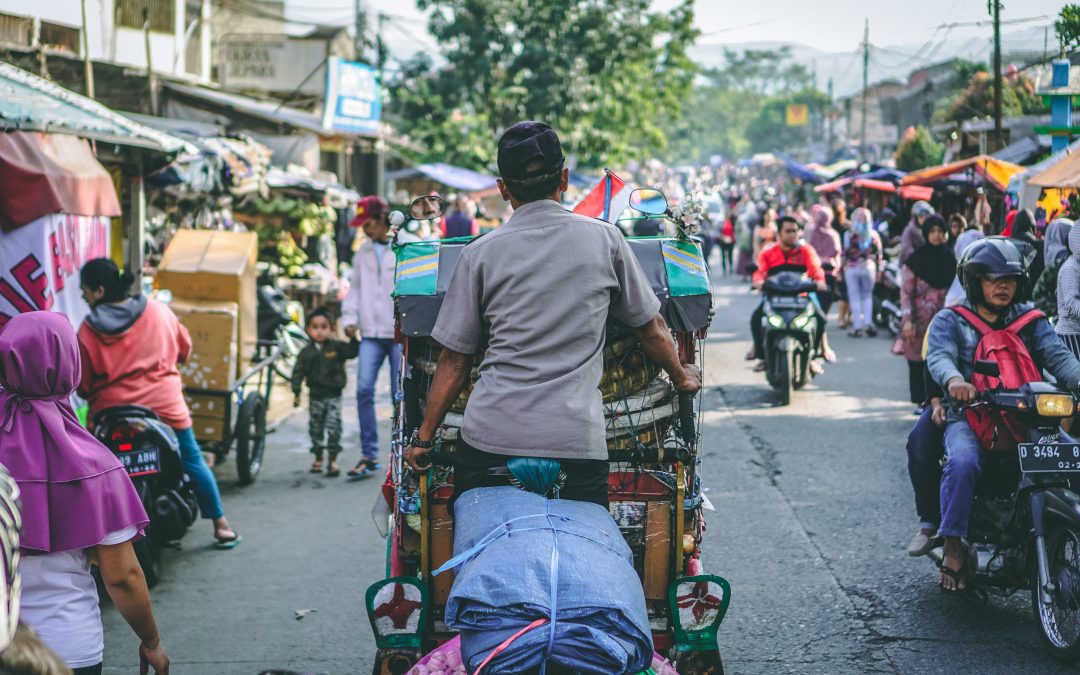 The pandemic of novel coronavirus, SARS-CoV-2, has infected unwitting hosts all around the world. Some estimate suggests up to three in four of a population can be infected with about 4% of those infected contracting a severe level of coronavirus disease (Covid-19), and of those about 1% succumb to death. By the end of March 2020, nearly 30,000 people have died globally. The pandemic is still spreading across countries and within countries. If alarming news from developed countries has dominated the wireless thus far, that from developing countries such as Indonesia is not far behind. And coronavirus can have a catastrophic impact on an already unequal society.

The novelty of coronavirus has caught many countries by surprise. Indonesian health policy did not require the 250 citizens evacuated from Wuhan, the epicentre of the pandemic (BBC News 1 February 2020) to be tested because the returnees were not displaying symptoms. Despite extensive ties with China for business and tourism (such as hosting the first high speed train built abroad by China as part of its Belt and Road Initiative) until the end of the leap month, Indonesia reported zero coronavirus cases. Yet because of the inadequate protocol, all virus carriers slipped, and the virus lodged in communities.

A mathematical study on dynamics and transmission of coronavirus used by the British government’s Scientific Advisory Group for Emergencies, when applied to the Indonesian case with 250 evacuees, suggests that five might have carried the virus. Given the highly infectious nature of the coronavirus, the model suggests that there is more than 60% probability of a large outbreak of Covid-19 (See Figure 1 below: Ekspor kasus dari Wuhan – Number of initial cases from Wuhan; peluang wabah besar – probability of Covid-19 outbreak).

With two colleagues at The University of Manchester, on 1 March we informed Indonesian officials and international agency staffs in Jakarta of our concern and suggested a change to the inadequate protocol. Almost coincidentally, on 2 March the President took to the air to announce Indonesia’s first two positive cases.

Ever since, we have been observing the situation and submitted four lessons that are critical if developing countries like Indonesia are going to adequately respond to the coronavirus pandemic.

First, although its origin is clinical as to threaten lives, the coronavirus crisis is inextricably linked with livelihoods. Some 71% Indonesians work as informal workers. In any day, a civil servant or a formal sector worker is likely to physically interact with at least two informal workers from parking helpers to stall sellers. So, it is in the interest of the 29% to provide livelihoods if this majority of informal workers are to be persuaded to down tools, self-isolate and hence break the transmission of infection.

Reducing the transmission rate to one (the aim of all the draconian measures around the world) is impossible in countries like Indonesia because informal workers cannot isolate since they need to earn their livelihoods by serving people. For them self-isolation simply means hunger and delayed death (all the while watching as their little patch of parking space is usurped by another informal worker looking for a livelihood). Unless of course, social protection such as cash transfers (bantuan langsung tunai) are there to provide a livelihood safety net.

Second, is the critical role of non-communicable diseases. An early recognised signature of Covid-19 mortality is conditions such as cardiovascular disease, diabetes and hypertension. In China where the fatality rate is 2.4%, this rate doubles or triples among those with any of these.

This poses unique dangers. The waves of these non-communicable diseases are lapping at the shores of developing countries. We wrote in 2014 that 70% of Indonesians aged 40 and older are unaware that they are at considerable risk of cardiovascular death. This huge unmet need for cardiovascular care was neglected. Just last year it cost the Universal Health Care system 11.5 trillion rupiah (640 million sterling) to treat the consequences of cardiovascular disease.

Thus, in our submission to officials we urged Indonesia to trigger the work-in-progress universal health care system, BPJS Kesehatan, to urgently contact the beneficiaries of cardiovascular care by short messaging services and urge them to take immediate steps to avoid infection.

Given that the lax protocol is a manifestation of a weak health system, likely equally weak in critical care treatment, avoiding infection among the beneficiaries can mean the difference between life and death. As another evidence on this weakness I turn to data collected by Johns Hopkins CSSEG and put together in Figure 2 positive cases (left) and deaths (right) for founders of the Association of South East Asian Nations (Indonesia, Malaysia, Singapore, Philippines, Thailand). Although Indonesia ranked low on positive cases (left) it ranked first on deaths (right). Indonesia lagged far behind other ASEAN5 in the critical care of Covid-19 patients.

Given the limited ability of the health system to care for them, survival for those with non-communicable disease is highly dependent on them not getting infected.

Non-communicable diseases such as diabetes or cardiovascular disease are increasing in developing countries, so this group of people should be strongly encouraged to adopt necessary steps to avoid contact and infection including, if necessary, the provision of cash transfers for informal workers among them. 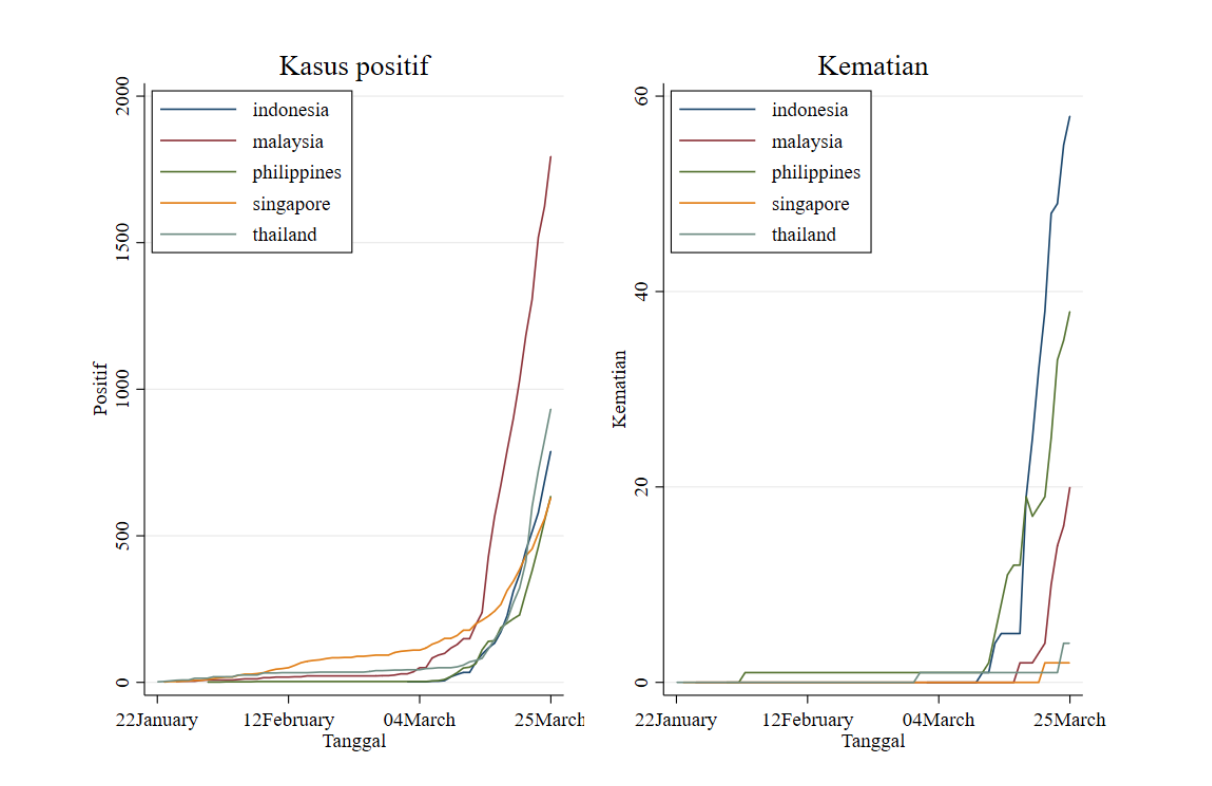 Third, another signature of Covid-19 mortality which has been well-aired is its age discrimination. Unlike influenza which is fatal for the very young and the old, Covid-19 has been particularly fatal for the old (70 and older). But focusing on the old may be misplaced. Younger Indonesians, say 40-55 years old, are actually at greater risk because they are likely unaware of their needs for non-communicable disease care. Many are not aware of their diabetic or hypertensive conditions, let alone keeping them under control. Therefore, in our submission we noted that the focus on the pensioners may inadvertently leave a younger section of the population unguarded and vulnerable.

Given that the unguarded are the prime age workers, the misplaced focus can be devastating for their survival and the economy. This makes the economic and the clinical impact uniquely, inextricably linked in developing countries.

Last, nearly all countries are affected. Therefore, collaboration across countries is needed to respond to this borderless existential threat. Some countries have responded remarkably well, including China, Singapore, South Korea and Taiwan. On Taiwan, The Economist suggested an overdue recognition for its success after an earlier tepid response by the World Health Organisation. Indonesia has a surfeit of examples to learn from, covering the range from authoritarian to democratic spectrum. All four countries possess a capable bureaucracy that can deliver swift response to a novel threat. Can Indonesia and other developing countries mimic such a response with their existing public services?

Photo by Fikri Rasyid on Unsplash