COP26: A Tale of Two Conferences 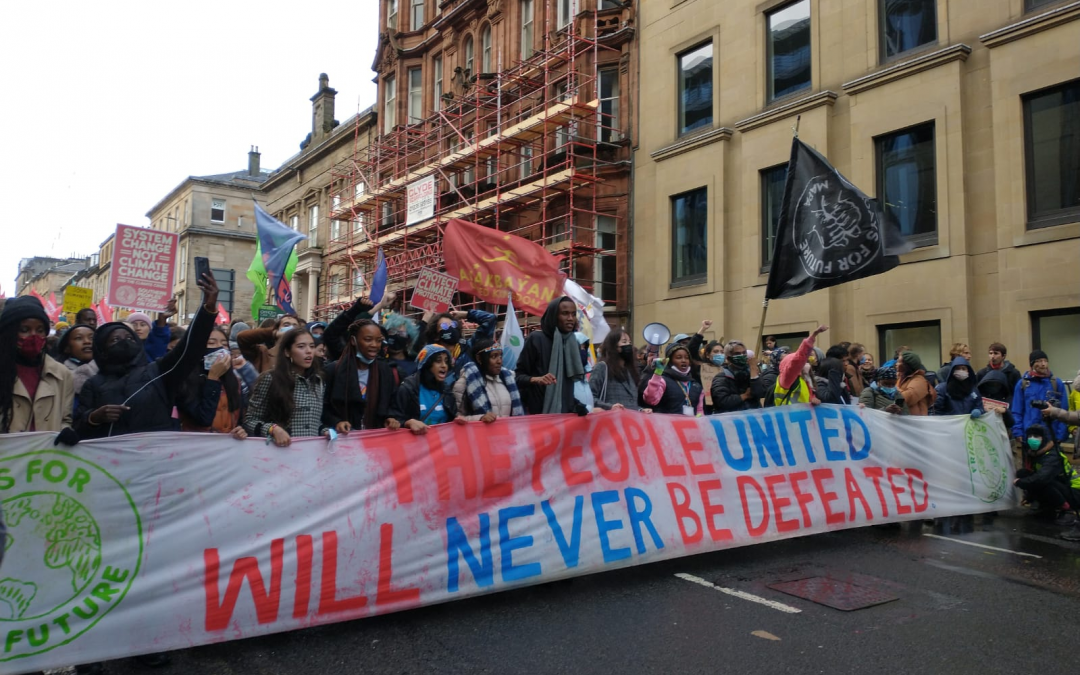 November in Glasgow typically marks a retreat to the indoors from the often harsh and unforgiving Scottish weather conditions. However, this November was different, as the streets flooded with raincoat clad climate activists in anticipation of COP26. The aptly named “Green Place” was deemed an appropriate location for COP26, the 26th annual United Nations climate conference. In the wake of this years’ urgent IPCC climate report, labelled by U.N. Secretary-General António Guterres as a “code red for humanity”, underscoring the unprecedented action required by global leaders to keep us at the 1.5°C of warming which is deemed our safest “livable” alternative.

With COP26 deemed humanity’s “best last chance” to avert catastrophe, and the hopes of millions across the world resting on the decisions made therein, some classmates and I headed to Glasgow, among many thousands of other activists, to voice our concerns about climate inaction, and in particular, climate justice. Yet, despite hopes for a COP which could “build back better” from the last year of economic turmoil for everyone, hopes wore thin from the outset, with activists labelling the event “one of the most inequitable, White, and segregated COPs to ever occur”.

Conference of the Polluters?

In the month running up to the conference, the Climate Action Network called for COP26 to be postponed due to a lack of affordable accommodation in Glasgow as well as evident disparity in vaccine availability to attendees who required such for visas. As accommodation prices soared, my classmates and I relied on our extended networks to provide us with somewhere to stay for the week. While I landed lucky with a couch bed, the range of “less conventional” accommodations listed from a squat to a garden shed.

These barriers in affordability and accessibility were described by activist Ayisha Siddiqa as emblematic of the broader injustice in climate conversations, whereby frontline communities who are the most vulnerable to climate change, despite emitting the least carbon, have not been able to participate meaningfully in negotiations. In the meantime, the Blue Zone – which remained inaccessible for observers like myself – was quite inclusive of the fossil fuel delegation, with 503 fossil fuel lobbyists being granted access. To give context, this outnumbered the delegations sent by any single country and represented more than double the UN delegation for indigenous peoples globally.

Having made a late decision to join the conference, highly sought-after observer tickets for the Green Zone were also limited by the time of my arrival. By Tuesday of the second week, as attendance numbers slowly dwindled, I successfully gained entry to attend talks on topics of indigenous knowledge and migrant justice. To my disappointment, the Green Zone mostly felt closer to a flashy, promotional trade show than a space of crisis talks for a world on the brink of collapse.

The limitation of frontline voices appeared all the more glaring in the face of corporate strategies which all but exempted their existence. Delphine Williot of Fashion Revolution, criticised fashion brands’ focus on innovative sustainable materials and net-zero strategies while failing to hold themselves accountable for “the lives of millions of workers, in countries like Bangladesh, who will be displaced because industries like fashion failed to take tangible action to mitigate their impact on the planet and people”. Justice challenges like this were evident across the Green Zone, as corporate sponsors like Scottish Power and Hitachi stood at expensive installation pieces, outlining their ambitious plans to solve a crisis they had massively contributed to causing. Furthermore, as green technologies dependent on intensive mineral extraction were the sum and substance of most of these plans, it was hard not to consider how this could be justly achieved with a mining sector already so dogged with human rights violations?

Conference of the People?

“We cannot expect the people in COP to bring the changes, because they are the ones who created the problem”, commented Yvonne Blake of Migrants Organising For Rights and Empowerment. For this reason, many activists were thankful for the opportunity to attend the alternative schedules at the People’s Summit for Climate Justice, hosted by the COP26 Coalition, an expansive collective of UK-based civil society groups mobilising to bring together global movements and NGOs with the goal of strategising towards systemic change.

The People’s Summit took the position of prioritising voices that were otherwise excluded from COP: of indigenous peoples, women, people of colour, people with disabilities and young people. Efforts to be inclusive were evident in the daily coronavirus testing required to make the space safe for those from the Global South who had not yet been afforded the vaccine. Workshop style events encouraged audience participation, inviting a cross-contextual dialogue between communities on climate strategies, which challenged the structural status quo while keeping the historically excluded at the heart of the conversation. The resulting atmosphere was one of community rather than isolation, where every voice had a role to play in dealing with the challenges ahead.

This spirit of comradery culminated in November 6th’s Global Day of Action for Climate Justice. While world leaders’ negotiations continued, sheltered away in COP’s Blue Zone, over 200,000 activists took to the streets of Glasgow. The energy was infectious as what felt like an endless sea of people, pushed back against relentless wind and rain, holding banners high and chanting spiritedly, despite the overbearing police presence, towards Glasgow Green. This march was one of an estimated 300 similar protests globally, representing the growing tide of individual activists and grassroots movements who are no longer content with the neglectful pace of international leadership in dealing with this crisis. 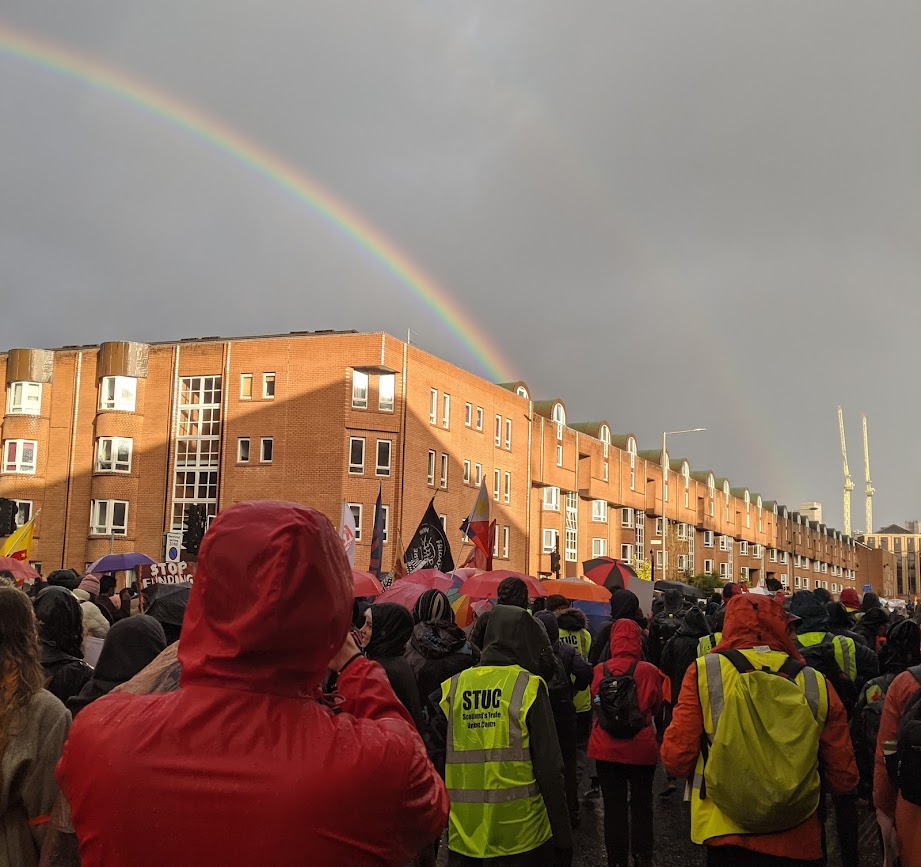 Hope for change in Glasgow was derived for most activists from events occurring outside, rather than inside the COP official zone

As the two weeks ended, many branded this year’s COP a failure. The final day of the COP proceedings was marked by a large civil society walk-out from the Blue Zone, in protest of the lack of substantive change. The COP26 President, Alok Sharma, even ended the convention with an apology, for last-minute changes made which watered down international commitments on the phasing out of coal. Despite the many lofty speeches made at the beginning of the session, the ending of the session descended into squabbling amongst rich nations over vital compensation to vulnerable nations for “loss and damage” and disagreements over carbon emission cuts. The final agreement lands us at 2.4°C of warming, with all commitments fulfilled – a far cry from the 1.5°C required. Scientist Kevin Anderson aptly described the growing gap between politics and activists at COP:

“There’s planet politics, which is where you get these grand speeches and the climate glitterati flying in, making wonderful high-level statements which are pretty much vacuous nonsense. And you’ve got the other side of COP, which is where — whether it’s the scientific community or some of the civil-society groups, they’re talking about the scale of the challenge to meet the commitments that the policymakers have previously made, at previous COPs. These are two separate planets with almost no connection between them.”

Yet, against all odds, I left COP26 with a sense of hope. That hope was not borne of ostentatious politics or the grand geoengineering solutions proposed by tech giants. It was rather borne by the tenacity of the 200,000 global activists on the streets of Glasgow, whose chants still echo, that another world is possible, where justice can come from these looming challenges. That world will be built by strong communities, by the cross-national collaboration of individuals with a variety of skills, and importantly, by direct action.

Author Andreas Malm warned that at Egypt’s COP27, a country with a history of cracking down on peaceful protests, activists may not get the opportunity to voice their concerns as openly as they have in Glasgow. For this reason, as the politicians begin preparations towards COP27, this year it will be more important than ever for activists to make their presence felt wherever possible to demonstrate that they will not be going anywhere.

Top image: Fridays for Future’s Most Affected People and Areas group took to the streets of Glasgow alongside 150,000 activists for November 6th’s Global Day of Action for Climate Justice. Photo credit: Caelan Knight.