Countering “divide and conquer” to build a human economy for all 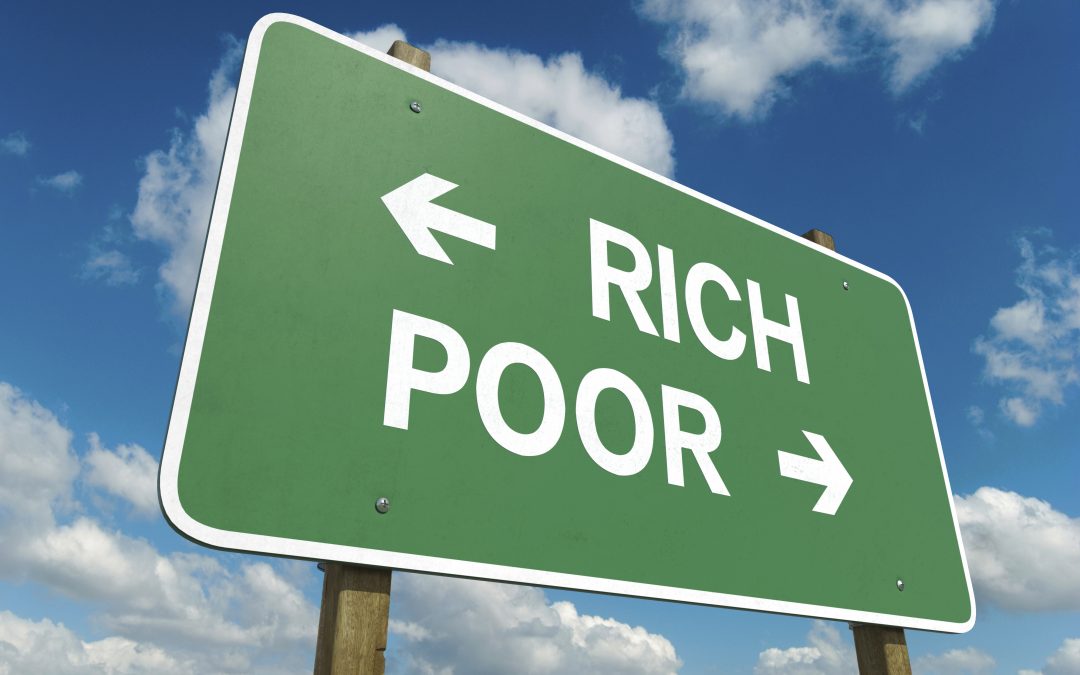 Have we all been “divided and conquered” by the super-rich? Political divides and polarisation were highly apparent in the UK and the US in 2016, and are highly prominent elsewhere in Europe. Votes for Brexit and Donald Trump have brought renewed attention to major cleavages within society – along economic, social, cultural, urban/rural lines. This has fostered disagreement and tensions amongst people who encounter each other in their daily lives, distracting attention from the almost mythical super-rich, with their almost impossible-to-relate-to amount of wealth. While such divides amongst the 99% (or even 99.9%) have grown and need to be addressed, stealthily the global super-rich seem to get wealthier and wealthier.

Oxfam’s flagship annual report of global inequalities, timed to coincide with the Davos World Economic Forum meeting reveals its most shocking-yet figures in terms of global wealth inequality – the combined wealth of the wealthiest 8 people (all men) on the planet is equivalent to that of the bottom 50% of the global population. The report valuably refocuses attention on where the starkest inequalities lie – between the super-rich and the rest. 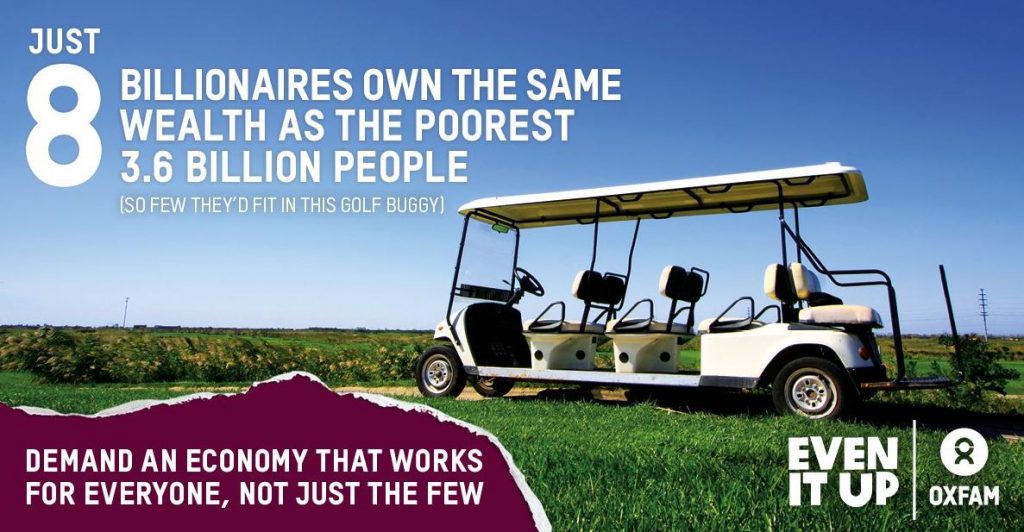 The report contains a range of staggering statistics on various inequalities. A few that stand-out include:

Oxfam’s wealth statistics and interpretations are often critiqued. Critics like to point out that wealth is not income or consumption. For example, someone who just graduated from Harvard Medical School could be in the lowest decile of global wealth, yet this could be a very short-term position as they are likely to be very high up the income distribution. Americans with a lot of debt, but potentially high income and consumption, can then be found amongst the lowest 10% of global wealth.

A box in the report (p. 11) on the wealth inequality calculations addresses these critiques and clearly explains the methodology (based on data from Credit Suisse and Forbes billionaires list).

One wealth statistic Oxfam’s report doesn’t mention, but which the Forbes billionaire’s list also shows, is the shifting geographical composition of billionaires – a rapidly growing portion are from developing countries. The figure below, from my ongoing research with David Hulme, on contemporary global development, depicts this growing share. 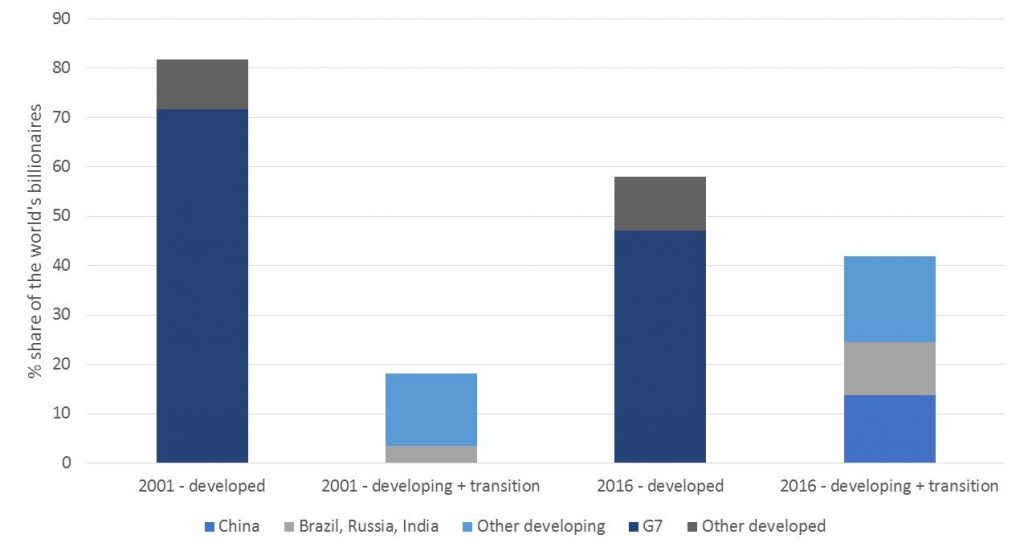 This shows the growing extent of a significant disconnect between the super-wealthy and the societies in which they come from. Moreover, despite a slightly more even spread of aggregate incomes, jobs, prosperity, across countries – what some are calling a “great convergence”, much of this benefit is accrued by a small minority of the population. Extreme inequalities are thus a global problem – within and across societies.

Oxfam has previously (and already this year) been accused of mis-directing attention from the economic bottom-half of the world’s population to the global 1%. The 2017 report does note progress in terms of reduced numbers living in extreme poverty by official measures, especially driven by China and India. It could also be added that some research by leading inequality researchers such as Branko Milanovic and Francois Bourguignon – albeit using measures which are less attuned to capturing the extremes at the high end of the scale – finds somewhat of a reduction in global income inequality across individuals has taken place in recent years (driven by growing incomes in China and India particularly). Such research still points to vast income inequalities. Oxfam suggests that without such extreme concentration of wealth, much more progress could have been made in addressing extreme poverty.

Rather than mis-directing attention, Oxfam’s report is a shocking reminder of, and valuable signal to, where the starkest inequalities lie: the divide between the 1% (and even the upper fractions of it) and the 99%. Rather than income streams relating directly to how hard or well people work at a particular occupation, as Thomas Piketty as shown, wealth has growing significance in the global economy. As well as the headline wealth statistic, the Oxfam report presents a shocking collection of facts about other extreme inequalities related to wages, gender etc.

Development “goods” – wealth and income being key – are overwhelmingly accrued by a small portion of people. Development “bads” – as Oxfam’s work on carbon inequalities has shown – are also contributed by those same people.

While super-rich individuals and corporations are begged to come to different countries (the report notes various such incentives), refugees are often forcibly kept out and even blamed for increasing inequality.

Differences among the 99% have been invoked and publicised fostering battles amongst the vast majority. In the US, this week a President who has sought to invoke addressing those “left behind” will be inaugurated. Without question, he will continue to divide the 99% and overlook the 1% (and its extreme upper end) which he and his “billionaires and mere millionaires” cabinet are part of.

In line with attempting to construct a positive vision of an “economy for the 99%”, Oxfam make a number of valuable suggestions, including:

To make such suggestions work will require a countering of the “divide and conquer” by the super-rich, with a mobilisation within and across countries.

Most countries have sufficient resources domestically for there to be considerable scope within countries to address inequalities. While this has long been the case in the Global North, it is increasingly the case in the Global South. One recent analysis suggests that more than 75% of global poverty at lower lines could be eliminated via domestic redistribution funded by new taxation and reallocation of public spending.

Yet, international coordination is vital too. Oxfam suggests “governments must cooperate” and this point couldn’t be amplified enough. To be clear, much previous international cooperation has been mis-directed in the interests of the super-rich- making things easier for certain companies, but not for many people or for many small businesses. Rather than an abandonment of international cooperation – or a retreat from globalisation takes which could equally be skewed to restricting certain mobilities and favouring the highly mobile super-rich – a reformulation is needed. Action on corporation tax and a wealth tax can only fully work with such international coordination.

Surely nearly all of us can agree that such extreme inequalities are unwarranted and unjust? To move away from being “divided and conquered” by the super-wealthy, a much more unified approach within and across countries is needed. Oxfam’s 2017 report is a timely reminder of that.