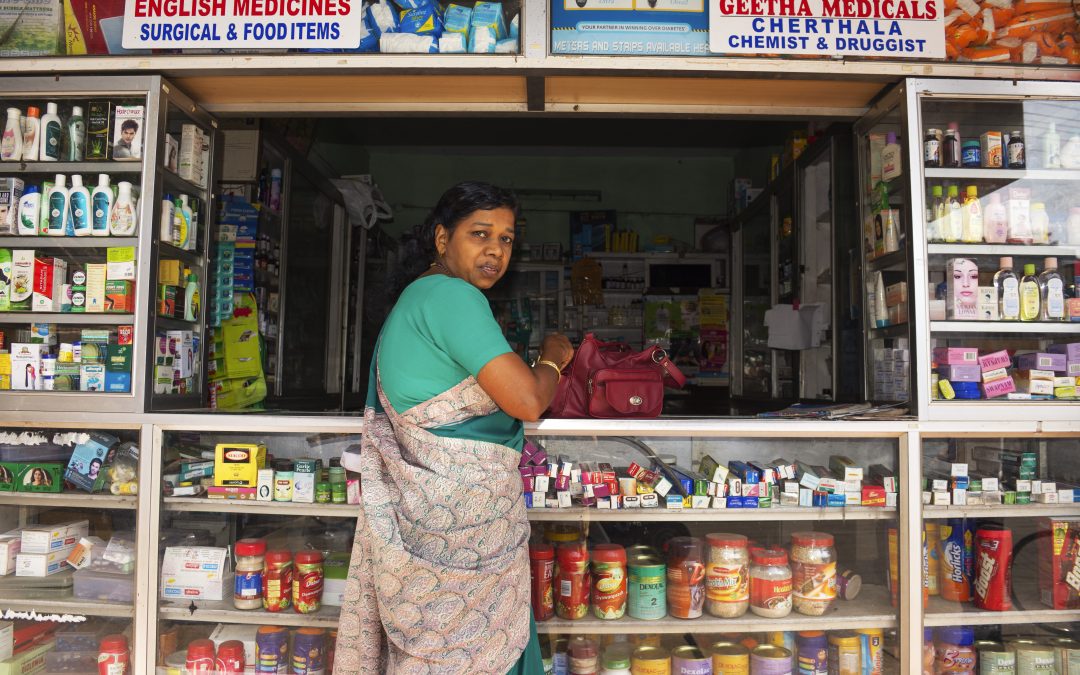 By Dr Rory Horner, Lecturer in Globalisation and Political Economy

In a new paper published in Global Networks, Rory Horner and Jim Murphy argue that significant discontinuities are present between the business practices Indian pharmaceutical firms deploy in South-South production networks vs. those in South-North trade.

The geography of global trade is shifting rapidly, with actors in the global South playing much more prominent roles as both producers and consumers in global trade. South-South trade has expanded rapidly, yet South-South value chains and production networks have received less attention than North-South oriented value chains to date.

India’s pharmaceutical supply, often termed the “pharmacy of the developing world”, is one of the most crucial, and fascinating, examples of South-South trade. More than 50% of India’s pharmaceutical exports by revenue, and even more by volume, go to other countries in the global South. They are significant economically, but perhaps even more importantly for public health – having the potential to increase access to medicines through relatively low-cost generics. Yet, although it is well-known that large volumes of pharmaceuticals are exported from India, relatively less is known about the underlying supply chains. 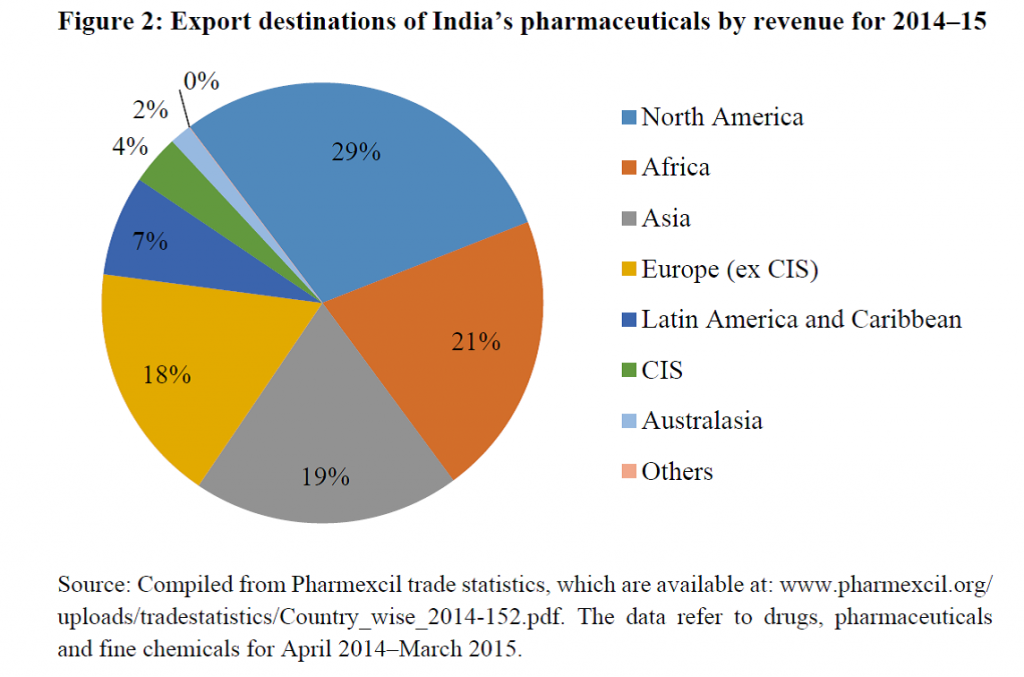 Figure. Export destinations of India’s pharmaceuticals by revenue for 2014-15

Drawing on a large number of interviews conducted with large, medium and small-scale firms, we took a systematic, inductive, practice-oriented approach to understanding the globalization strategies of Indian pharmaceutical firms.

We found significant discontinuities between the practices deployed in the industry in accordance with whether the supply is oriented towards Northern or Southern end markets. Key differences are present in quality standard requirements – sometimes simplified to a distinction between “regulated” Northern markets, and less or “semi-regulated” Southern markets – which create some degree of market segmentation.

Yet the differences go beyond that and relate to a whole variety of distinct production and quality practices, market access and innovation strategies that Indian pharmaceutical firms use to reach different end markets.

To supply Northern end markets, many large Indian firms possess, for example, USFDA or UKMHRA approved quality standard-approved plants for particular drugs, have globalised aspirations and image management, significant financial resources and capabilities, have partnerships with Northern MNCs, have their own manufacturing and even R&D facilities in Northern markets, have dedicated R&D investment and are keen to be seen as innovation-oriented.

In contrast, to participate in Southern markets, with lower quality requirements, firms find lower entry barriers, often have a short or medium-term outlook, produce drugs from separate plants for those from Northern markets, often have key relationships with Southern trading companies, and have very little dedicated R&D facilities or degree of being innovation-oriented.

This research challenges any singular notion of the Indian pharmaceutical industry and its supply of medicines, pointing to significant heterogeneity. The table below highlights some of the key discontinuities in value creation, enhancement and capture strategies. 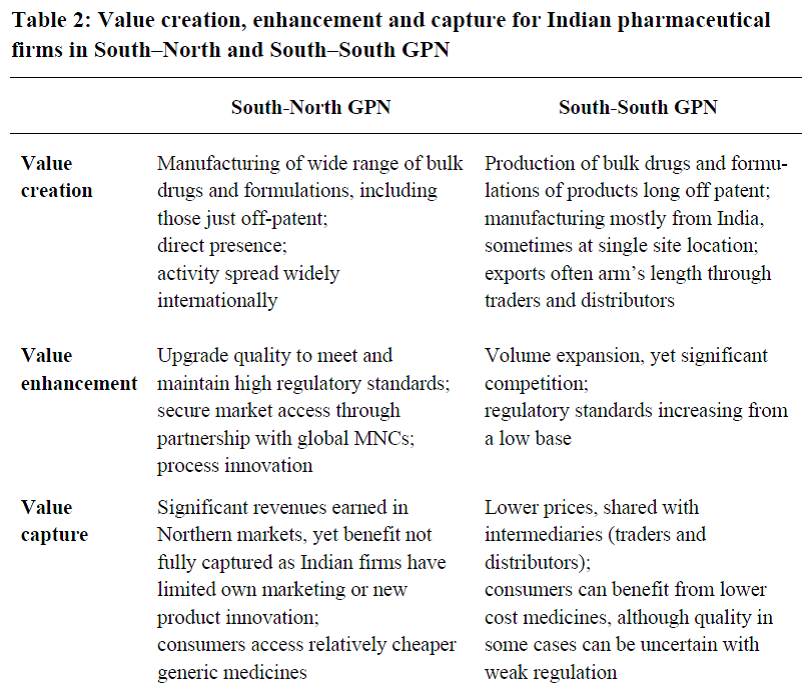 In short, we highlight the significant discontinuities within the industry, particularly between supply to Northern end markets and that to domestic or South-South markets. These differences are related to, but go beyond quality control certifications, and involve a range of production, market access and innovation practices.

There are other significant aspects of variation within the Indian pharmaceutical industry, for example between different companies, between formulations and bulk drugs production, between large and small firms. Moreover, some large Indian firms also supply medicines through a chain not discussed here; via donor organisations such as the Global Fund. Yet, those differences pointed to here are the minimum requirements to participate in these chains.

From an analysis of these practices, it appears both South-North and South-South networks have their benefits and limitations, with a need to find industrial and public health balance between high-cost and often inaccessible supply to Northern markets and cheaper, but sometimes weakly regulated, South-South trade in pharmaceuticals.

Much further research is needed to unpack “India’s pharmacy to the developing world”. I am currently exploring such issues further in an ESRC-funded project on “India’s pharmaceuticals and local production in sub-Saharan Africa”.

The paper was originally presented at a workshop on “Global production and local outcomes”, held in Manchester in June 2015. It forms part of a special issue, edited by Rory Horner and Khalid Nadvi, on “Global production networks and the rise of the global South”, which is forthcoming in Global Networks.