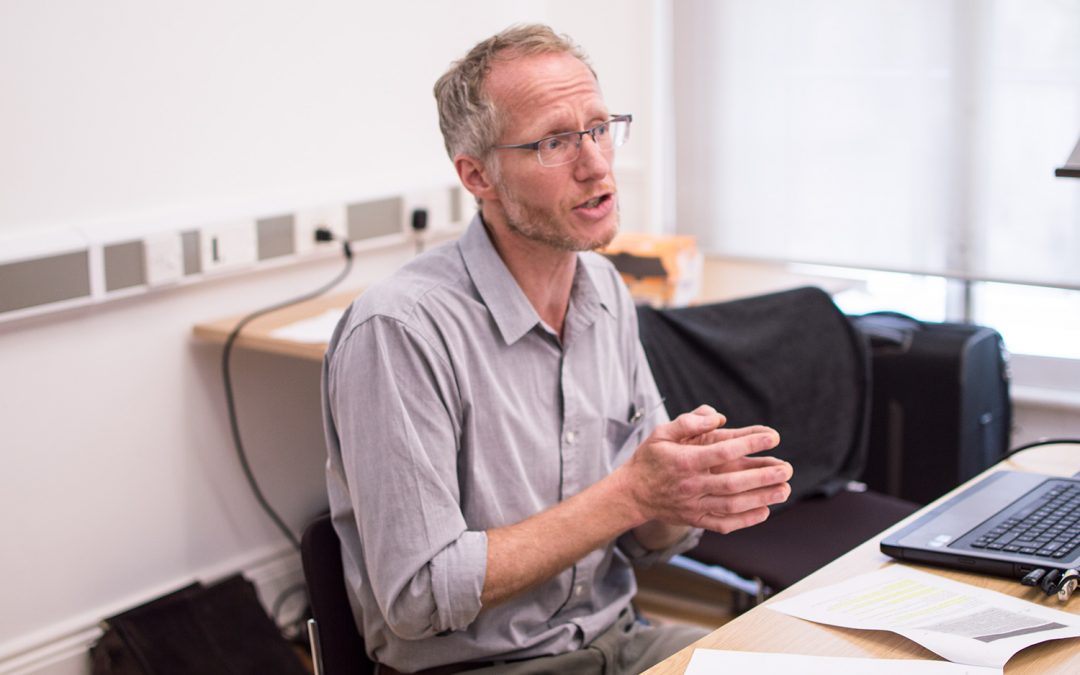 The composition of global inequality is changing. Between-country inequalities, although vast, are mostly falling, while the relative share of within-country inequalities within global inequalities is increasing – what David Hulme and I have recently synthesised as patterns of ‘converging divergence’. New geographies of development are emerging across economic, human and environmental aspects, challenging an assumed divide of a rich, developed North and a poor, developing South. Moreover, it is questionable how much of international development, or its study, would fit with an association of development aid from the Global North to “the poor” in the Global South, driven by a moral geography of charity. While David and I, following others such as Charles Gore, have suggested we may be moving towards an era of global development, we have few elaborations yet as to what that would involve.

Uma Kothari, David Hulme and I recently hosted a small group of leading (mostly UK-based) development researchers to discuss and debate ‘global development’, attempting to understand and explore what it is and its implications. As highlighted below, a lot of questions were raised, with productive scepticism as well as excitement as part of an emerging and intriguing debate as to what global development may involve.

The great development repositioning: beyond North-South? 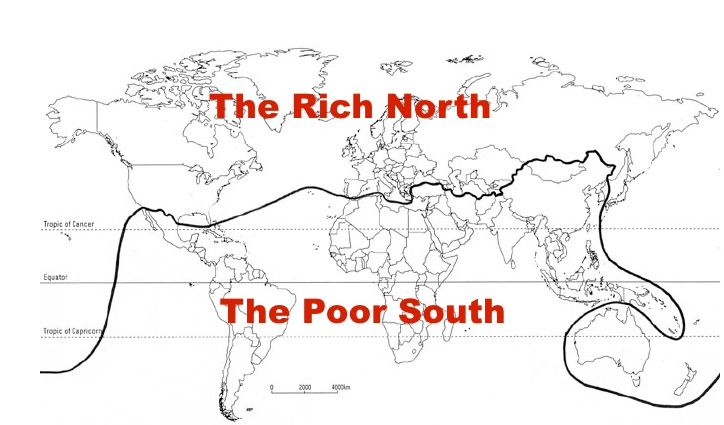 Many development actors, who have an identity framed in relation to the North-South divide, are having to reposition themselves. The aid dependence of many countries has declined significantly, with greater national potential for redistribution, as Andy Sumner highlighted. Moreover, the World Bank is no longer the only major provider of development finance, leading Ravi Kanbur to ask “What is the World Bank good for?” He has suggested the answer is to focus on global public goods. Many international NGOs from the North, whose identities are based on working in the Global South, have also faced a challenge of repositioning themselves, as David Lewis noted. Organisations such as Oxfam and Save the Children have attempted to increase their work on domestic inequalities within the North, although its unclear how successful they’ve been in that regard or whether international NGOs more broadly are continuing to move in that direction. David Hulme and Eleni Sifaki, based on some preliminary analysis of UK political party manifestos from the 1997 to 2017 general elections in the UK, find some move beyond ‘traditional’ development aid and free trade toward a more multi-dimensional understanding of global development based on addressing global inequalities and promoting social justice.

As educators and researchers of development, we also face such challenges in relation to our teaching and research on this changing world. Teaching and research on the third sector, for example, has often embodied a distinction between the international and domestic context – which David Lewis has argued should be overcome given the potential for useful comparative lessons to be generated across both. In the Global North, the teaching of development studies almost always has a predominant focus on the Global South, raising questions for whether development studies should be more global in scope. Moreover, the production of academic research is often not very global in the sense that although empirics can be drawn from different parts of the world, what counts as ‘knowledge’ is often still produced in the West. [Note: we acknowledge that (due to small size and budget) this workshop was not ‘global’ in scope of where our participants live and spend most of their time, which is largely the Global North] Similarly, old challenges may remain, including data to meaningfully interpret our world, as Dan Brockington argued. Yet, is development studies, as David Hulme suggested in seeking to synthesise some of our discussions, moving towards a focus on “multi-scalar, multi-dimensional, post-binary social progress”, where addressing inequality is central?

So what is ‘global development’? 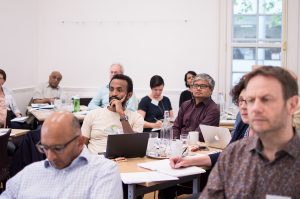 Attendees at the conference

Thinking about development as ‘global’ in scope is initially attractive for a number of reasons. Many ‘development’ challenges are faced in the Global North, including inequality, social exclusion and carbon emissions, which can be overlooked when development is considered just in relation to the Global South (such as with the MDGs). Excluded low-income groups in both North and South can face some real similarities of disadvantage, as Diana Mitlin noted from her experience working with Shack/Slum Dwellers International, and a global development approach offers potential to learn from such comparative experiences. The environmental aspect of sustainable development is clearly one where there is considerable ‘underdevelopment’ in relation to the Global North, which is arguably of urgent concern. Moreover, the North-South boundary is blurring considerably, as part of shifting geographies of wealth, income, poverty, and inequality across economic, human, and environmental indicators. Thinking about development in relation to the whole world may be more fitting to the shifting pattern of global inequalities, including the growing relative importance of within-country inequalities in much of both the Global North and South.

A growing theme throughout the workshop, however, was that global development is not necessarily progressive. North-South inequalities are still vast. Could the framing of development as a challenge in relation to the whole world lead to a dilution of attention to the biggest inequalities in the world – which are still mostly adversely experienced by people within the Global South? Could framing development as global in scope lead to an abdication of responsibility? Various actors could retreat inwards under the justification “we’re all developing now, so we have to look after ourselves”. Does talk of the global conceal inequalities and power relations? Rural India is clearly not the same as London. Uma Kothari argued that any shift from international to global is irrelevant unless perceptions shift regarding the inferiority of other people. Postcolonialism has always challenged international development as an imperialist project, pointing to the significant continuities from colonial times.

We can’t assume global development is necessarily progressive and must be wary of Eurocentrism in a universal guise and seek to create space for new forms of global solidarity to emerge. Moreover, thinking of development in relation to the whole world also raises the prospect of going beyond zero-sum assumptions about the relationships between national and global inequality, and exploring processes through which both can be addressed, as Dani Rodrik has recently explored.

‘Global development’ can also be framed as ‘scale’ and various discussions thus emerged over whether such an emphasis overlooks national and local development. We live in a world where, in spite of globalisation, ‘nation-states’ remain significant. Indeed, attempts at sustainable development on the ground require drawing on already existing geographical imaginaries and existing global, national, local processes, which have a rather sticky influence as Sarah Radcliffe noted. Debapriya Bhattacharya argued that the national scale of policy implementation and the challenge of policy coherence are crucial for SDG implementation. Charles Gore suggested that while sustainable development was originally a normative concept which was global in scope, it is largely now framed as a national challenge which should be pursued in all countries – as manifest in the SDGs.

Associating ‘global development’ with policy and actors at the global scale, however, can lead to perceptions of elitism, and of missing the boat in an era where the national continues to remain prominent. The vital role of actors and processes at various spatial scales – which include, but are not limited to – the global were repeatedly pointed to.

Cause for global development optimism?

Although global development may not be automatically progressive, rethinking the North-South framing of development in relation to the contemporary 21st century context is an intriguing prospect. This does not necessarily mean abandoning the North-South distinction. In case you hadn’t noticed from this blogpost, we talked about beyond North-South, but ended up mentioning the terms ‘North’ and ‘South’ as much, if not more, than at any other workshop! We also talked about “Norths” of the “South” and “Souths” of the “South”. Binaries are often inescapable, yet can sometimes serve to provide/illustrate productive tensions. Yet, it does involve clearly moving beyond a focus on ‘development’ as only a challenge for the Global South.

The issue of universal basic income (UBI) could be a fascinating lens through which to consider global development (as scope), as Sam Hickey highlighted. Across both Global North and South, similarities can be found with the ‘expulsion’ of growing numbers of people, adverse incorporation and a rise of the precariat. Yet while ideas associated with UBI are gathering increasing attention across different geographic contexts, it remains to be seen how much they will take hold and whether they will play out very differently in the North and the South.

A sense emerges that the world is changing, but how exactly and what this means, warrants continued attention. Indeed, Uma Kothari raised an intriguing point, that we may see as much need to rethink development – a term which retains a centripetal tendency despite the ambivalence, if not outright discomfort, of many in its orbit towards it – as to the ‘international’ or ‘global’ part. We may not have provided any singular perspective on or approach to global development, but a number of insightful contributions were made, which are likely to continue to be returned to as this debate unfolds. While productive scepticism surfaced, there was also considerable optimism about a shift towards global development that is more attuned to the shifting pattern of global inequality.

Clearly there’s plenty more to explore and we look forward to continuing this discussion. We are in the early stages of planning a larger conference on this theme in 2018. Look out for more details as they appear.