Have investment treaties protected inward investment in the wake of the global financial crisis?

The Monterrey consensus (2002) on financing for development recognised the importance of investment for global development; appreciating the unique resources channelled through direct investment rather than through aid alone. Through investments from foreign countries (often advanced economies), host countries (often developing economies) access necessary skills, technologies and markets in industrial economies.

For these reasons some countries have unilaterally relaxed their inward investment regimes while others have forged partnerships with other countries in bilateral or multilateral investment treaties. With such treaties host countries attract multinational corporations to bring investments, skills and technology, and conversely, to open foreign markets, achieved by enhancing terms for inward investments such as by adopting international arbitration for commercial dispute.

Have treaties forged after the Monterrey consensus been beneficial during the post-global financial crisis? To answer this question I assembled four sources of data: on inward investment from the International Monetary Fund database of Coordinated Direct Investment Survey (data.imf.org), on treaties from UNCTAD database of investment agreements (investmentpolicy.unctad.org), on technology or patents from the OECD patent statistics and on international trade partners from US International Trade Commission (usitc.gov/data/gravity). The period of treaties observation starts after the Monterrey conference and ends with the financial crisis: 2002 – 2008. The period of investment observation starts after the crisis and ends with the most recent data: 2009 – 2016.

To explain inward investment into host countries from foreign countries I use a workhorse model in international economics, the gravity model implemented in Poisson pseudo-maximum likelihood estimator, with country-year fixed effects to capture the effects of unilateral opening of investment. Following an emerging best practice four-year averages were used. The key predictor asks whether the home-foreign pair has an investment treaty in force in the previous period and does it matter?

Network of treaties and inward investment

Since the Monterrey consensus, investment treaties have proliferated into a network reaching around the globe (below). In the period up to the global financial crisis, UNCTAD recorded 644 new treaties were in force. Each country node is drawn with size proportionate to the number of bilateral treaties it has over the period. The network shows that some countries such as Lao (bottom left) actively concluded investment treaties during the period. 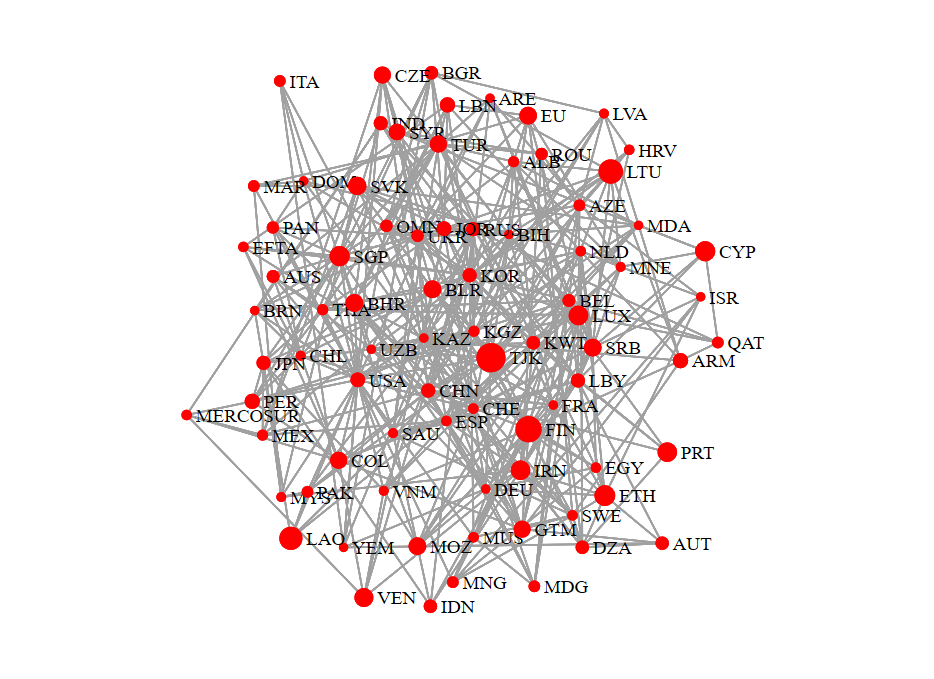 If the treaty is the key in explanation, inward investment is the result and its recent change is shown below. During the period the stock of inward investment grew from US$ 17.7 to 30.6 trillion, giving an annual compound growth rate of just above one percent. 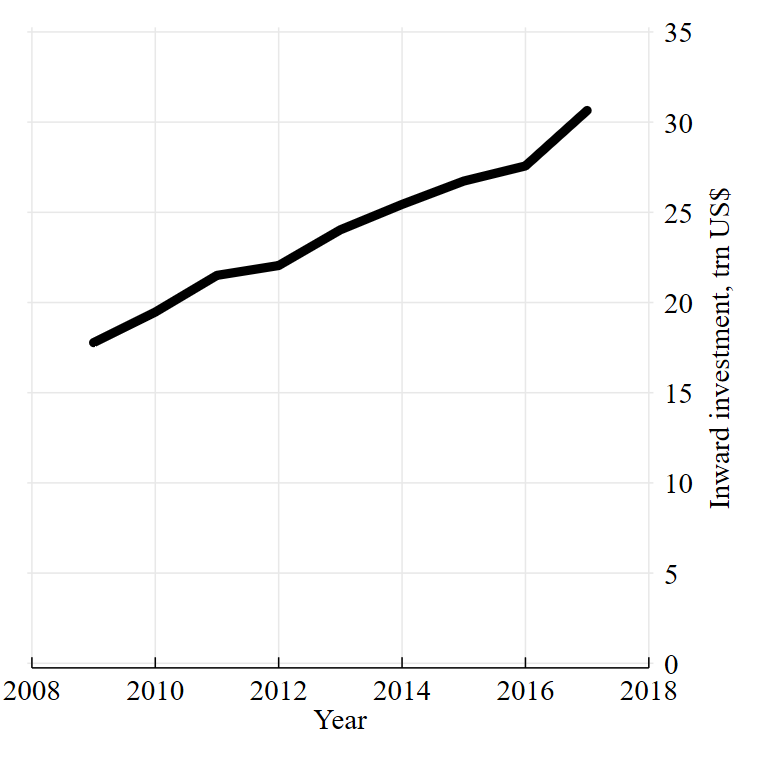 In contrast, an increase in the technology gap between foreign and host countries goes with a smaller amount of inward investment by 2 percent. The estimation has accounted for unilateral opening of investment by either party (country) and each party’s other characteristics through the inclusion of host country-year and foreign country-year fixed effects, as well as common explanations such as geographical distance, contiguity, common language, colonial relations, landlocked or not, island or not.

Photo by Andrew Stutesman on Unsplash