Measuring social injustice under climate shocks to persons with disability 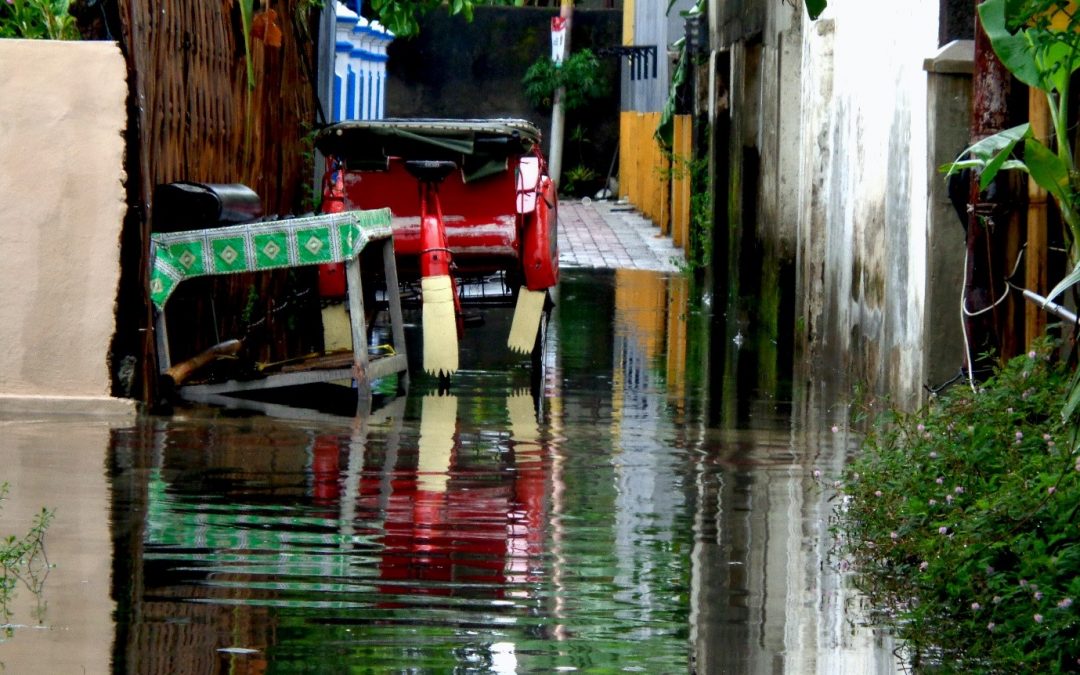 In his treatise on justice, The Idea of Justice (2009), Amartya Sen explains that from Hobbes through Kant to Rawls, the theory of justice is concerned principally with the task of elucidating the hypothetical social contract or ideal social arrangement under which people of diverse world views and persuasions can live together with justice. Separately, from Smith through Marx to Sen, diverse ideas abound, which share concerns with comparing how people live under different institutions and social determinants. Those ideas can then be harnessed to eliminate injustices and enhance justice.

While Rawls’ theory of justice famously leaves the discussion of disability to a later stage, the situation of persons with disabilities animates Sen’s ideas of justice, building on concepts of functionings and capabilities. The achievement of functionings such as being nourished, or being mobile or appearing in public without shame, should be the basis for comparison of how people live instead of simply relying on the accumulation of incomes or wealth. In his example, “a person with severe disability cannot be judged to be more advantaged merely because she has a larger income than her able-bodied neighbour.” Harnessed with the concepts of functionings, I shall use these ideas to measure social injustice under intensifying climate shocks to persons with disability in Indonesia.

A person with disability is subject to two handicaps in achieving comparable functionings: income handicap and conversion handicap. Persons with disability often gain employment with limited rewards or prospects, hence they face an income handicap. But even for the same command of income as a neighbour, someone with a disability may convert this to lower levels of functionings such as limited mobility because a wheelchair is needed or the roads are ill-designed for such device. This is common in developing countries. But even in Britain, as an empirical study cited by Sen shows, the conversion handicap is considerable.

Developing countries are also the site where climate shocks are expected to cause huge damages. This is despite their historically limited role (compared to the rich countries of today) in putting the planet on the groove of increasing and intensifying temperatures and rainfalls. The vulnerabilities of developing countries result from their less diversified economic structure, relying much more on climate or natural services to drive their agriculture and industries, and from their smaller reserve to invest in adaptation and mitigation whenever shocks hit. This comparative situation is a known issue of climate justice.

But climate shocks expose people with disability to an additional handicap. Analogous to the developing countries vis-à-vis the rich countries, they tend to have a limited role historically in consuming fossil fuel which bears a large responsibility for the planet’s predicament. And whenever shocks hit, they are ill-equipped to respond resulting in their functionings being severely reduced, unable to move or to shelter or to get drinking water. In sum, under climate change, people with disabilities face three handicaps: income, conversion and exposure. This exposure handicap is a less known issue of social justice.

How big is the exposure handicap faced by persons with disabilities to the hazards of climate shocks such as loss of drinking water specifically on account of such characteristics? Indonesia is fortuitously placed to answer this question. Not only because the country has seen devastating climate shocks in recent decades, for instance by El Niño-driven (weather system) which led to prolonged drought in 1997 but also because of the climate variations across the 1300-island archipelago.

I drew from national socio-economic survey 2018 information on 900 thousand adults 15 years and older living in 514 districts, which represent considerable climate variations. And from their answer to the question: “In the last year, has your household experienced loss of drinking water for at least 24 hours?” An affirmative response indicates a disruption to their functioning, specifically being ill-hydrated. It is known that human bodies can go without food longer than going without water; being ill-hydrated amounts to a severe shock to functionings.

Disability is ascertained using an international instrument designed by the World Health Organization and the World Bank among others, viz. the Washington Group short set questionnaire. The standard instrument allows the construction of disability status (with or without disability); see Disability Data Report 2021 (Mitra and Yap 2021). Personal and family attributes are also considered including incomes (personal consumption), age, sex, education, marital status and family demographics. I applied a random effect probit estimator to get the coefficient for exposure handicap for disability. (A sensitivity analysis confirms the following results, specifically fixed effects probit model with a solution to incidental parameters problem.)

Among adults aged 15 and older, the share of persons with disabilities is 3 per cent. With age, this share increases steeply as shown in the bars below. While in young adults disability is rare, one in thirteen 60-year-olds has disabilities and about one in four septuagenarians reports some disabilities. 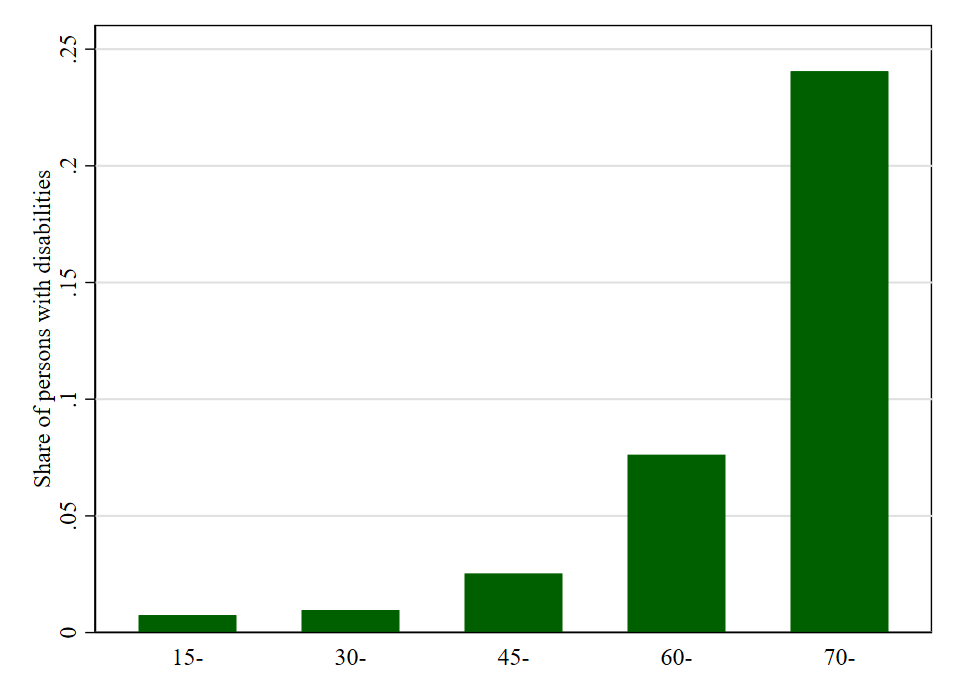 Figure 1. Shares of persons with disabilities across age groups

The models then fit several factors together with disability and age in an attempt to explain the probability of experiencing loss of drinking water for a whole day, focusing on those with disabilities. Coefficient plot (Figure 2) shows that persons with disability are at higher risks of being ill-hydrated for 24 hours in the last year (top line), while urban residents are at lower risks of the same experience (bottom line), all else equal. Consumption, indicating economic levels (middle line), behaves as expected: higher economic levels reduce the probabilities of experiencing being ill-hydrated. These coefficients are all highly significant.

The conversion handicap in Britain as related by Sen is considerable. How is the third handicap namely the exposure handicap in Indonesia? Together coefficients give an indication that it is considerable. In absolute value nearly mirroring the strength of residing in cities rather than in villages (top and bottom lines). 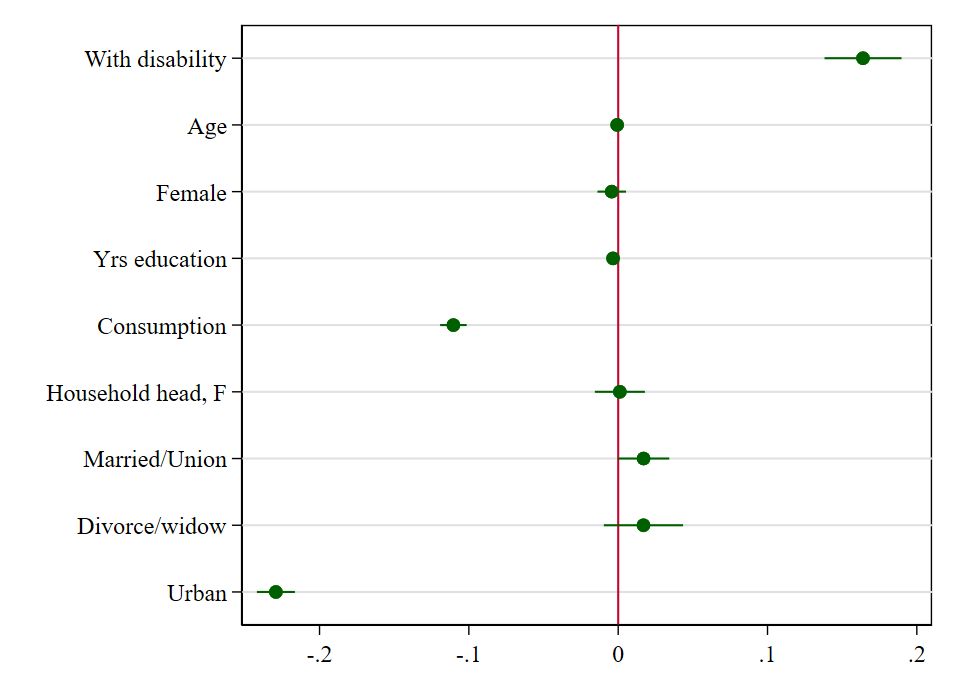 The net exposure handicap in Indonesia is given by the marginal probabilities of being deprived of drinking water for a whole day among those with a disability; this is shown for middle-aged and older people in figure 3. Given the bars in the first figure where the shares of these age groups are considerable (one in thirteen and one in four), the resulting number of people burdened with the exposure handicap is considerable. The plot shows that middle-aged persons with disability are at higher risk of climate shocks. 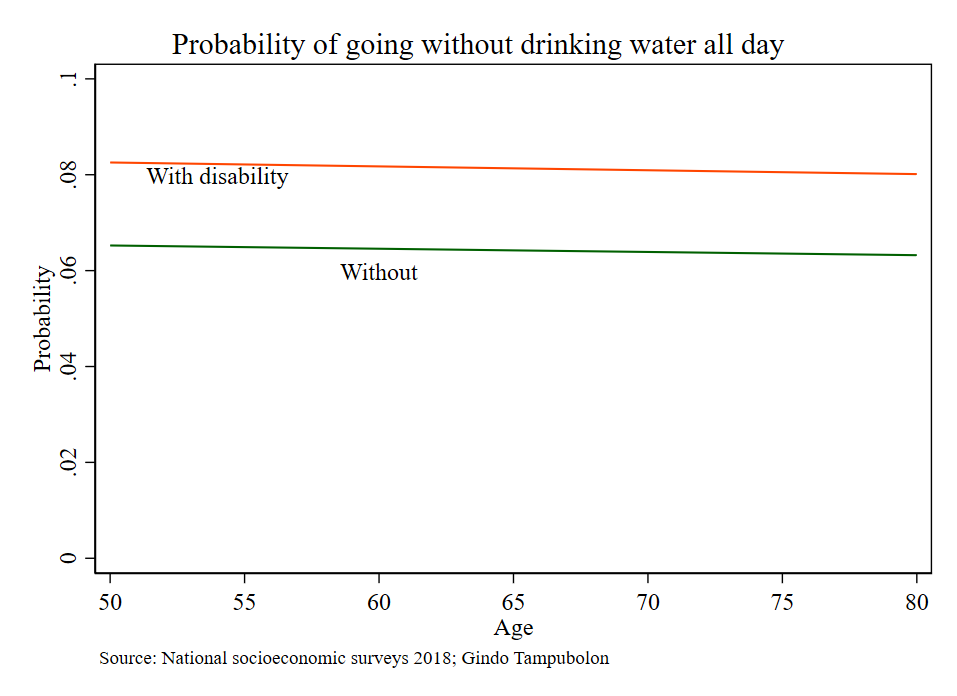 Figure 3. Marginal probabilities of being completely without drinking water for 24 hours last year across ages (Socio-economic survey of 904 thousand adults aged 15 and older in 2018). 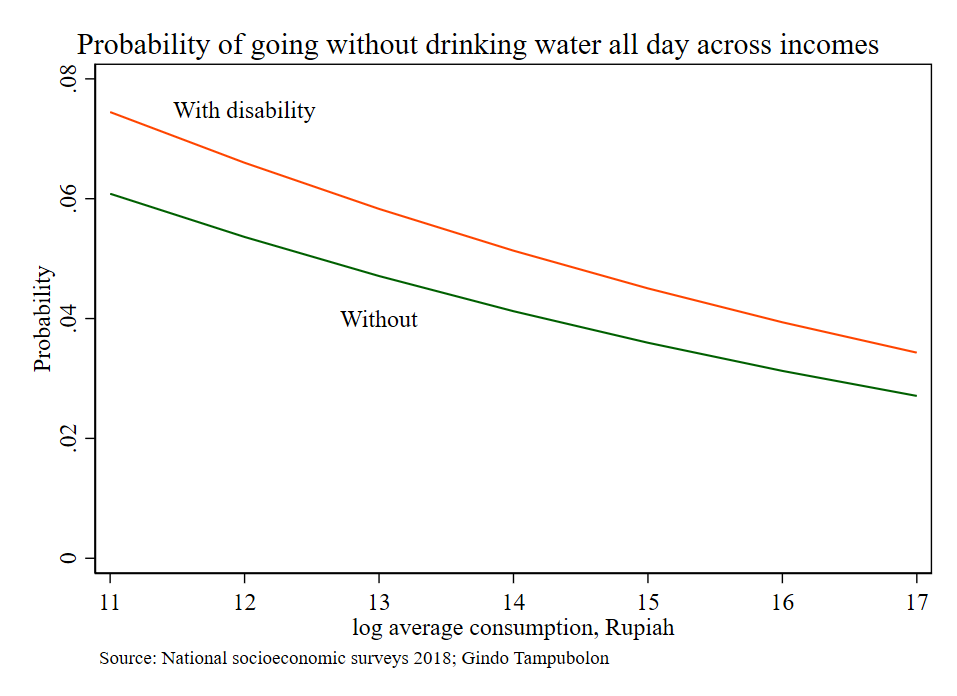 Figure 4. Marginal probabilities of being completely without drinking water for 24 hours last year across consumption levels (Socio-economic survey of 904 thousand adults aged 15 and older in 2018).

Inquiring about enhancing social justice, under the ubiquitous threat of climate change particularly to people with disabilities, requires a new concept amenable to estimation. For this, I have proposed exposure handicap, additional to Sen’s conversion handicap and proceeded to estimate its magnitude in Indonesia today. The country is no stranger to climate shocks, and by the speed that the world is tackling climate change now, Indonesians are sure to be visited by more climate shocks in future, with or without disability.

The data showed that disability by international standard (the Washington Group questionnaire) is quite common in middle-aged and older Indonesians. They are also significantly more vulnerable to losing functionings under the threat of climate change to their drinking water entitlement. In fact, the net effect of being with a disability is an increase between one to two percentage points of the risk of going completely without drinking water for 24 hours.

Unlike Kant and Rawls who are principally preoccupied with devising social contracts that ideally deliver justice as fairness, Smith and Sen are principally exercised by the need to remove injustices. This work has identified an injustice that needs removing: people with disabilities played a minor role in revving climate change and yet they carry an additional exposure handicap of losing their functionings in the events of climate shocks. The idea of justice demands the removal of this exposure handicap.