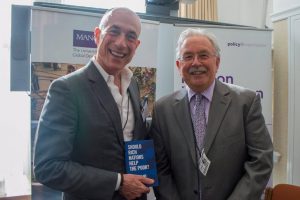 Giving a gathering of over 20 development professionals, journalists, alumni and MPs a reminder that 1.2 billion people went to bed in extreme poverty last night, Mike Kane MP opened up Professor David Hulme’s book launch at Westminster for a frank but positive discussion on how and why rich nations should help the poor.

Introducing the Global Development Institute (GDI) and its Rory and Elizabeth Brooks Doctoral College as a world leading research institution, the MP handed over to Professor Hulme who talked about his new book – Should Rich Nations Help the Poor? – within the context of Brexit and the decisions that need to be reached which will influence UK international development policies.

“It is a moral responsibility for rich nations to help the poor and, additionally, it is in their self-interest. If we are thinking of our own future, and our children and grandchildren, then we need a prosperous and stable world,” said Professor Hulme.

Addressing the issue of how we can help, Professor Hulme talked about how the traditional answer of foreign aid is not enough. We are now in a “post-aid world” where aid is still important, but makes up a smaller part of the answer. Instead, he argued for the need to reform international trade policies, so poor people and poor countries get a greater share of the benefits derived from trade; stopping illicit financial flows that siphon off income and assets from poor countries to rich countries by corporations and national elites; and, rapid action to reduce greenhouse emissions from rich countries and the provision of adaptation finance and technology to poor countries. 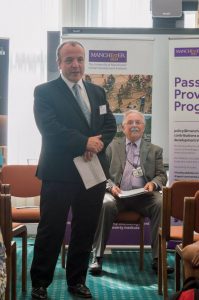 Another topic covered was the rise in inequality in many countries. This slows down poverty reduction and social progress and increasingly threatens to give political control to ‘the 1%’ who benefit excessively from economic growth and wealth creation. In many rich countries people have a diminishing belief that the lives of their children would be better than their own – this is a sentiment which has been fanned by populist leaders to blame ‘migration’ for problems that are actually caused by inequality.  Global inequalities will have to be tackled if the UN’s Sustainable Development Goals (SDGs) are to be achieved by 2030.

“If you are worried about economic migrants from Africa then you have to address inequality. If you consider the pay and opportunities of people living in Africa, then why would they stay in poverty and not move for a better life?  We need to worry about job creation and pay in Africa.”

You can buy a copy of Professor David Hulme’s Should Rich Nations Help the Poor? now.

See live tweets from the event below
#ShouldRichNations Tweets