Seeing from the South: an international exchange with South African shelter activists

“We are poor, but we are not hopeless. We know what we are doing”.

This is Alinah Mofokeng, one of three activists from the South African alliance of community organizations and support NGOs affiliated to Shack / Slum Dwellers International (SDI) who came to visit Manchester last month. The three came to explain their approaches and to exchange knowledge with local organisations through a combination of visits around Manchester and Salford, and a half-day workshop drawing together activists from around the country. 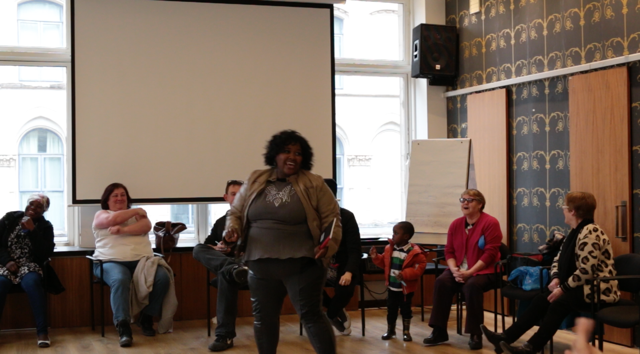 While South Africa and the UK might initially appear to be worlds apart, previous discussions between low-income communities in the global North and South had identified commonalities in their disadvantage. Potentially there are approaches that can be drawn upon and adapted in order to resist marginalisation and improve local communities, which can work across different places and contexts. This was the basis for Sophie King (UPRISE Research Fellow) and Professor Diana Mitlin (Global Development Institute, University of Manchester) inviting the South African Alliance to meet with UK community groups in March, drawing on a long history of community exchanges. This coincided with the Alliance participating in the Global Development Institute’s teaching programme with community leaders lecturing on their experiences and methods.

Alinah Mofokeng (Federation of the Urban and Rural Poor), Nkokheli Ncambele (Informal Settlements Network) and Charlton Ziervogel (CORC) all talked about their experiences of being part of the South African Alliance of SDI. This alliance has pioneered people-centered development initiatives by and of people in poverty since 1991. Their foundations are established in the grassroots, working on issues that emerge from the daily experiences of poverty, landlessness, and homelessness to bring immediate improvements and long-term inclusive citizenship within cities.

SDI’s approach to organizing is grounded in women’s led savings schemes, in which each member saves small amounts and does so with the support of their own collective savings group, so they are able to improve their own lives, and that of the wider community also. Solidarity is central to their approach and savings schemes are encouraged to federate to have stronger influence on city and state government. In the process of coming together they learn about their respective needs and challenges and respond collectively. If one member’s family does not have enough to eat, the group may decide that week’s savings will be spent on putting bread on their table. Once one savings scheme is formed, they share their learning with other marginalised people around them and support others to form schemes of their own that can join the network. 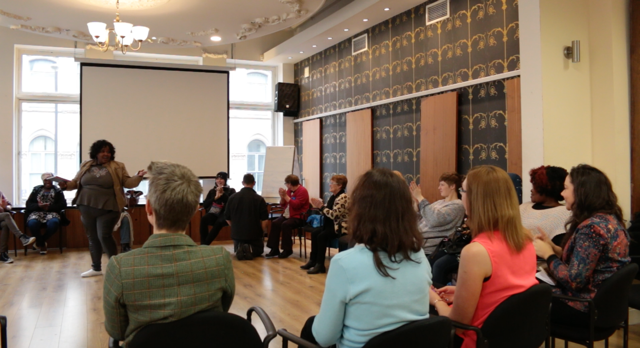 This extends beyond initial collectives to direct community-to-community learning exchange at city, national, and international levels. From here, they are able to show that they are together and are capable, which means they can influence the government from a more powerful basis – as Nkokheli said, they have been able to say to the politicians: “you are eating our money and not doing what we want. We say, enough is enough!” Nkokheli said that once the community shows that they are capable, for example through building their own toilets in the informal settlements and developing savings, politicians are more likely to listen.

The exchange of different ways of doing things between the South African Alliance and UK organisations certainly had an impact – showing us that the exchange of ideas about solidarity, a self-reliant ethos, and having a long-term vision for more inclusive cities is powerful enough to make sense across continents. One of the participants in the meeting was Ann from a group called Five Mummies Make, which is a self-help group in Scotland who have come together to sell handmade crafts, put on events and contribute to local charities; through meeting every week, the women have improved their own well-being in the process.

After the workshop, Ann was inspired to make a bigger difference than they were already achieving, saying that:

“If we bring together a bigger group, a federation, we can make such a bigger difference within the community, so not just small differences for individuals…I want to go back now and make the changes in the community, without having to go cap in hand asking for help constantly, but saying – this is what we want…”

Alinah, Nkokheli, and Charlton visited the United Estates of Wythenshawe for an extended lunch to meet people involved in Mums’ Mart. Mums’ Mart was started by a group of parents who came together after speaking to each other in the playground at their children’s school in Wythenshawe. Through chatting, they realised that they shared experiences of feeling isolated, and that their kids weren’t getting to take part in everyday activities. To address these problems the mums now meet every other week to have a meal while their children play, and they organise ‘market days’ to bring people from the estate together and raise money to take their families away somewhere fun for a day or a week.

After the exchange, members of Mum’s Mart have begun to emulate the SDI savings model and are holding weekly savings meetings, alongside their income-generating activities and monthly committee meetings to review progress; they also have ambitions about how over the long-term they can bring practical social change beyond their immediate group.  Sharon Davies, the group’s treasurer, told us that since the visit Mums’ Mart have set up their own savings scheme and it is going well, and that they “have loads of really good ideas as to where we are going to go with Mums’ Mart from now on”. 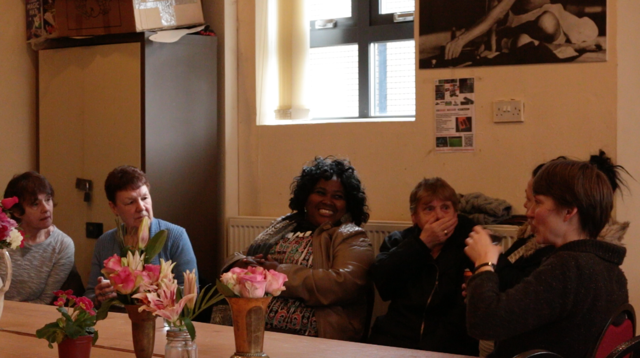 This was certainly not just a one-way street of learning from the SDI approach. Nkokheli, who was initially surprised that poverty existed in the UK after visiting a homeless group in Manchester, told us that: “The exchanges are very important to us, because it mobilises the community…and also [helps] to train communities to do things, [to see] what other people are doing for themselves. Here in Manchester, I learnt a lot…The systems are not the same, but the look of things are the same – there are things we can learn from Manchester, and there are things Manchester can learn from us”.

Through this exchange then, there have been concrete changes that have already taken place. It also shows the value of bringing together groups who might be marginalised from politics and from economic opportunities, to share ideas, tactics and strategies. There is most certainly scope in the UK to build on the approach that SDI take: developing a more self-reliant social action approach; coming together, initially in close supportive relationships between neighbours, but with a view to wider solidarity across groups and between areas; and showing the government through practical activities the capabilities of people living in low-income areas and the direction that poverty reduction strategies should take.

As Alinah said, “we are not hopeless. We know what we are doing”.