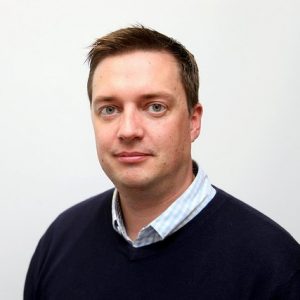 Dr Tomas Frederiksen is a Lecturer in International Development at GDI and also one of our alumni. He is co-investigator on the ESID natural resources project, focusing on particular on the interactions between political settlements and corporate social responsibility at multiple scales in Ghana, Peru and Zambia.

What made you want to work in development originally?

I decided very early on that I was a global citizen, interested in problems globally, and very aware that I had certain life chances just by dint of where I was born. I didn’t think that was right, and I wanted to travel. So I did a degree based around looking at those problems, and went on from there.

I did my undergraduate degree in Development and Geography at Sussex University. I then worked in development in Denmark for a year and southeast Europe for four years, involved in youth policy and youth organisations. You can only get so far in an organisation without a postgraduate degree, so I came to The University of Manchester to do a Master’s in Poverty, Conflict and Reconstruction, followed by a PhD in Geography, and then did a postdoc at the University of Toronto for a year.

What is your research focus?

It’s all been about mining. My PhD was about the history of mining and how it changed. Doing research in the Zambian Copperbelt, I found that lots of companies were spending money they didn’t legally have to, to improve their social and environmental impacts. So I went to Toronto, a global centre for mining finance with a big stock exchange, to look at international standards. I continued that research back in Manchester, where I had a two-year lectureship. I then got a British Academy research postdoc, looking at what difference these international standards in mining make, before joining GDI as a Lecturer.

Why do you think it is an important research topic?

The private sector is being asked to play a greater role in development – and in society in general. It has been a trend for the last 20-odd years, the view that states are limited in all sorts of ways, and that we should have other actors doing things that states normally do. With the private sector so important, there’s a real interest in where social and economic goals can align, where private actors can also help wider society – they talk about a win-win situation, creating shared value. I’m interested in the questions of: under what conditions do companies choose to be more socially oriented and improve their development impact? And, when they do choose to do that, does it actually improve things? There’s a lot of research on why companies should be nicer, but there’s not been much research on whether this makes things better. That’s what I’m interested in.

What incentivises people to have that social awareness when the bottom line is profit?

As one senior executive put it, nobody wants to be the guy who polluted the river. There’s a danger in thinking about mining companies as a unitary whole. There is an enormous diversity of and within companies. Many [employees] will see their decent wage in contrast to the poverty around them and they will want to respond to that. It’s quite human. Then there are directives coming down from the top, that we’ve got to follow various standards, and investors want us to be doing various things. There are quite different motivations at different levels.

Any projects you are particularly proud of?

I have high hopes for my [forthcoming] book, that it will speak about things that aren’t being spoken about much. I am really pleased that I am speaking to mining companies and trying to engage with them. I think it’s important that people in the critical social sciences do talk to the private sector. I’ve been able to do that to an extent. It’s been really interesting and productive for me, and I hope in the future for mining companies too. Many people in the mining industry want to do it better. There are also many who just want to make lots of money and be technically efficient. But the progressive elements are struggling with how to do right, in a way that is both profitable and helps locals. These are the people I am talking to.

Which of your findings are most relevant to policymaking?

Policymaking by whom? For corporate policy there are very clear findings around being aware of what the consequences are of treating corporate social responsibility (CSR) as risk management. If you do this, you end up suppressing opportunities for development. If you think that development is about social change, and you come in with a CSR strategy that is about preserving the status quo, what ends up happening is they buy off elites to try to keep people calm, so that they don’t kick off and disrupt operations. It can end up being quite regressive.

For government – for countries with many mining companies operating overseas, like Canada, the US, the UK, Australia – I do think there should be regulations that stop these companies completely trouncing human rights when they are abroad. There are complications, issues about extraterritoriality – can courts here decide about matters that happen under other legal jurisdictions? Increasingly we are seeing prosecutions of companies based in London and Ontario for things that happen in their operations overseas. I think some kind of direct legislation around that would be a sensible thing – that sets limits, but also sets clearer accountabilities.

How does your work address global inequalities?

One of the ways that inequality is frequently discussed is how poorer countries should strive for more economic growth and one way they can get that growth is by selling their natural resources. But if that is done in certain ways, the effect on inequality will be negligible or even negative. My PhD research was on the origins of inequality in Zambia. As the mining industry was set up, they created a series of institutions that got money and copper out of the country very quickly and efficiently, and left all the bad stuff. You see those similar institutions around the world today, very much geared towards servicing global markets and not very well geared towards protecting local citizens and ensuring maximum local benefit is accrued. One of the ways mining companies can help locals and help reduce inequalities in the countries in which they are operating is by supporting local forms of development. I am interested in the ways in which they either do or don’t, or whether the system means they can’t possibly ever do so.

What is your favourite thing about GDI?

GDI has 45 full time academics looking at the development in one Institute together, supporting 90 PhD researchers and as well as a Master’s programme of more than 400 students – that’s enormous! It’s rare to see research into development at this scale. Our academics are doing high quality research and they’re actually all really collegial people as well, making GDI an intellectually stimulating and nice place to be.

Who would you say is your politics of development hero?

I come from a literature called political ecology, the politics of environmental change, and the founding fathers of that have done some amazing stuff. Tania Murray Li’s 2007 book, The Will to Improve, was really influential. She made the case that people trying to make things better can actually make things a lot worse. That really helped me develop some of my thinking. And James C. Scott has written some books around development, such as Seeing Like a State, which made a very similar point. Tania Li is good at bringing together Marx, Foucault and Gramsci. She’s a very flexible thinker. There’s a bit of conservatism on the Left of development. A lot of people don’t want these amazing, interesting, traditional societies to become consumerist Western-oriented ones, but if you ask the people in these societies, they often want electricity and jeans and to dress like the guy in the MTV music video. Li recognises this. A lot on the critical Left don’t.