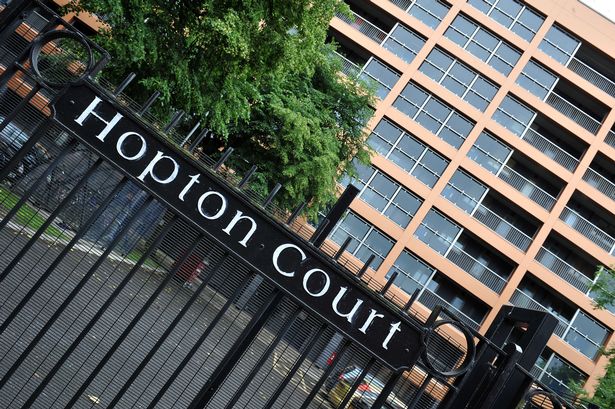 “I am most proud of being part of Community Savers because I know I am in a movement based on social justice. It’s also the place I’ve been challenged the most but also learned the most.”

This is the story of how a women-led social movement methodology from the Global South, has enabled older tower-block tenants in inner-city Manchester to address health and social inequalities experienced by elderly people living in the heart of the city.

Activists affiliated to Shack/Slum Dwellers International (SDI) have been visiting Manchester to teach at the Global Development Institute on an annual basis since 2011. As a movement that has proliferated across cities of the Global South through community-to-community learning exchange, they soon requested to meet with community organisations and projects during their visits. SDI affiliates always seek out opportunities to learn from other communities about their experiences and strategies for addressing situations of disadvantage.

In March 2016, these exchanges catalysed something exciting and transformative: the first SDI-style savings group was established in Manchester organised by Mums Mart community association in Wythenshawe. Once the torch was lit, the fire spread quickly. Partnership between the Global Development Institute, University of Manchester and the Realising Just Cities programme and University of Sheffield enabled a series of international visits from community leaders in Greater Manchester to first the South African, and then the Kenyan SDI affiliate, to take place.

Six years later, and despite the hurdles presented by the COVID-19 pandemic, there is now a network of five neighbourhood-based savings initiatives spanning Manchester, Stockport and Sheffield. Community Savers is supported by Community Led Action and Savings Support, which helps to facilitate the savers network, establish new groups and continues to support leaders to exchange with their Kenyan mentor federation Muungano Wa Wanavijiji.

Community Savers groups have made amazing progress supporting their communities through the pandemic, developing poverty reduction projects and innovations, and increasingly developing new visions and partnerships for their neighbourhoods which can address the long-term disadvantage experienced in some of the lowest-income neighbourhoods in Greater Manchester and Sheffield.

One of the most exciting new partnerships to emerge from their efforts is the Ageing Well in Place in Hulme initiative which brings together tenants, their housing provider, the Manchester Local Care Organisation, local voluntary and community sector organisations and two universities to co-produce solutions for elderly and vulnerable tower block tenants living in the Aquarius estate, in inner-city Manchester. The impact has been so profound that one of the leading tenants’ group, Aquarius Community Savers, have recently been nominated for a University of Manchester Making a Difference Award. 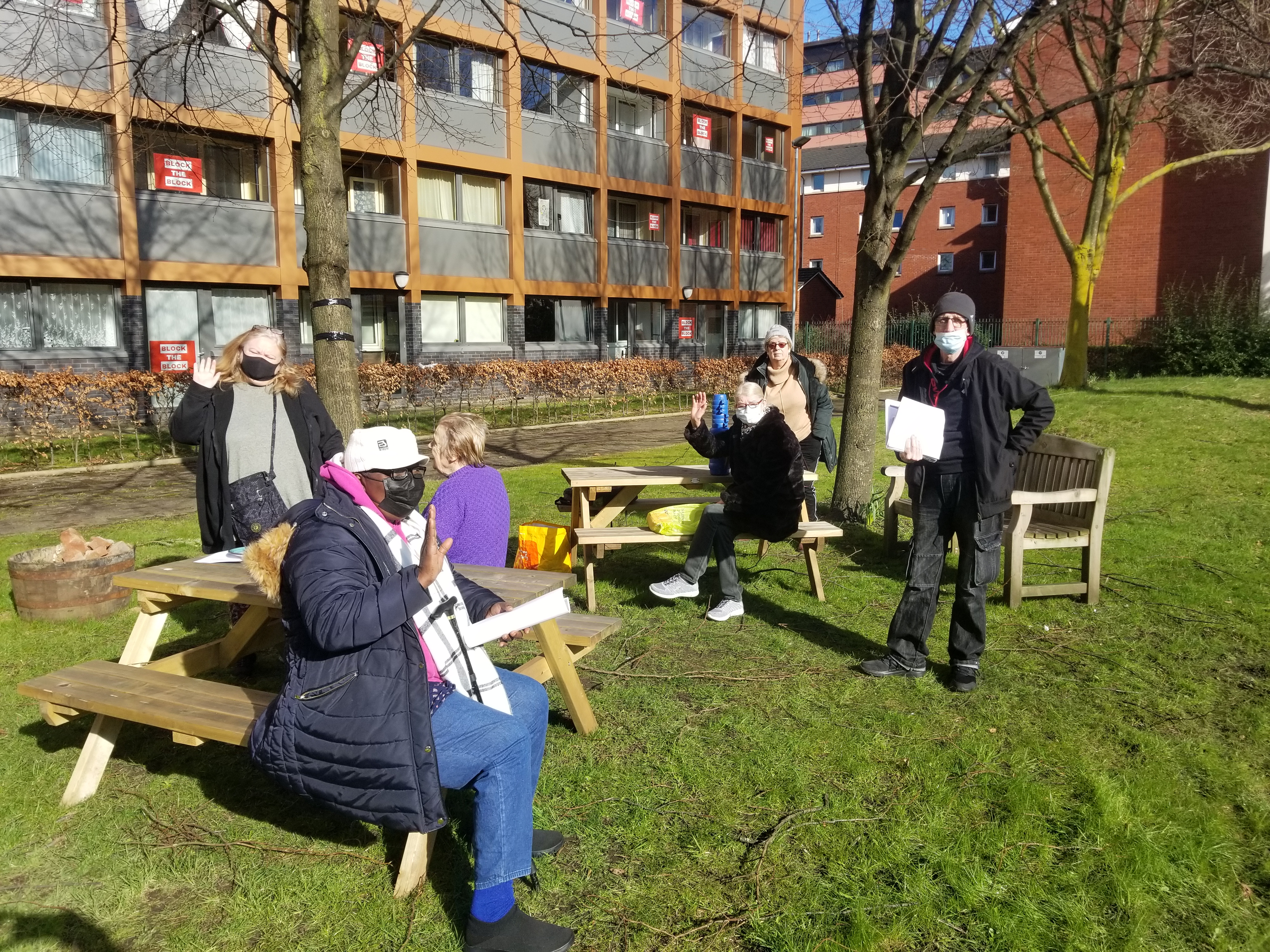 Here, Tina Cribbin, long-term Hulme activist and member of Aquarius Community Savers shares her experiences of adapting the idea of enumeration and profiling from the SDI toolkit for her group’s own local purposes…

When I first came into contact with Community Savers, I had been active in the community for thirty years from being employed as a youth worker, social worker, women’s support officer and many more that were unpaid.

These creative activities have been focused on speaking truth to power about the negative impact of university and inner-city expansion and gentrification on my community.

You can imagine what my thoughts were when I was approached by Sophie King (Director of CLASS), who was at the time a university academic, to participate in a gathering called “inner-city exchange”. Universities held lots of negative connotations in Hulme as they have basically taken up the land where we used to have social housing and community facilities. I had zero interest in working with another academic. So much so, that I even wrote her a poem about why.

Sophie recognised my sceptism about academics and asked Sharon Davis from Mums Mart to come and talk to me about Community Savers. I now know that this is how Community Savers operates – community to community, woman to woman. Sharon spoke my language and I felt safe that I wasn’t dishonouring my community by participating.

I was able to totally grasp what the community savings were about and the history of how it grew out of exchanges with Shack/Slum Dwellers International federations as Sharon had already been to learn from community activists in South Africa and Kenya.  It made sense – it was much more than a savings group it’s a social movement that is run by women not so different from me. I, like every woman on the planet, know that the personal is the political. Every penny saved is an act of resistance and challenge to those who control our lives worldwide.

It was impossible not to want to be a part of something so amazing!

I was so impressed when I met Anastacia Wairimu who is a lifelong leader of the movement in Kenya and who came to visit us in Hulme in 2019. It made realise just how big the movement is. And how organised they were in their communities. Anastacia showed me clear examples of how the movement worked with women finally getting their own homes constructed, getting roads built, getting electricity and water. It inspired us when she talked about collecting information as evidence to bring to the authorities. Although we lived worlds apart, we were together in being resistant to inequality and understanding that working together as women, we can bring change. 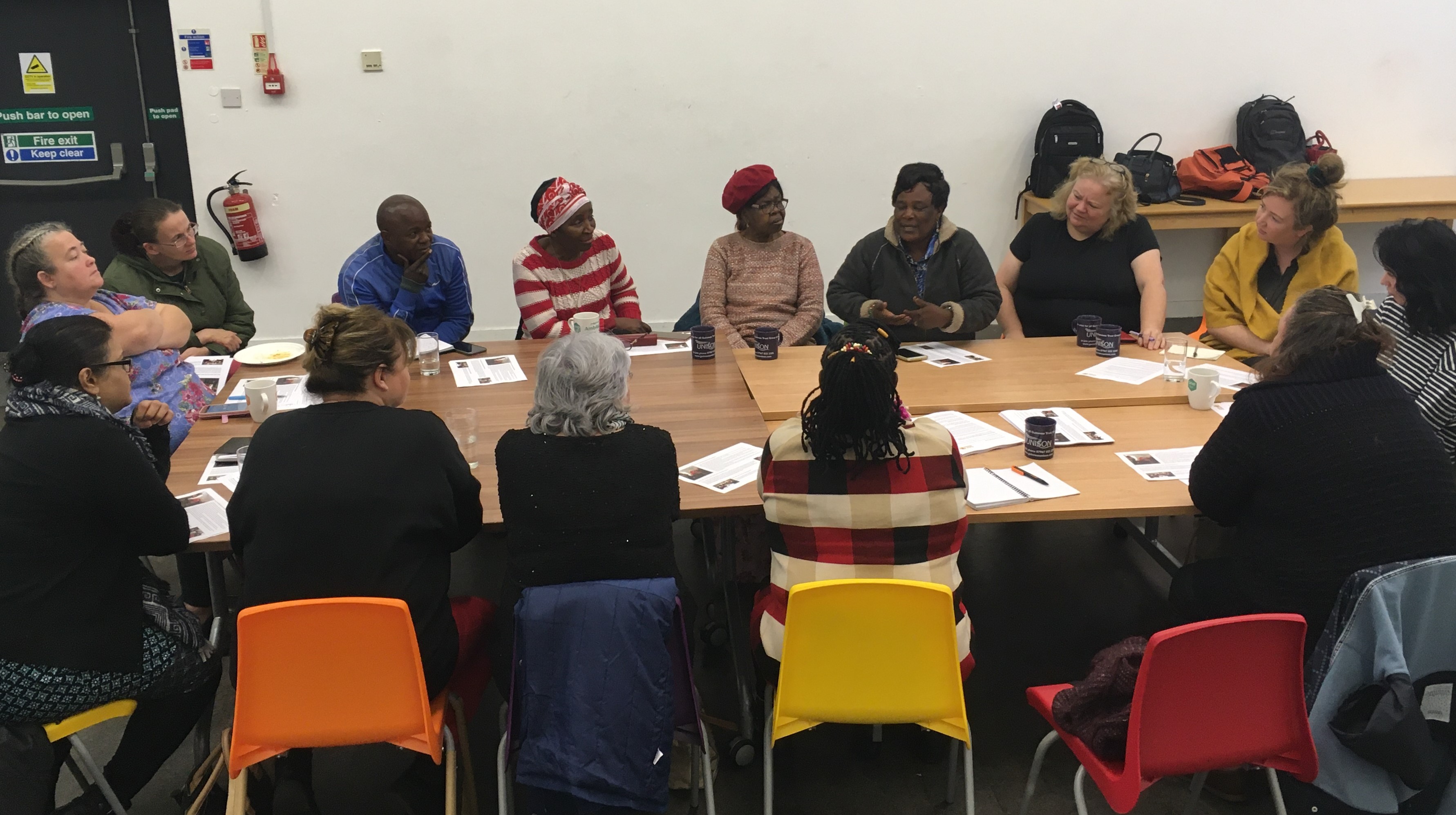 Anastacia Wairimu’s visit to Hulme in 2019

Inspired from Anastascia’s visit, and together with On Top of the World Project where we run a weekly drop in with older tenants, we began to think about the issues facing our community and particularly tenants at Hopton Court where I live, and where 75% of tenants are aged 50 and over. We knew that many of these tenants were in vulnerable or difficult circumstances and often had poor health but were not receiving the care they needed. We were aware that some people were hiding their frailty for fear of being moved away from the place they call home. There was a lot of isolation and nowhere for us to come together during the pandemic.

CLASS supported us to develop a partnership with two academics at the University of Manchester (MICRA) and MMU (MSA), and our housing provider One Manchester. We did some interviews with tenants and other people like local GPs which enabled us to get an overview of some of the challenges tenants were facing. However, this only captured the experiences of a handful of tenants.

With support from a PhD researcher at the University of Manchester, Whitney Banyai-Becker, we were able to get some social responsibility funding to take forward a tenant-led survey of our whole block.

This was different to other research projects I’ve been involved in because the actual questions were designed by the tenants themselves. We felt ownership of the project. We worked with Whitney and Sophie to co-design the whole thing. We were able to share our expertise about how to approach our neighbours and what would be needed to encourage their participation, also about safety and protecting people’s privacy and confidentiality – we know our own community well and we knew what people’s concerns would be ahead of time. Whitney and Sophie could share more of the academic side and make things systematic, ensuring information was recorded systematically and that surveys were written up and analysed, which meant they could do the report writing at the other end of the process.

We began by talking with residents about what changes they would like to see at the block, but the questionnaire covered wider areas such as access to services, social isolation, health and wellbeing and feelings of connectedness. We were a bit pessimistic when starting because many people didn’t answer their doors. But we kept going at different times and once people got the idea that it was their neighbours trying to make improvements, they were willing to engage with us. We got over 50% response rate which far exceeded our expectations.

Although Sophie and Whitney were there for support, it was tenant-led which gave us the drive and motivation to do right by our neighbours. Furthermore, it gave me and other residents something we had not had before – hope. I felt Anastacia and all the African sisters with me. Whilst I was walking at night in the rain, I realised they were probably doing the same. It gave me strength (you can read the poem I wrote about this here).

Since doing the survey, life has completely changed at Hopton Court.

We’ve formed a steering group to establish something called a ‘Naturally Occurring Retirement Community’ or ‘NORC’ at our block and for the benefit of tenants in neighbouring blocks. We’re working closely with One Manchester who have employed a full-time Independent Living Advisor with support from Manchester Local Care Organisation. Now there’s someone ensuring that older tenants are getting access to the support and services that they need to ‘age well in place’.

A new community hut is going to be constructed in our shared garden area, so that we’ll always have somewhere to socialise together and access information and support – even in the winter months when it is too cold to sit outside together. This is a participatory design project through which One Manchester will work with tenants to create a new age-friendly facility for our estate. A lot of assets like this have been lost to regeneration and university expansion, so it will be good to bring something new which will be really valued by older people locally.

One Manchester are also about to employ a ‘NORC’ Development Worker to really get our retirement community idea underway. They’ll be working in partnership with our growing group of older tenants called Aquarius Community Savers and with On Top of the World and other age-friendly groups and projects in Hulme to address the challenges older people face in our community.

We’ve been working on this initiative for over two years now. Learning, planning, designing, learning to trust the process and learning to trust ourselves, realising that we’re able and should be part of those meetings.

The path to change does not run smooth

I think what has changed is that it’s been at times an uncomfortable cultural shift for people at One Manchester, learning to trust us and work with us tenants as equal partners.

And certainly, from the residents’ side, we have learned to trust, respect and work with them in a way that just wasn’t there before. Trust is fragile and will always need work to maintain it.

What I think every person needs to learn is how power structures work. Now when I’m working in the community, if something is not as it should be, I won’t hesitate to take it higher – you have to work around those who may not understand what you are trying to achieve or have the power to work with you to achieve it. You can’t work upwards through straight lines and sometimes you need to go backwards or press pause before you can go forwards again. I can definitely tell you it works.

I am proud of my community for being part of these changes.

I am most proud of being part of Community Savers because I know I am in a movement based on social justice. It’s also the place I’ve been challenged the most, but also learned the most. I’ve learned to work smarter, not harder.

In November, I will be visiting Anastascia and other Muungano Wa Wanavijiji members in Nairobi together with some of the other Community Savers leaders. I am so excited to finally get to Africa and meet my African sisters and learn from them, whilst being able to share our learning from Hulme. I want to see how they carry out collections, what women are saving for, and the amazing changes that they are bringing for their own communities there.