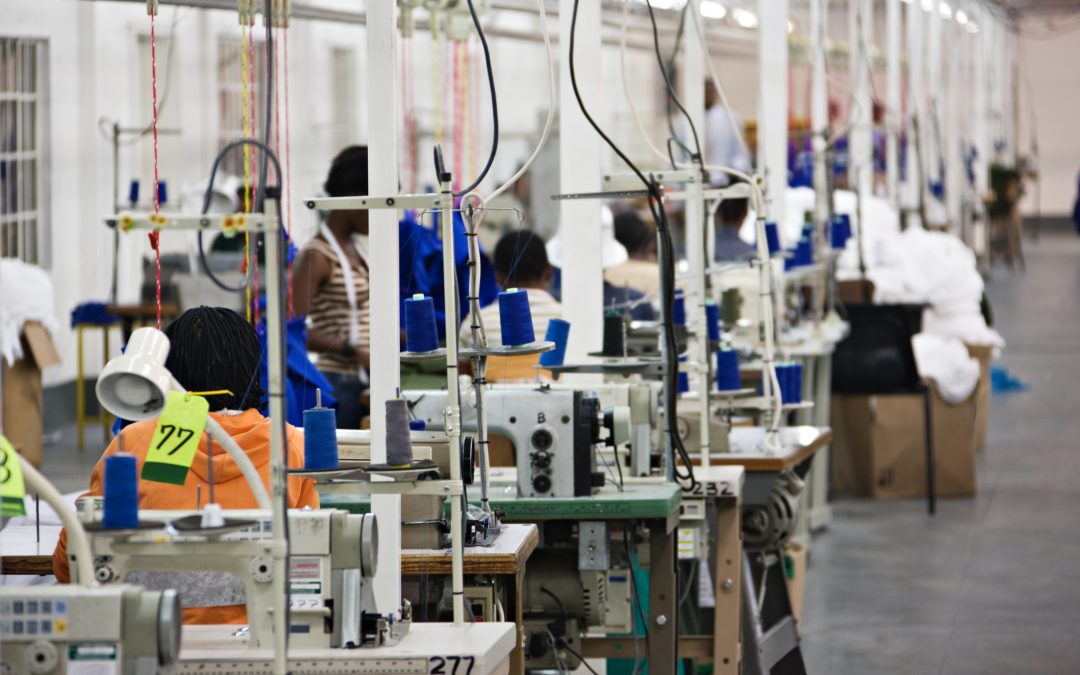 The apparel sector is an exception to the low level of intra-regional trade in Sub-Saharan Africa (SSA). Regional trade in apparel value chains is expanding, especially between South Africa, Lesotho and Eswatini. Eswatini and Lesotho now represent the largest apparel exporters to the region (Fig. 1). Our article explains this development by unpacking interactions between private lead retailers in South Africa and public policy across the region. 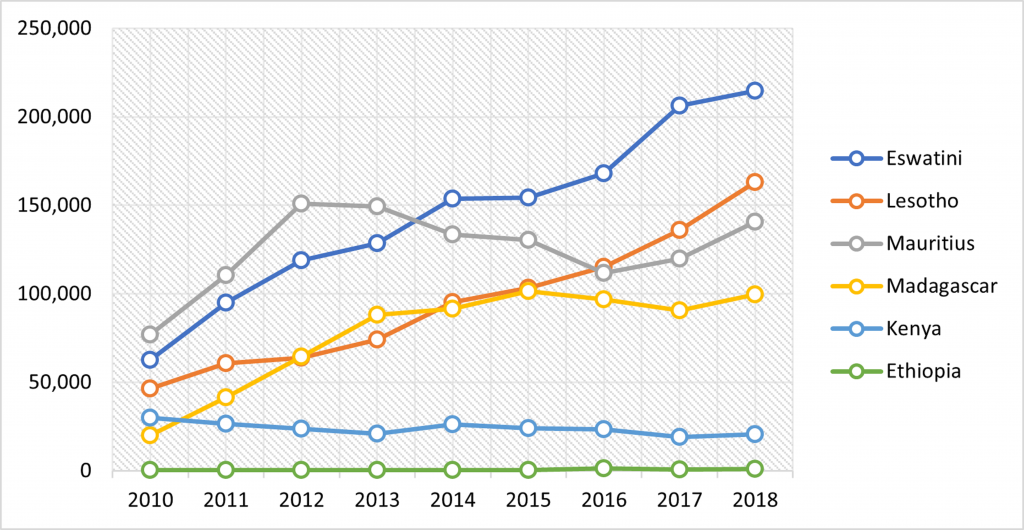 Notes: South Africa is omitted since 96.4% of its exports is constituted by re-exports. Source: UN-COMTRADE.

The growth of apparel RVCs in Southern Africa was predominantly driven by the agency of six major South African retailers via a two-way process. First, the regionalisation of production as suppliers to these retailers sought to reduce prices by relocating production from higher waged South Africa to neighbouring and lower waged Lesotho and Eswatini. This dynamic was accentuated by the process of market liberalisation that followed South Africa’s 1995 membership in the WTO, leading to the reduction of tariffs on apparel from outside the Sothern African Customs Union (SACU) region and the subsequent growth of sourcing from Asia. Consequently, production of clothing within South Africa rapidly declined (Fig. 2). Second, the regionalisation of retailing as the six major South African retailers gradually expanded their presence and sales across the sub-continent. Between 2006 and 2018, South African retailers increased the number of their outlets across SSA by over 250%, stretching as far as Kenya and Nigeria (Table 1). 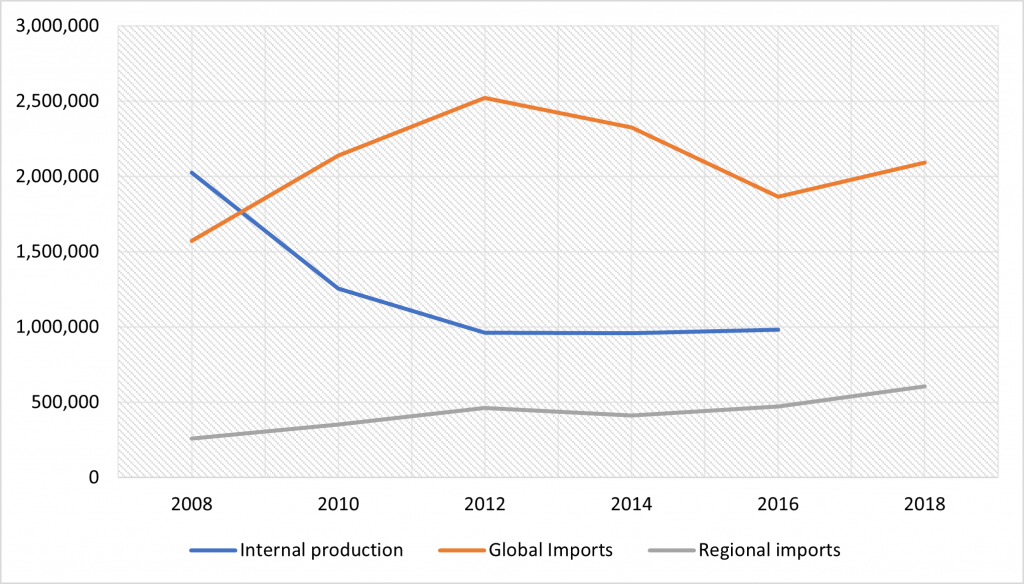 Notes: South Africa did not report imports from SACU before 2011. 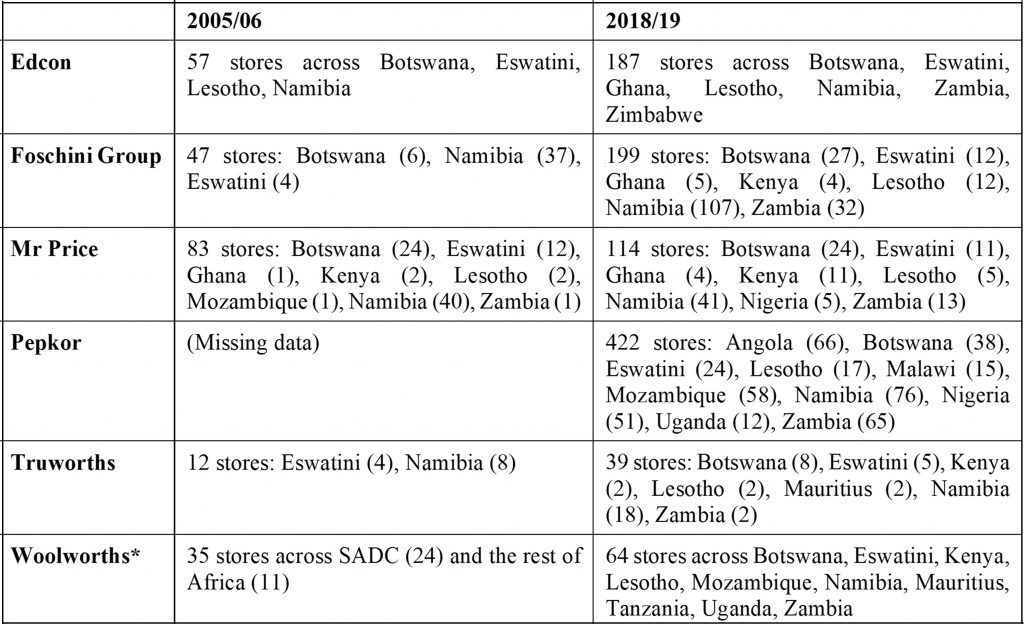 Notes: Since 2015, The Foschini Group, Pepkor and Woolworths have expanded beyond SSA; *Including grocery stores. Source: Authors’ compilation based on retailers’ annual reports and interviews

Despite the importance of private governance, public policy played a critical role in shaping both retailers’ sourcing decisions and suppliers’ participation in South African-led RVCs. This occurred through the interaction between public and private policies that have shaped trade regimes, investment regimes, and labour regimes at the national, regional, and global levels.

Trade regimes: Whilst the African Growth and Opportunity Act (AGOA) created important opportunities for SSA countries to access the US market duty- and quota-free, the level of protection within SACU (40-45% import tariffs for apparel originating outside the region) implies that the South African market remains comparatively better protected from foreign competitors than the US market. This facilitates regional sourcing. As argued in previous studies, a number of South African suppliers with regional linkages successfully leveraged this trade advantage (Morris et al., 2016; Staritz & Morris, 2017). However, the loss of AGOA membership by Eswatini in 2014, due to the country’s lack of compliance with the treaty’s conditions on workers’ freedom of assembly, accelerated a shift towards RVCs also among ‘transnational producers’ whose end market up to that point was solely the US. Although Eswatini was officially reinstated into AGOA in 2018, as of 2020 no apparel producer in the country has shifted back to the US market. When asked why they were not reverting to the US market, 45% or the respondents mentioned ‘higher competition and lower profit margins’ in the US market in comparison with South Africa. Another important factor is the complex and costly bureaucracy and auditing requirements of AGOA, which is not the case for intraregional trade within SACU (Fig. 3).

Figure 3: Reasons cited for not reverting to the US market by Eswatini apparel exporters (2019) 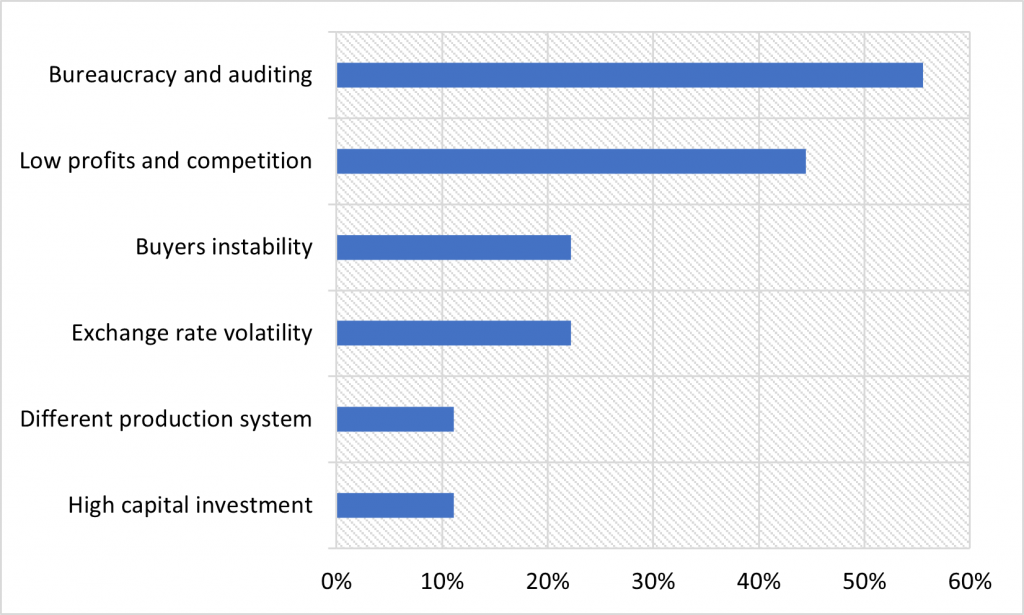 Investment regimes: A number of investment incentives in Lesotho and Eswatini facilitated relocation by South African apparel manufacturers and, more recently, the shifting of transnational overseas exporters from GVCs to RVCs. In Lesotho, since 2004, foreign investors benefitted from a reduced 10% corporate income tax, no withholding tax on dividends, and tax-free repatriation of profits. In the early 2000s, Eswatini introduced a special tax dispensation for exporters under AGOA: an income tax on profits of only 10% (compared to the normal rate of 27.5%), and a 15% withholding tax on dividends paid to foreign shareholders. In addition, since 2007, both countries enjoyed a SACU provision for duty- and VAT-free access to capital equipment and the possibility for firms to operate through ‘deferred accounts’, which allowed them to effectively discount VAT and import duties on fabrics imported from outside SACU. In Eswatini, public agencies facilitated links with South African buyers for three transnational producers and helped them shift to the South Africa market when suspension from AGOA loomed. This included extending fiscal benefits previously restricted to overseas (US market) exporters. Consequently, all large firms previously exporting to the US have renegotiated their preferential treatment to cover their South Africa exports. Thus, investment regimes played an important role in preventing the exit of Asian investors following Eswatini’s loss of AGOA membership.

Labour regimes: A stronger apparel sector trade union, sector-wide collective bargaining, and much higher labour costs in South Africa compared to Lesotho and Eswatini were major catalysts that drove regional relocation and sourcing (Fig. 4). The role of differential labour regimes unfolded over time, running parallel with declining tariff protection in South Africa. In this context SACU’s long-standing duty- and quota-free trade regime, along with Lesotho and Eswatini’s national investment regimes, consolidated the foundation for RVCs. Our fieldwork in Eswatini found that six of the seven (still active) suppliers that initially relocated from South Africa identified ‘union pressures and higher wages’ as the primary motive for relocating. Other reasons for moving include: Eswatini’s attractive investment policy, better security, and external support via foreign governments’ funds (for Taiwanese investors).

Notes: Within these areas there are further sub-divisions captured by the columns’ bars. Source: authors’ data.

What does the future hold for RVCs?

The promotion of RVCs is attracting greater attention by the policy community, especially in Sub-Saharan Africa (World Bank, 2019, p. 234; De Melo & Twum, 2020). Our findings add to these discussions. It is clear that for RVCs to grow there has to be a commercially viable and expanding end market. South Africa’s relatively affluent middle-class consumer base provides that, and the presence of well organised South African retailers ensures the necessary supply chains, distribution systems and retail platforms for RVCs in clothing to emerge. However, for these to grow, regional trade preferences were a key enabling factor. Yet, trade regimes are only part of the policy framework that facilitated the growth of RVCs. Investment policies and labour regimes were also critical. Public policy actors need to consider more carefully the interactions between the distinct policy regimes in trade, investment and labour in promoting RVCs linkages. Together these policy frameworks underlie the need for more carefully considered regional, and in some cases sector specific, industrial policy strategies.

As RVCs grow, there also needs to be a closer interrogation of how labour governance is brought into regional trade preferences. The rise of apparel RVCs in Southern Africa was facilitated by the absence of minimum labour standards in the SACU and SADC trade agreements. This is in sharp contrast to the ways in which core labour standards are incorporated into the trade preferences for the US (AGOA) and EU (EBA) markets, where non-compliance with labour provisions risks exclusion. Our evidence indicates that comparative labour regimes, marked by weak and poorly enforced labour legislation and weaker trade unions in Eswatini and Lesotho, ensured significantly lower wages and thus a potential ‘race to the bottom’ in terms of sourcing practices by lead South African retailers. This finding is particularly important for the African continent at a time when it is on the brink of implementing the African Continental Free Trade Area (AfCFTA). To date, AfCFTA has given no consideration to differential labour standards across the continent, and there is no social clause in the agreement. Whilst its implementation will likely benefit South African apparel retailers, it will also put enormous pressure on labour market institutions as well as employment, not only in South Africa but in Eswatini and Lesotho as well.

To avoid this outcome there is an urgent need to integrate labour provisions in the AfCFTA protocols, thus allowing public governance to promote more equitable forms of regional integration and decent work outcomes. This will be a significant policy challenge given the nature of uneven development in the African continent and it is one that regional policymakers appear to have ignored to date.