1.5 to stay alive? The Power of Least Developed Countries at UN Climate Talks 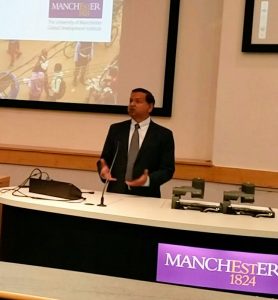 Less developed countries that are highly vulnerable to the impacts of climate change, and which have very low greenhouse gas emissions, make up a substantial majority of nations represented at the United Nations Framework Convention on Climate Change (UNFCCC). How can these countries, which represent so many people at risk from dangerous climate change, exert power at UN climate talks?

Saleemul Huq has been a first-hand advisor to ministers and officials from Small Island Developing States (SIDS), Least Developed Countries (LDCs), and African countries, some of which have joined together in the Climate Vulnerable Forum, a South-South cooperation platform. In his Global Development Institute Lecture, Dr Huq described the remarkable history of Climate Vulnerable Forum (CVF) members’ advocacy for greater ambition on climate change mitigation, which led to a rare victory: an agreed long term temperature goal of 1.5°C warming.

The aim of the UNFCCC is to avoid ‘dangerous’ climate change. But evidence increasingly suggests that limiting the long-term global temperature rise to below 2°C, a previously established target, is not enough to prevent dangerous climate change. Vulnerable countries – such as those with low lying islands threatened by storms and rising sea levels, or those in arid areas at risk of desertification and heat waves – cannot consider a 2°C target ‘safe’. Those vulnerable countries argue instead that a target of 1.5 °C is needed for them to ‘stay alive’.

At the 2009 Copenhagen UN climate negotiations, the former President of the Maldives Mohammed Nasheed – also known for holding a government cabinet meeting underwater to highlight the impacts of climate change – was one of the few politicians from a highly vulnerable country to gain access to back-room meetings between the leaders of the most powerful nations. Dr Huq described how President Nasheed lobbied for the 1.5°C target, but was refused. Nasheed and the vulnerable countries he spoke for were offered instead only a review of the long term temperature goal.

In Paris in 2015, the Climate Vulnerable Forum’s expanded membership were still lobbying for the 1.5°C target. Over a hundred countries were in favour of 1.5°C, but many others including all developed countries and China, India and Brazil among others, were opposed. Dr Huq said that, behind closed doors, the countries in opposition were concerned that meeting a 1.5°C target would be impossible, which would make a commitment seem ridiculous. Yet the Forum persuasively argued that 1.5°C remained possible, and should therefore be included.

One by one, the more developed countries agreed to a more ambitious target, with Saudi Arabia holding out in opposition until the very last moment in Paris. The eventual wording of the agreement committed parties to hold the increase in the global average temperature to ‘well below 2°C’, and ‘to pursue efforts to limit the temperature increase to 1.5°C’. Achieving this outcome in Paris was celebrated as a victory for the most vulnerable countries and the Climate Vulnerable Forum.

However, the target is not as stringent as might be desired. It involves the pursuit of effort rather than commitment to the objective of 1.5°C, presumably to reflect concern that meeting the target would be extremely difficult. Indeed, in 2011 University of Manchester academics Kevin Anderson and Alice Bows-Larkin published research demonstrating the severe difficulty of limiting the temperature rise even to the more generous 2°C target, despite high-level politicians’ statements to the contrary.

Thus Dr Huq’s story of success is over-shadowed by an ongoing darker history of failure to sufficiently reduce greenhouse gas emissions in the most developed countries, and highly inadequate outcomes in Paris. With the recent election of Donald Trump to the presidency of the United States, the outlook for the most vulnerable countries just got bleaker. Much as it is encouraging to hear of vulnerable countries’ successful political organising at UN-level, the Climate Vulnerable Forum and allies will somehow need to command much more power and support if their agenda to restrict warming to 1.5°C is to be anything like achievable.