In March 2015, I am glad (and relieved) to report that I passed my PhD viva. Four years of grit and determination culminated in inevitable questions such as “What is your theoretical contribution?” and “Why did you choose a social constructivist approach?” All valid questions I absolutely agree; however, they significantly differ to the questions which I was confronted with this May when disseminating findings in my case site. Nevertheless, this experience was one of the most nerves wracking and rewarding of my research so far.

My thesis explored grassroots disaster risk reduction in three urban neighbourhoods of Cochabamba city in Bolivia. This area frequently experiences small-scale landslides (landslides which may directly affect one or two houses). One of the key findings shows that residents often perceive disaster risk reduction as the responsibility of the household because it is not perceived as a ‘traditional’ development goal or ‘collective good’, such as water, electricity or sanitation. This is considerably hindering the effectiveness of grassroots strategies that people are carrying out; therefore, I decided to focus dissemination on the idea that disaster risk reduction would be better addressed through collective action, including collaborative actions between neighbours and the mobilisation of residents in order to pressure the Municipality for support, whether through subsidies for self-build housing or improved urban planning for example.

Five days beforehand, I placed posters across the neighbourhoods in order to advertise two events where I would share my results. I made sure to highlight that this would be an informal event where people would have the opportunity to voice their opinions and ask questions about my research (and enjoy some free food). I was extremely pleased with the turnout and was greatly encouraged by the amount of engagement and interest from people who asked questions, made comments and provided some insightful suggestions about my research findings.

Many people used this opportunity to highlight frustrations about the behaviour of their neighbours. Specifically, many houses are built without rain gutters, and so water often runs from the roof of one house down onto the houses that are located below; this can damage houses and destabilise soil, which may lead to a landslide. This reaction was not at all surprising as the personal relationships between many neighbours is a reason why disaster risk reduction is not being addressed collaboratively. However, this particular feedback has further encouraged me to build on my PhD and investigate disaster risk reduction as a form of the ‘commons’.

Information leaftlet given to participants 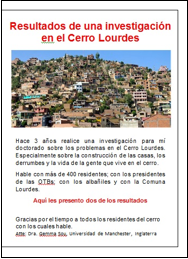 I was also taken aback, but not altogether surprised that many residents asked technical questions, broadly related to geology, engineering and disaster proof architecture, as they wanted to know if their house would be affected by a landslide. Alas, and feeling rather impractical for it, I again explained that my research focuses on the social aspects of disaster risk and that unfortunately I was unable to make such a prediction. I have subsequently been told by other colleagues who work in development, that this sort of reaction is not an uncommon experience for social scientists.

In contrast, many residents seemed genuinely enthused and interested when I highlighted Bolivian laws and international agreements such as the recent Sendai Framework for Disaster Risk Reduction 2015-2030. These broadly focus on reducing disaster risk in areas such as my case site, including developing the capacity of local authorities to work with neighbourhoods in order to address disaster risk. The legal responsibility of the Municipality in Cochabamba to intervene in preventative risk reduction of small-scale disasters is something that many people were not aware of. This is largely because officials of the Municipality often use technocratic techniques and language in order to frame landslides as natural phenomena, which ultimately absolves themselves from responsibility to intervene. As such, many residents were commenting on the need to learn more about these laws and use them when seeking official external support.

Of course, I have no delusions that my findings will have the amount of impact that all researchers hope for. However, having a second opportunity to thank participants, and to provide information and advice about how their situation may be improved (if they choose to act on this), is something that I consider a significant component of ethical research and something that I plan to continue throughout my research career.