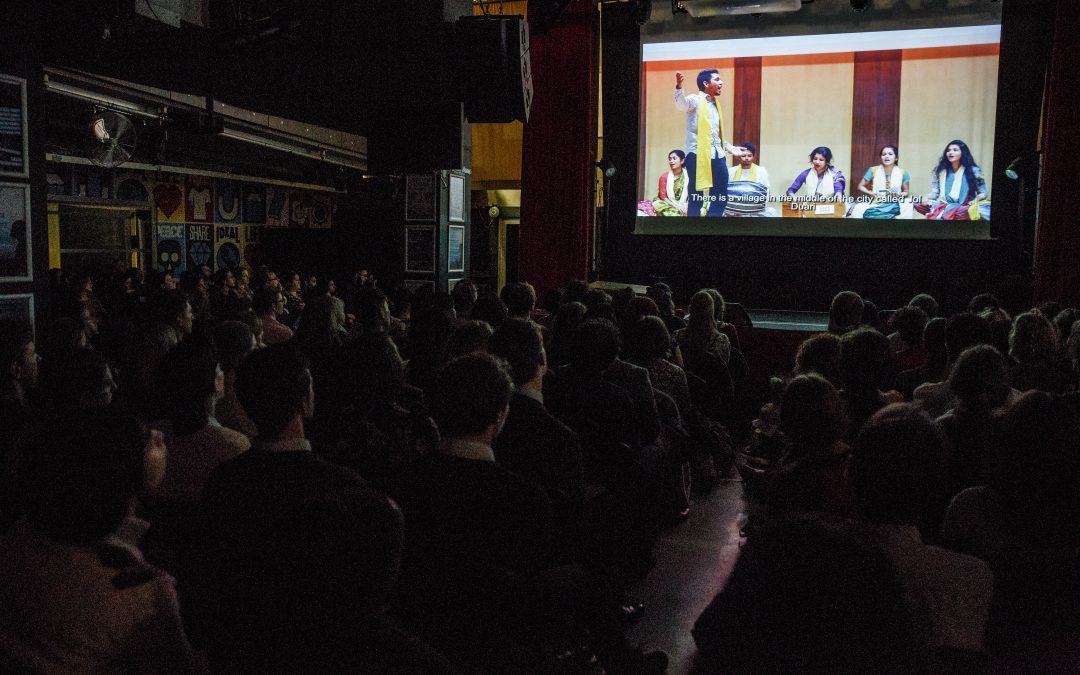 Dhaka is on the front lines of climate change, but what does that mean to the people living in its slums? Research into urban climate change resilience, led Dr Joanne Jordan to team up with the University of Dhaka to produce a Pot Gan, a form of interactive indigenous performance theatre, to encourage slum dwellers, researchers, practitioners and policy makers to reflect on the day to day realities of living with climate change in low-income settlements in Dhaka.

Dr. Joanne Jordan’s The Lived Experience of Climate Change project hit the road again recently to bring the stories from Dhaka slum dwellers to a standing room only crowd of 200 people at Rich Mix in east London.

True to the premise of the Pot Gan performances in Dhaka last year, the evening took on an interactive theme, with audience members actively engaging with the personal experiences of slum dwellers affected by climate change. 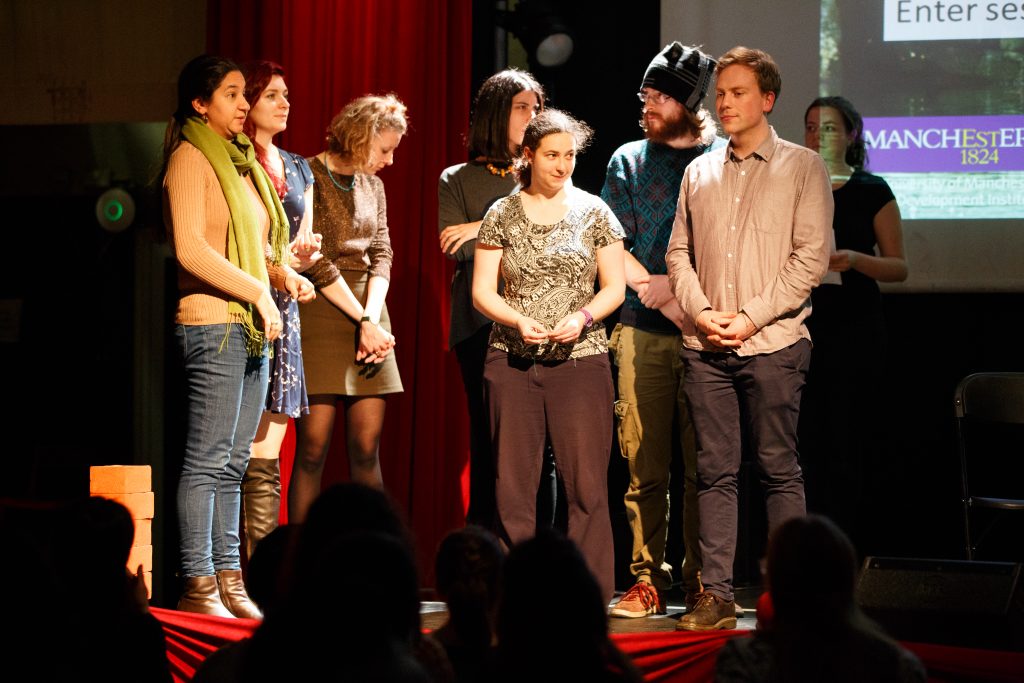 Audience members standing in an area measuring 8 feet by 7: the size of some of the houses in the Dhaka slum featured in Joanne’s research (Copyright: Minna Rossi Photography).

We were fortunate enough to be joined by Dr Saleemul Huq, a Bangladeshi climate expert. In conversations with Joanne, he helped set the scene, telling the audience that in Bangladesh the 1 in 20 year floods had become a 1 in 5 year event. 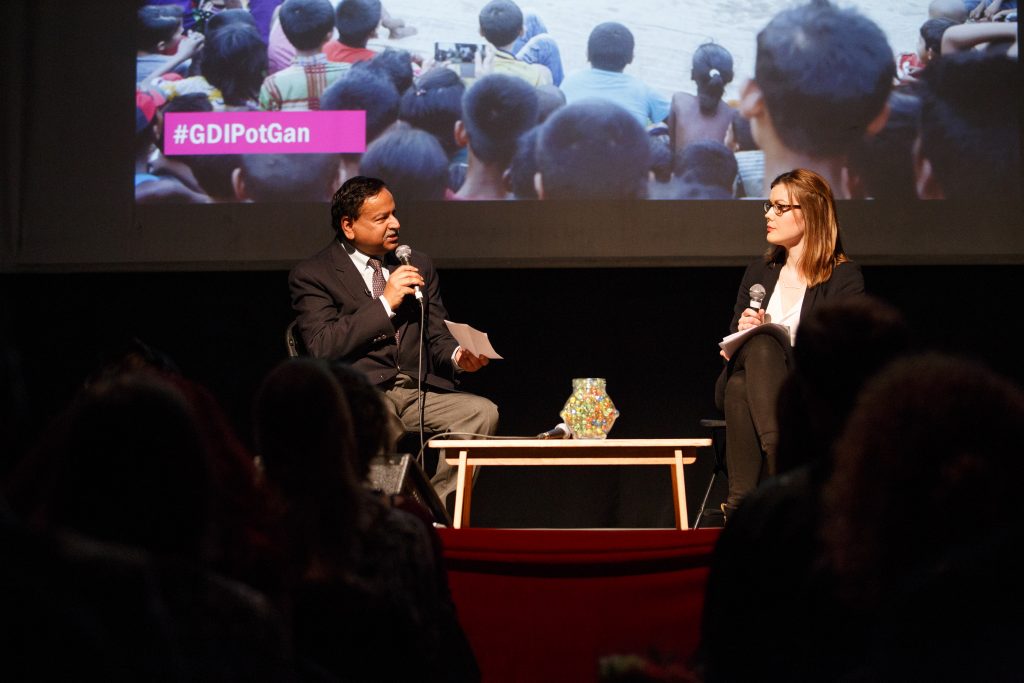 In conversation with Joanne and Saleemul (Copyright: Minna Rossi Photography)

To give a flavour of the Pot Gan, key scenes from the performance in Dhaka last year were re-enacted by pupils from Regent’s High School. With extremely limited rehearsal time, they did a fantastic job of connecting the audience to the original Dhaka experience. 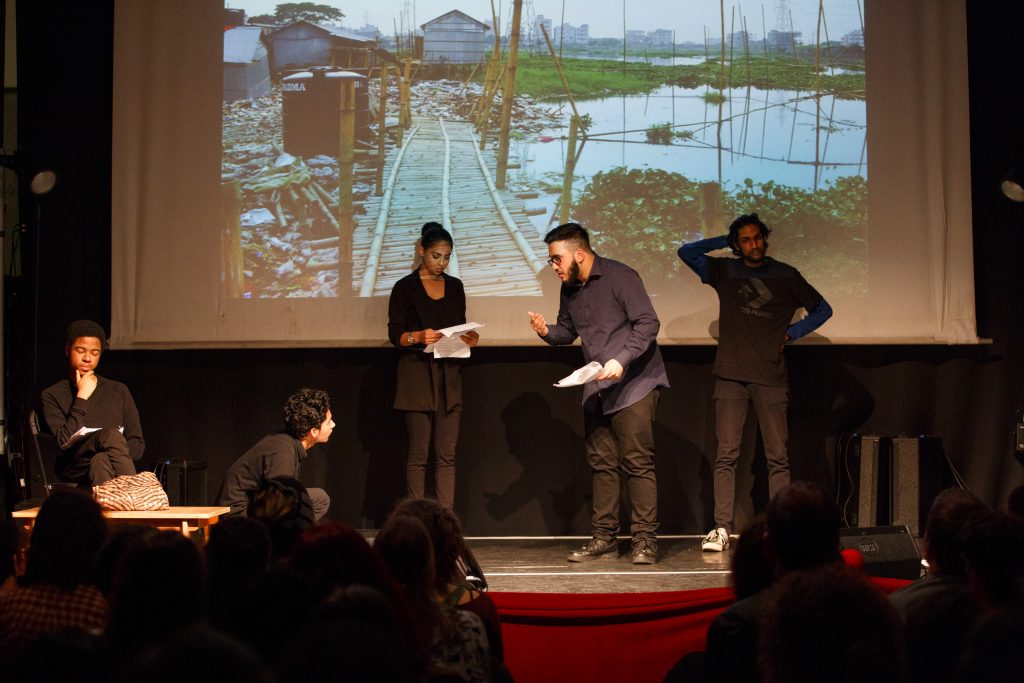 As a bonus, the play also featured a University of Manchester alumna, Amy O’Tool, who set up Tie-Dye Drama to inspire more young people to get involved with social issues.  Alongside Nigel Townsend of Theatre of Debate, Amy also expertly compered the evenings events..

The main event was a screening of ‘The Lived Experience of Climate Change: A Story of One Piece of Land in Dhaka’ documentary (Director: Ehsan Kabir, Green Ink), which explores Dr Joanne Jordan’s findings on the everyday realities of climate change. It once again received a fantastic response from the audience.

The event proved effective in deepening engagement and understanding of the everyday realities of climate change. Over 60% of the audience said that they care more about climate change as a result of the event.

Big thanks go to Rich Mix for hosting the event and to the Brick Lane Circle community group who helped with the promotion and catering.

You can view photos from the event here

For further information on the project