What does Habitat 3’s New Urban Agenda mean for the displaced? 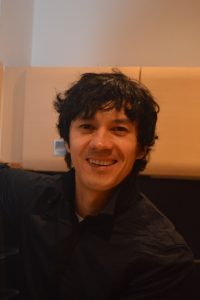 This month more than 25,000 delegates meet in Quito, Ecuador, for the Habitat 3 conference which sets out the United Nations’ New Urban Agenda – a guide to policies and approaches for the sustainable development and planning of cities and towns across the globe for the next 20 years. As part of The University of Manchester’s research beacon for Addressing Global Inequalities, we bring you a special series of blogs from some of our leading researchers.

In our fourth and final post of this series,  Luis Eduardo Pérez Murcia  relates the UN’s New Urban Agenda to one asylum seeker’s experience.

The lottery of life

20, 28, 42, 57, 107, 111 and 114b. These are not winning numbers. They are the numbers of the seven clauses which reference “the displaced” within the New Urban Agenda – and yet perhaps in that regard they could create winners in the lottery of life, if the agenda achieves its aspirations over the next 20 years.

Perhaps clause 28 is the strongest aspiration of how Habitat 3 hopes to aid the home lives of the displaced: “We further commit to strengthen synergies between international migration and development, at the global, regional, national, sub-national, and local levels by ensuring safe, orderly, and regular migration through planned and well-managed migration policies and to support local authorities in establishing frameworks that enable the positive contribution of migrants to cities and strengthened urban-rural linkages.”

So let’s move for a moment from the broad aims above to my research experience of one person’s reality. An area of research interest for me has been the ongoing war in Syria which has left millions of people displaced either within or across national borders.

A story of one Syrian…

Noor came to England as an international student in 2014. She is an example of how not all Syrian asylum seekers and refugees fled following direct threats and violence. As Noor’s experience illustrates, some left their country to pursue professional and academic careers but, because of war, cannot return.

Noor was accepted by The University of Manchester but was concerned about whether or not she would be able to obtain a visa, having heard that visas for Syrians – even those who are sponsored students – were being rejected. However, Noor was able to study here and upon finishing her studies she returned ‘home’ as planned.

However, after only one day at home in Damascus it became clear that what the international media called an ‘uprising’ and later a ‘crisis’ was indeed a ‘war’. ‘Home’ was no longer a safe place in which Noor could pursue her dreams and achieve her aspirations. When she returned to Manchester to attend her graduation ceremony it crossed her mind that England, a place in which she had had such a wonderful and productive time, could become her next home. She applied for refugee status and immediately shifted from being an international student to being an asylum seeker. 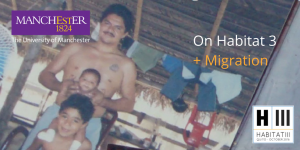 “Home is the place you feel you can contribute the most”

Noor’s story tells us something about what and where home is and what it means. She says that “home” is a tricky concept and one that is hard to define. Ultimately she says, “Home is neither my country nor the physical house where I was living in Damascus. Home to me is more a feeling”. Having spent a significant part of her life living in other countries including France, Saudi Arabia, Lebanon and England, Noor says, “I see life as a train station. I am always ready to move”.

Noor experiences home as a mobile space. “I feel at home in a place I like. I think family is central for my understanding of home but home is also the place you feel you can contribute the most. I am volunteering as a research assistant and bringing support to refugees in the UK, so I think England could now be my home”.

This personal feeling of Noor is very much in line with Clause 28 of the New Urban Agenda which aspires to “enable the positive contribution of migrants to cities and strengthened urban-rural linkages.”

She stresses that she is an independent woman able to work and contribute to society just like other refugees. She added, “If I am granted permission to stay, I will work, I will pay taxes and I will do my best to contribute to this society”.

However, waiting for the Home Office concerning her status in the UK is not free of tension and she is anxious about the future. Noor told me “I feel trapped in limbo. I am not saying I feel in limbo living in England. I can make this place my home. What I mean is that I feel trapped in limbo with my Syrian passport. I cannot work or move anywhere. In order to feel at home I need papers. I need the permission to stay”.

Noor’s emphasis on the need of ‘papers’ to feel at home in England can be better understood if we consider the role of the symbolic value of material things in the process of home-making. I asked Noor if she had brought anything with her to England that reminded her of home in Damascus. The answer was an envelope which Noor brought to England. It contains her academic diplomas, language test results, letters of reference and her passport. When asked why she chose the envelope she simply replied, “That is what I am. Thus, that is what I need to make a home for myself in this country”. 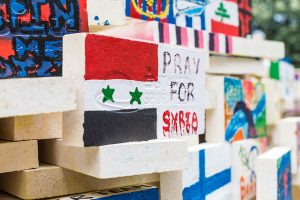 What will the New Urban Agenda can mean for people like Noor?

Noor’s experience is only one of millions of Syrians who have fled conflict or who cannot return to their country because of the escalation of war. Having to make a new home away is an experience shared by many of the over 60 million people currently living in conditions of displacement across the world.

Her experience helps us to unveil the multiple challenges of putting in practice complex clauses of the New Urban Agenda. How governments, policy makers and the international community can strengthen synergies between international migration and development (clause 28) when asylum seekers are not entitled to the right to work in many countries is just one issue raised by Noor. A significant challenge is therefore how to ensure that displaced persons, both those who move within and across national borders, are able not only to make a living but also to find their place in the cities where they are already settled or aspire to migrate.

Thus, rather than thinking of migration as a problem and migrants as people who need to be kept in their place, the big challenge for the new urban agenda is to understand migration as an historically constructed practice and migrants as purposive actors in the city landscape. Displaced persons, as sociologist and researcher Dr Maja Korac stresses, are ordinary human beings living in extraordinary circumstances.

They are just people like us trying to find a safe place to live in the world.