How the poor borrow

This is the third in a series of short articles about the findings of a daily ‘financial diary’ research project. A description of the project can be found at its web-site. Details of the poverty levels of our 50 ‘diarists’ can be found in the article on savings listed on the publications page there. In short, they fall into four classes, ranging from extreme poor to near-poor. In this article, we look at the borrowings of our diarists, using daily data for the period from March to October 2016.

A minority of non-borrowers
We have complete daily transaction records for 49 diarist households for that 8-month period, during which 43 of them borrowed, made repayments on borrowings, or (mostly) did both. That leaves six who did not borrow nor repay – so who are they? Our Table shows they are a mixed bunch, not restricted to any specific income level, occupation, or household size. They all save.

Some totals and averages
Between them the 43 actively borrowing diarists took 201 loans – on average 4.7 loans each – in the eight months, and made a total of 3,208 repayments – on average 75 each. The total value of all these loans was a little over two million taka, the equivalent of $53,600 on a PPP basis. The total value of the repayments was 2.35 million taka, or $58,800, so they reduced their debt over these eight months. These figures for borrowing and for repaying are remarkably high in relation to net income, which totalled $70,570 for the group for the period. Clearly, borrowing and repaying loans is a major activity for these households: their repayments were equivalent to 83% of their income.

What kind of loans?
Did they borrow too much? To start thinking about that, we need to know a lot more about where these loans came from and what they were used for. Our chart shows the number and median values of the five main sources of loans.

Six out of every ten loans taken were ‘howlats’ – interest-free loans taken from friends, family, employers and colleagues. They were usually of low value: only 7 (out of 120) were for more than $250, and their median value was $25: some were as small as $2.50. The smaller they were, the quicker they were repaid, often within a few days and in a single lump-sum repayment. In all, they accounted for just over a fifth of the value of all loans taken. Typically, they were taken to smooth consumption, to meet unexpected needs, or to make MFI repayments on the due day. A handful of the bigger ones were used for businesses or for major expenditures like buying or registering land, or for emergencies. Diarists of all income classes take howlats, and many also give them to others. We can regard howlats as the community’s way of creating liquidity in the absence of bank accounts, payment cards, and ATMs: they harm no-one and are almost always helpful.

Our chart shows two more informal sources. By ‘informal loans’ we mean interest-bearing person-to-person loans: these are sometimes called ‘moneylender loans’ but in fact none of the lenders in these cases are professional moneylenders – they are just people with some extra cash available to lend out. The median loan value is high, and our diarists used them for health emergencies (two cases), to buy food during a spell of unemployment, for house construction (two cases), to buy land, and to repay an MFI loan. Lenders usually ask for as much as 10% a month in interest (or less if gold is offered as collateral), but seldom manage to achieve that rate in practice, sometimes because the borrowers are poorer relatives with whom it is hard to be very tough.

A quarter of all our diarists use local savings clubs of one kind or other, and sometimes they borrow from them – not often, and in low values, as the chart suggests.

On the right side of the chart are the two big ‘semi-formal’ lenders, the MFIs and their rivals the Co-operatives. Most of the bigger loans come from these two sources, with the MFIs in the lead in terms of the number of loans and their median value. Note that there are no loans whatsoever from formal banks (though some diarists use them for saving). Here, we will zoom in on MFI lending. 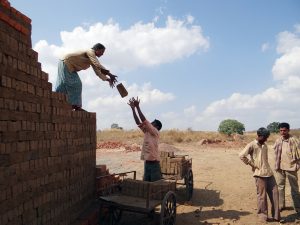 Who uses MFI loans, and why?
Of our diarists, 31 (three-fifths) took or repaid MFI loans in the period. They come from all the income classes, though the better-off near-poor were more heavily represented: three-quarters of them used MFI loans whereas only half of the extreme poor group did. The two diarists who took the biggest loans are sophisticated borrowers well-used to dealing with MFIs. One is a near-poor dealer in saris who borrowed $3,575 from Grameen Bank (some of it through proxies) as part of her campaign to get her son sent to work overseas: her financial manipulations are discussed in more detail in our Interim Report (pages 19 and 20). The other is perhaps our most entrepreneurial diarist, in our very poor income bracket but likely to rise out of it. He and his wife have government jobs as hospital peons, and recently opened their own drug shop opposite the hospital. In October they borrowed $2,500 from the MFI ASA, not to invest directly in drugs, but to pay off an earlier loan from Grameen: the ASA loan has a longer duration (two years) and repayments are monthly, which will match his monthly government wage better than Grameen’s weekly dues. They also borrowed another $1,500 from other MFIs in the period. Neither of these two borrowers are likely to have much trouble repaying, so their loans (at around 22% to 27% interest per year) represent good value to them and very good business for the MFIs.

The next biggest MFI borrower in the period, however, is a member of a group of diarists who have not done well with their MFI loans – small shopkeepers. They tend to be targeted by MFIs and to end up over-indebted. That is the case with this borrower, who took $1,750 from the MFI PIDIM in August and then $750 from IDF in October, in each case largely to pay off earlier MFI loans. This predicament for shopkeepers is also explored in the Interim Report (pages 24 to 26).

Some MFI loans are of zero utility to the borrower but are taken as a condition of being allowed to save at the MFI. In one case (Interim Report pages 22 and 23) the unwanted loan was very big – $1,250 – simply because the borrower had a particularly large savings balance. Another reluctantly took a $500 loan to protect his accumulating savings account at Grameen. More often, a lower-value loan is taken to satisfy this condition. In other cases, MFI loans get taken just because a previous loan was repaid and the MFI presses its client to take another. One diarist is a brick-breaker who also does some faith-healing: when his wife paid off one MFI loan and came home with another worth $750 he told us he didn’t need it but thought he might repair his house with it. Three month later, noticing no building work, we asked again, and were told he still hadn’t made up his mind. Another three months later he told us he’d spent much of the loan money on ‘this or that’.

The remaining MFI loans in our sample for the period are of medium value and used for a mix of purposes. A small number are invested in small business, just as MFIs recommend. An extreme poor office cook, for example, borrowed $500 for her daughter, who makes dresses at home and helps look after her parents. A snacks-vendor took $250 to repair the wheeled stall he sells from. Other loans are for income-smoothing: a near-poor diarist whose husband is abroad but whose remittances, though large, are irregular, maintains her MFI account so she can borrow when there’s a long gap between remittances. An extreme poor divorcee who breaks bricks for a living took a $500 MFI loan to reroof her shack.

These brief notes suggest that much MFI borrowing is being absorbed into age-old borrowing traditions, supplementing but not replacing the informal systems. Some MFI loans are especially useful because they offer larger sums at lower cost than the borrower could find elsewhere, but in other cases MFI borrowing has led to over-indebtedness, and too many loans are pushed at the borrower rather than being demanded by the borrower. But as another of the articles in this series suggests, borrowing may be steadily giving way to saving as the preferred way to assemble the lump sums that these diarists need to run their lives.

Scratching the surface
There is much more to tell. We haven’t discussed loan balances here, for example, nor have we analysed repayment behaviour. Financial diaries are a good way to explore these issues, and any reader who would like to grapple with our data can get them from the author at write.ser@gmail.com