Since May 2015 the Hrishipara Daily Financial Diary project has been recording all the daily money transactions of a sample of low-income households living in central Bangladesh.

At the end of March 2021, we asked them about the transactions they hadn’t made. The question that Project Manager Kalimullah put, privately, to each of our 60 diarists, was “during the month, were there things you needed to spend money on, but couldn’t, for some reason?”

Most diarists did not experience ‘unfulfilled spending’

Of the 60 diarists, 38 replied ‘no’. Most of our diarists, then, managed to buy most of the things they needed or wanted in March. What about the other 22?

Was it because they’re too poor?

We wondered whether the 22 households who experienced unfulfilled spending were among the poorest in our sample. We have the data to explore that possibility and in Table 1 we show all 60 of our diarists arranged according to their household’s average daily income [note 1], with the lowest on the left. Those diarists with unfulfilled spending in March 2021 are highlighted, and there is no apparent correlation between income level and experiencing unfulfilled spending. We will come back to this when we look at the kinds of spending that went unmade.

Or because of their money-management practices?

We record, each week, how much cash our diarists have in hand. Some balances are quite large. During the corona-related lockdown and its aftermath, many diarists drew on those balances to survive, as noted in this paper. Might the strength of this habit also relate to whether diarists experienced unfulfilled spending in March? Table 2 shows the diarists arranged according to their average cash-in-hand balance relative to their household’s average daily income[note 2].

Table 2 shows that the quarter of all diarist households that habitually hold the highest levels of cash relative to daily income – a group that includes both poorer and richer households – experienced no unfulfilled spending in March 2021. This may be just a coincidence[note 3], but the result is intriguing, as it suggests that holding high levels of cash reserves is an important strategy for making sure that spending wishes are fulfilled. We will explore this further as we get more data from future surveys, and through conversations with our diarists.

We checked some other characteristics of our diarists that could conceivably be associated with unfulfilled spending, like age, occupation, and education levels, but found no correlation. We move on to examine the items that they failed to buy, as set out in Table 3.

It is striking that none of these items are ‘survival spending’. Most are investments in the future, either in comfort (such as repairing homes and installing wells) or in businesses (such as farming or shop stocks or machinery like sewing machines). The list suggests that our diarists are now moving beyond their corona-related setbacks and thinking about how to rebuild their futures. No one reported being unable to buy basic foodstuffs. 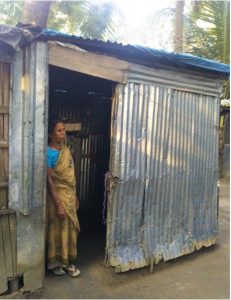 But why couldn’t they buy these things? Kalimullah asked about that, too. Almost every diarist’s immediate response was ‘shortage of money’, so Kalimullah dug deeper, asking about the cash reserves they hold at home, any savings they have, and their ability to take loans. Six of the 22 said they ‘didn’t have savings big enough to finance this purchase’. Other replies revealed rather conservative attitudes towards money management. Nine said that they had savings but were reluctant to use them because their savings were their safeguard against serious future difficulties. Seven said they had savings in accounts at MFIs, but since the pandemic struck the MFIs had become reluctant to release savings to clients with loans from them. This reluctance by MFIs to release savings looks to be a worrying development, but our diarists were not up-in-arms about it. Perhaps they welcomed this extra restraint on using savings that might become vital in the future.

Regarding loans, two diarists said that the intended spending was not important enough to go into debt for. Two more said that they tried but failed to secure loans. The vast majority again gave conservative responses, like the following examples:

‘No I didn’t try to take a loan, because I don’t like borrowing’ (for a sewing machine)

‘No, I’m already holding a moneylender loan of 20,000 taka, for building my cow house, and if I borrow more it would be difficult to repay’ (for buying livestock)

‘No , it would not be wise to take a loan as my income is not enough to repay it reliably: and I will need to borrow soon for a new battery for my rickshaw’ (for house repair)

‘Well, it’s not immensely important to attend the marriage, and in future some other need may be serious and at that time I would need a loan’ (for attending a wedding)

These are the responses of low-income households in a country that has had forty years’ experience of learning to live with the plentiful credit offered by MFIs.

[1] Average daily income, where income is defined as earned income, business income (revenues less costs), gifts, grants and remittances) taken from our daily records from January 2019 to February 2020 – that is, before the corona-related lockdown disturbed their usual patterns. Borrowing and saving do not appear in these numbers.

[2] Based on our weekly surveys of cash-in-hand from early 2018 to date. We use the average level of cash-in-hand and express it as a multiple of each diarist’s average daily income.