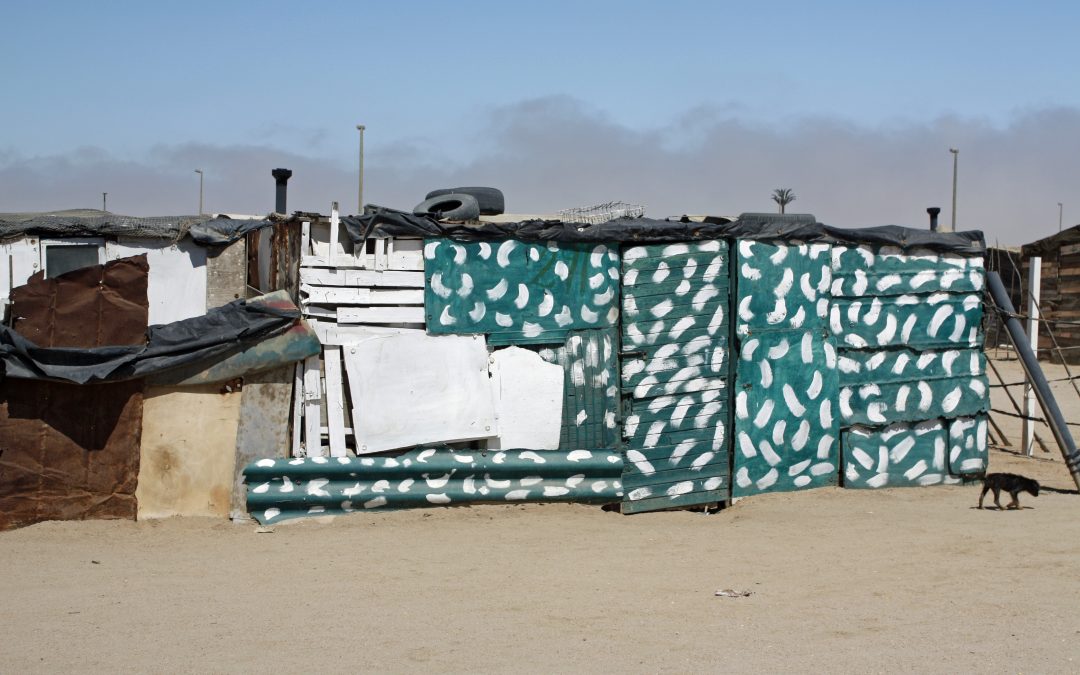 Months after starting the partnership project on upscaling participatory planning, the Bulawayo partnership has already begun a process of making sure that the community experiences start to filter into the academic sphere and vice versa. Recently, the parties gathered in Bulawayo, Zimbabwe for a community lecture hosted by the National University of Science and Technology’s (NUST) Faculty of the Built Environment. Communities from the profiled slums were also in attendance.

Meanwhile, the citywide profiling exercise has been ongoing with the parties updating existing profiles while also targeting new slums which have been identified. The community lecture, themed around “planning and cities urbanising informally”, focused on the citywide slum profiling experiences and the implications of these on the current city planning and development process.

Prior to the community lecture, 16 third-year students from the Faculty of the Built Environment joined the Bulawayo Federation teams during the slum profiling exercise. The fieldwork experience was meant to inform presentations and more precisely change ideas that would then be shared by participants at the community lecture. The fieldwork targeted Ngozi mine dumpsite, Iminyela, Vundu and Burombo hostels. The plan was to jointly document the socio-economic realities in these settlements and then use the lecture to trigger conversations around the practical steps the communities, in partnership with the local authority and the university, can begin to undertake. 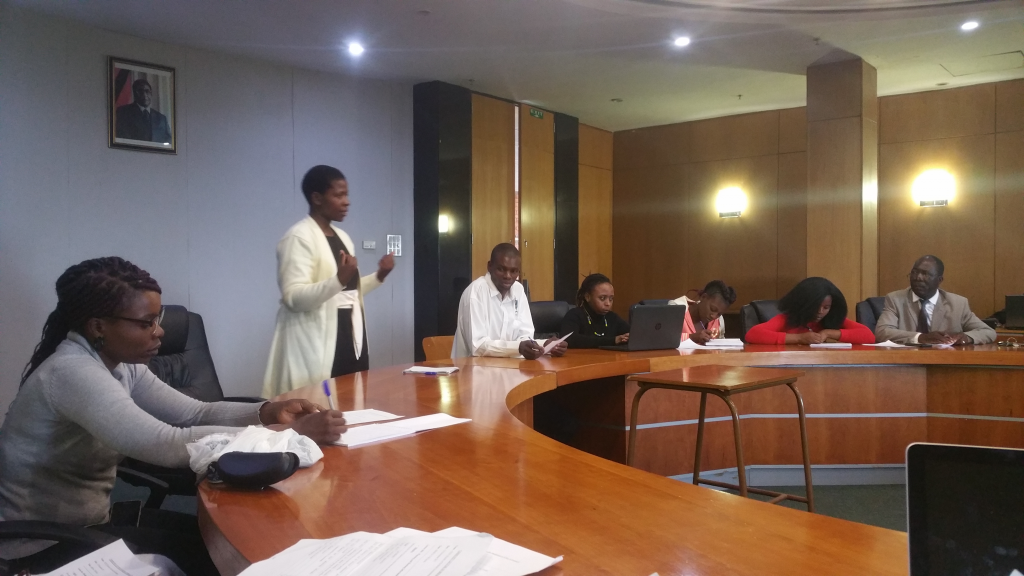 The citywide profiling exercise involved conducting focus group discussions with the settlements residents alongside the physical mapping of amenities and boundaries using GPS gadgets. These focus group discussions were designed to generate grassroots dialogue which encouraged communities not only to reflect on their challenges but also to trigger conversations around how these issues can be tackled.

The mapping process constitutes a crucial tool through which slums could become spatially integrated with the mainstream city. Slums are often missing from city maps with spaces which they occupy depicted as open spaces. Therefore, community-led mapping presents huge opportunities for spatial inclusion with the city. Additionally, equipped with either hand-drawn or GIS-based maps, communities can start to visually imagine the urban services gaps in a very different and yet powerful way that builds negotiation capacities.

The community lecture started with a presentation by the Bulawayo Federation which reflected on the citywide slum profiling process. Sazini Ndlovu, one of the Federation leaders, explained how the alliance had used the enumeration process as part of a range of tools developed by the Slum Dwellers International (SDI) for mobilising, organising and strengthening the urban poor in cities. More recently, these citywide settlement profiles had been improved as a tool for facilitating upgrading of slums, enabling the urban poor to generate data that could be used to engage city authorities. The presentation explained how the profiling process had been pioneered in Zimbabwe through the Harare Slum Upgrading, where 63 slums had been jointly profiled and mapped. In turn, the Zimbabwean slum profiling process had benefited largely from learning exchanges with SDI affiliates from Africa with a rich history of community-led data collection experiences, such as Kenya, South Africa and Namibia.

Sazini outlined how signing of Memorandums of understanding (MOU) with city governments had made it possible to get the commitment of cities like Bulawayo to roll out a city slum profiling programme. MOUs were crucial in providing an enduring framework within which the urban poor could draw support from the city governments and guarantee implementation beyond the city officials currently in office. Two MOUs with NUST and Bulawayo City Council were signed in 2014 and 2015 respectively. It is through the MOU with Bulawayo City Council that the Federation has been able to secure technical support from council staff around the housing and infrastructure projects. Additionally, through engagement done under the MOU, the city officially adopted ecological sanitation toilets as part of alternative sanitation. Currently, there are also plans to initiate a joint city fund for financing slum upgrading activities under the MOU with the city.

A presentation by Samukeliswe Ndoro, a Federation national leader supporting enumerations, then dealt with the specific issues emerging from the current profiles conducted in Bulawayo. She reported that 9 slums had been profiled in Bulawayo over a two-year period with an estimated 31,547 people making up 10,690 households. The slum profiling process was led directly by the slum communities, supported by a partnership made up of NUST, Bulawayo City Council, the Alliance of Dialogue on Shelter and the Zimbabwe Homeless People’s Federation.

A citywide slum profile report documenting the experiences of the urban poor in these communities was produced as a result of this work. This report has become a very important reference point in conversations about the plight of the urban poor in Bulawayo. For example, in one of the slums which is located at the Ngozi Mine Dumpsite, there is a population of 1,208 people without access to potable water. The presentation highlighted how the Ngozi mine settlers have to contend with using a single pit latrine resulting in the majority resorting to open defecation. Samukelisiwe explained that the residents prioritised securing land as the one way of escaping the poor water and sanitation conditions they had to deal with on a daily basis. As part of the strategy respond to these issues, the Federation had set up housing savings schemes to help organise the residents in preparation for engagement with city authorities.

In Iminyela, it was reported, the profiling exercise had triggered sanitation upgrading after the process had revealed a dilapidated sanitation infrastructure that was being used on a communal basis. The partnership also went on an exchange to Cape Town, South Africa where similar upgrading works were underway, helping to frame the kind of activities that the team would implement back home. Over a period of two years, a total of 325 water-borne toilets had been constructed through a loan of US$379 per household from the Federation’s loan fund. This 80% of the total cost with the remaining 20% a result of community contributions. As well enabling Iminyela residents to access improved sanitation, the participatory upgrading project has also paved the way for the regularisation of the tenure conditions. That is, after constructing individualised household toilets residents then qualify to approach city authorities for freehold title. Whilst this sanitation intervention has huge prospects for increasing land tenure rights for Iminyela residents, the costs associated with individualised household toilets has slowed down the uptake of the sanitation loans. In order to address these challenges, the Federation has been promoting savings to help create local level financial mechanisms that will help to reduce the burden of the loans. Meanwhile, Bulawayo City Council has also pledged to contribute part of the plumbing materials and it is envisaged that this could be another way of lessening the financial burden associated with huge costs of constructing a conventional water-borne individualised household toilet.

The presentation by the students from NUST was based on their field experiences in Nguboyenja and Makokoba where they were part of the team that profiled Burombo and Vundu hostels. This presentation also drew insights from the Iminyela visit where toilets built under the sanitation upgrading initiative were being commissioned by Bulawayo City Council. On the academic side, the students were supposed to link the field experiences and hence the presentation with one of their courses – ‘Issues of housing in developing countries’. The presentation highlighted the housing issues in the hostels where a majority of the infrastructure facilities are now dilapidated. In Burombo hostels, for instance, built in the 1950s, raw sewage now leaks from broken down old sewer pipes posing real health risks. As if these challenges were not enough, each toilet was also shared by 5 households averaging 25 people per each unit. The students also pointed out the hostels’ architectural design issues that compounded the challenges that residents encountered on a daily basis. A range of possible solutions were presented by the students as part of practical steps to address the informal housing conditions. Bulawayo City Council was challenged to support the upgrading of the facilities at Burombo and Vundu in partnership with the residents. The students also proposed introduction of Federation groups as a way of organising the residents around community-driven upgrading efforts. 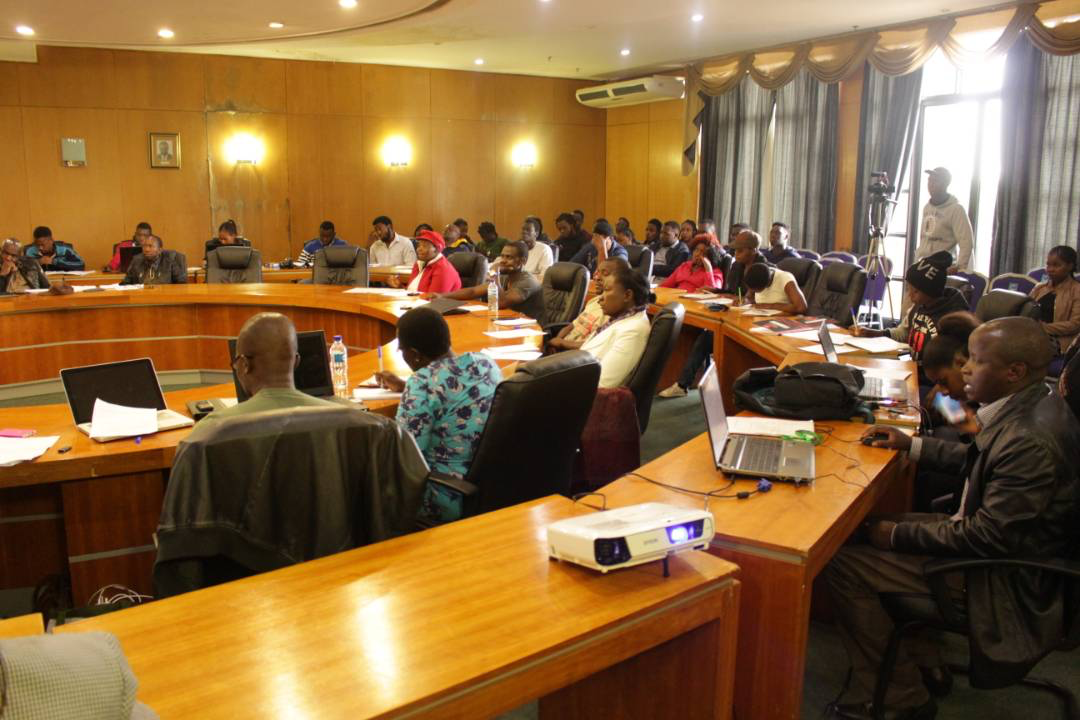 Participants at the community lecture follow proceedings at NUST

Lessons and next steps moving forward

The current challenges in almost all of the profiled slum settlements raises critical questions about the way planning has been practised in cities. That is, the tendency for formalised planning processes to focus on those parts of the city that are planned. Citywide profiling of these informal sections of the city, therefore, becomes an important tool for introducing them to the city discussions about service delivery or lack thereof. The community lecture also brought to the fore the need to seriously consider co-production as a model for not only generating mutually acceptable narratives about conditions in slums but bringing services to urban poor communities. The community lecture also reignited the conversations around setting up of a city fund as a part of a bigger strategy for resolving deep-seated financial gridlocks stalling slum upgrading initiatives. While MOUs have provided an institutional framework within which participatory slum upgrading has been undertaken, there is a need to pursue a more enduring route of developing an upgrading protocol for the city. The lecture concluded that informal planning studios would be organized as a practical platform for testing out town planning and architectural ideas to solutions identified in the citywide slum profiles.

Interested in learning more about topics like this one? Then find out more about our MSc International Development: Development Management