Daniele Malerba is a PhD researcher at the Global Development Institute

A large share of the population in Uganda is still economically vulnerable, despite a remarkable reduction in poverty in recent decades. The proportion of the population living with incomes below the widely used international poverty line of USD 1.90 a day decreased sharply from nearly 90% at the end on the 1980s to around 33% in 2012 (World Bank, 2016). Nonetheless, a large share of Ugandans still lives on low incomes, and is very vulnerable to falling into poverty. More importantly, this high vulnerability is not matched by adequate access to social security, direct income support, formal pensions or social care services.

In light of this situation, there is scope and a need to use social protection in Uganda to reduce poverty and vulnerability. 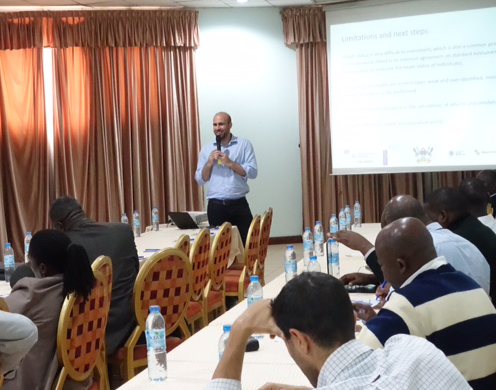 The country took an important first step with the creation of the Expanding Social Protection Program (ESP) that established a national social protection system as a core element in the national planning and budgeting process. The ESP was approved by the Cabinet in 2010 on a pilot basis and initially funded by donors (DFID, Irish Aid and UNICEF) as part of the National Development Plan. Its core objective is to reduce vulnerability and enhance productivity, with the Ministry of Gender, Labour and Social Development responsible for its implementation. The ESP’s flagship program is SAGE – Social Assistance Grants for Empowerment, which consists of two types of social transfers, both delivering a bi-monthly cash transfer of UGX 50,000. The first one is the Senior Citizen Grant (SCG), an old age social pension for people over 65 years. The second program is Vulnerable Family Grant (VFG), a cash transfer targeted to labour constrained and vulnerable households.[1]

The good news is that a recent evaluation of SAGE indicated that the program has had positive effects on household welfare. Beneficiary households reported higher consumption expenditures, particularly with respect to food, which led to a decrease of food insecurity and hunger. Households also used part of the transfers for health and education related expenditures and investments in productive assets (Merttens et al., 2016). Despite increasing political will and positive initial results that echo international evidence for the adoption of social protection programmes, funding remains low, with the current spending in Uganda at only 0.78% of GDP. This reflects different priorities and problems related to limited fiscal space.

What can be done to argue for increasing public spending on social protection? It is important not to rely solely on existing evidence that such spending will reduce vulnerability, but to also demonstrate that non-contributory social protection is more than just an expenditure; governments should also consider it a strategic investment for economic growth and/through human capital development.

Social protection, especially in the form of cash transfers, alleviates household financial constraints and thus increases investments in both human and physical capital and assets. This should in turn mean higher earnings and higher income. Therefore, social protection is more than a line of expenditure: the returns are potentially significant and should be taken into account in the evaluation of these programs, as some research has already done (Mideros et al., 2012). Moreover, these returns are a complementary, but not substitutive, function to the main role of social protection, further enhancing the programme’s ability to reduce poverty and vulnerability.

To address these issues in the context of Uganda, a team of researchers from Makerere University (Kampala), MGSoG/UNU-Merit (Maastricht University), the Global Development Institute (The University of Manchester) and the Expanding Social Protection Programme, Ministry of Gender, Labour and Social Development (Kampala) is researching the estimation of these economic (monetary) returns of social protection. This research, funded by NWO-WOTRO, will hopefully shed light on the strategic importance of social protection within the Ugandan economy, as well evaluating the returns of different social protection programmes, economic mobility and effects on the local economy. The team aims to do this by using both primary (national household surveys) and secondary data (data collected through short surveys and in depth interviews).

The research project was officially launched in October 2015 in Kampala, and will end in 2017, resulting in a report and several papers for publication and dissemination. A second visit took place during summer 2016 to present preliminary data and collect additional data. Watch this space for further updates on the project and get in touch if you have any questions.