The links between employment and development

Approximately 200 million people around the world are actively looking for work; if they formed their own country, it would be the fifth largest in the world.[i] [ii] Developing countries account for more than half of these people. The number of those who neither work nor look for work in these countries is in the hundred millions, while among those working, the majority hold occupations in farming, small household enterprises or in casual or seasonal day labour. Their labour productivity is between 10 and 40% of that in advanced economies.

Productive employment is key to growth and poverty alleviation, but there is no consensus on whether migration of labourers from the rural/agricultural sector to the urban/industrial or service sector is the answer, or if instead it is better to focus on agriculture as a growth engine. There is even less clarity on self-employment and informal employment in the urban and/or industrial sector. Are these forms of hidden unemployment or dynamic entrepreneurship? The 2013 World Development Report placed labour in the spotlight of development policy making, but there are few systematic analyses of the multifaceted nature of the link between labour and economic development, largely due to conceptual gaps and data limitations.

The Special Issue on Understanding the Links between Labour and Development in the 26th volume of the European Journal of Development Research, co-edited by Ralitza Dimova and Christophe Nordman, provides some more definite answers to key questions in the academic literature and policy debate. The Special Issue highlights new paradigms and offers new interpretations of phenomena in the interrelated areas of labour informality, self-employment, agricultural employment and its link to rural-urban migration and labour market discouragement. It uses stylized secondary data sources and unique primary surveys spanning developing countries from a number of continents in search of generalizable messages and policy recommendations.

Much of the focus of the Special Issue is on providing better understanding of self-employment and informal employment in developing countries. Contrary to views highlighting the dynamic entrepreneurship nature of these labour dimensions, the evidence presented suggests that less than 40% of the self-employed people in low-to-medium income countries can be characterised as “high potential” employers and less than half of them are even able to cross the poverty threshold of $2 a day.[iii] Indeed, as countries move up the development path, one observes a steady reduction in self-employment and increase in wage employment (Figure 1). 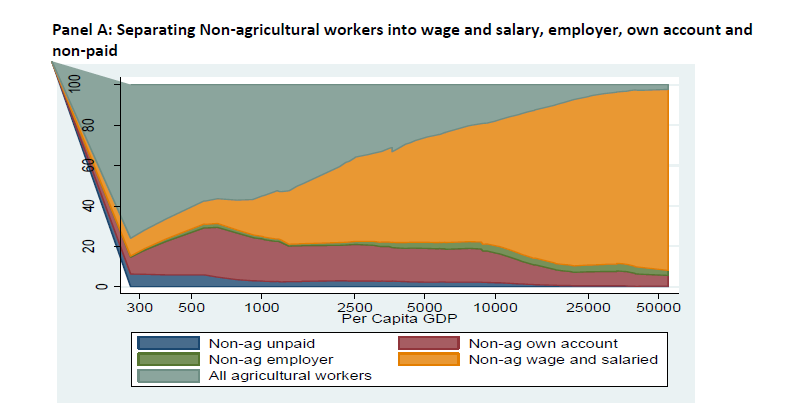 This evidence appears to be consistent with the hidden unemployment view of entrepreneurship in a dual labour market. Yet, detailed analysis of the nature and dynamics of the links of informal labour with the formal sector in the modern environment of global production networks and exchange highlights its complexity as a concept and reality, transcending the simplistic dichotomy of dual economy versus dynamic entrepreneurship.[iv] [v] In particular, the evidence presented in the Special Issue suggests that informal (typically unregistered) firms perform much better if their links to the formal sector and related institutions are stronger. Informal firms with low levels of capital are, in turn, less likely to have strong links with the formal sector. In sum, enhancing the links of (informal) firms with the formal economy is desirable, while increase in wage employment is highly correlated with higher level of economic development.

Despite this compelling evidence, small informal firms are the norm in developing countries.[vi] Moreover, employment is generated to a larger extent through the creation of new (typically informal) businesses than through a larger intake of hired labour by either newly created or existing businesses, especially during economic crises.[vii] Indeed, even in high growth periods of relatively fast growing emerging markets, the number of jobless people who are ready to work, but are not even searching for work is rather high, highlighting the presence of structural stagnation of productive employment in developing countries.[viii]

Stagnation in the urban labour market of developing countries is typically explained with institutional constraints and mismatch between the skill levels of available employees and the skills demanded by potential employers. Unfortunately, productive employment generation through agricultural growth poles does not appear to be a panacea either. For instance, the Special Issue highlights theoretical and empirical evidence that when farm incomes increase in the context of imperfect rural markets in developing countries, thus stimulating investment of credit constrained farmers in their children’s education, better educated children migrate to other sectors in search of better paid jobs instead of becoming farmers themselves.

In sum, the Special Issue argues that the mobility of labour from low productivity towards higher productivity and better remunerated jobs geographically and across sectors and enterprises is a crucial ingredient in ensuring sustainable growth and poverty alleviation. Contrary to prevailing arguments, it highlights (formal) wage employment in the context of enhanced employment and firm formalisation and firm growth as key elements in these dynamics. The policy implication is that government and international policy effort should focus on dismantling institutional and (correspondingly) skill generation constraints to this successful transition, while factoring in context specific peculiarities, social norms and household and firm level dynamics.

[iii] Margolis, Davis (2014). By choice and by necessity: entrepreneurship and self-employment in the developing world, The European Journal of Development Research, 26(4), 419-436.