Hrishipara daily financial diaries: Getting to the Gulf

For this Bangladeshi youth, finding work in Saudi Arabia meant more than getting a job offer and buying the plane ticket.

In February 2016 we were recruiting respondents for the ‘financial diary’ research project in central Bangladesh in which we record, each day, all the transactions made that day by our ‘diarists’ (as we call our volunteer respondents). You can read more about the project at its website here.

We met Humayon (not his real name) in a cheap food stall in a small market, chopping ingredients for fried snacks. He had just turned 24. He was on his own in the market, having come there from a poorer northern District in search of work. He slept on a string bed in the storage space at the back of the food stall and was paid 6,000 taka a month, working every day. That’s about $73 at the US dollar/taka exchange rate, or about $188 at the ‘Purchasing Power Parity’ rate, which adjusts for the fact that you can buy much more with a dollar in Bangladesh than you can in the US (we use the PPP rate throughout this blog). His employer allowed him to eat snacks for his meals. 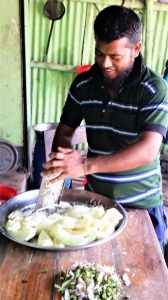 Humayon has a high school pass and can read and write Bengali and a little Arabic. He told us that his great grandparents had been respectable farmers but fortunes had declined. Neither his father nor his mother had had any schooling, and their landholding was down to just a third of an acre. Humayon has an older sister ostensibly married and living with her husband but, to the family’s great shame, the marriage was never celebrated properly, and they had been unable to pay the agreed dowry to the husband’s family. He also has a brother, then 11 years old and in primary school.

We wanted to know what he thought his prospects were in life. He smiled and shrugged. His focus was on supporting his family back home, especially getting his sister properly married and his brother through school. For himself, he had thought about getting an apprenticeship in some trade, or moving to the capital, Dhaka, for a better choice of jobs, or even going abroad, but had taken no steps and didn’t know how to go about such things. When we explained the ‘financial diary’ idea and told him we’d be interested to see what happens to him, he agreed to become a volunteer ‘diarist’.

Twenty-six months later, on 23rd April 2018 at 10am, he boarded a plane at Dhaka’s international airport, bound for a factory job in Saudi Arabia. What do our records say about how this came about?

The first thing that strikes us as we review his transaction record is how many days are ‘blank’ – days when he had no transactions of any kind. No fewer than 342 of the 786 days we followed him are blank. There are runs of blank days of up to 15 days duration. What were those days like? Well, he rolled out of bed early, washed at a pump, and cut vegetables for the morning customers. Then he lay on his bed again, then did the lunch snacks. Then he lay on his bed again, then did the evening snacks. He might chat to a few customers, some of whom he had become familiar with. Then he went to bed. On some days, knowing how unhealthy his diet was, he bought a little milk and a banana. But nothing else. Aside from water, milk was all he drank: the only time he bought a glass of tea was to entertain a guest. He never smoked, nor did he chew betel. Occasionally he chewed sugarcane. If we look at his local expenditure record for the first three months we find that he spent $110.10 (at PPP rates – $44 at market exchange rate). See Table 1.

We title this table local expenditure because we have omitted the two biggest outflows of the period. After he got paid $344 in late April 2016 (this includes back pay – he was often paid late), he smartened himself up with the clothes shown in the table, and in early May made his first visit home for some time. He spent $7.52 on bus fares, and took 10,000 taka ($313) for his father.

We didn’t know it at the time but that was an important trip home. For one thing, Humayon introduced his father to the local ‘bKash’ mobile-money agent in the village, and after that we tracked him using bKash seven times to send a total of $1,818 to his father. Neither Humayon nor his father opened an account at bKash: he sent the money ‘over the counter’, relying on the agents at each end to convert Humayon’s cash to electronic money and back again. Indeed, Humayon had no financial accounts at all when we first met him – no bank, no MFI, no co-operative, no savings club – and we didn’t track him saving or borrowing money until later. This lack of financial activity was very unusual among our 60 diarists.

On that May 2016 trip he found his father anxious and in poor health. Humayon, as an elder son, felt a strong duty to help manage the family. Conversations began about what Humayon could do to fulfil these responsibilities, and what new arrangements the family should make to facilitate them. Should they borrow? Sell more land? Should Humayon go abroad?

However, for several more months Humayon continued at the food stall and his expenditure pattern remained unchanged. Then we recorded these entries:

Our research area has a tradition of sending labour abroad and Humayon had used local knowledge to find an agent who could help him. He got his passport (not without difficulty) and then settled in for the long wait that most prospective foreign workers endure. A year went by. We thought nothing was going to come of his plans. But underground forces were building up.

The family’s village land was registered in their name but – and this is not unusual – there were others who also claimed title, and this lowered its value. Humayon had persuaded his father that they should sell some land if they found a ‘strong’ buyer – someone influential enough to see off any other claimant and able to put pressure on the land office to register the transfer securely. Suddenly they found such a buyer, negotiated, and agreed to sell 0.14 acres for the knock-down price of 400,000 taka ($12,539). October 18th 2017 began with Humayon getting this sum, in cash, from the buyer. He then went to his sister’s home, handed her husband $1,567 as dowry, and insisted that the marriage ceremony take place immediately. With his brother he went to the market and spent $281 on a wedding sari for their sister, and about the same amount on beef, along with other food. The marriage took place the next day, though on that same day, the 19th, Humayon was busy ordering and paying for building materials, because the big family plan included a rebuild of their dilapidated home. $720 went on earth to raise the house above the floodplain, $625 for timber to support $650 worth of corrugated sheets for walls and roof, and other large sums for cement pillars, doors and windows, and advances to craftsmen. The next day, the 20th, he paid $300 to the wedding ‘decorator’ (who had arranged the food and tables and the bamboo-and-cloth arch draped in coloured lights). He then gave up his job at the food stall and stayed in the village to supervise the building work.

The build up to the trip 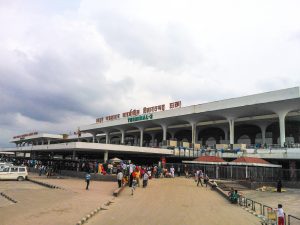 With these achievements behind him, Humayon finally felt free to focus on migrating overseas. The husband of a cousin had gone to Saudi Arabia some years earlier, and Humayon’s agent advised him that Saudi was one of the easiest places to get to: there was no need for the skills training and certification that is required for Singapore, the most popular overseas destination in our research area. The next month, November 2017, Humayon advanced the agent another $1,570 and spent $188 on medical tests and health certificates. In December he came back to our research area and took a job at another tea-stall, where he was paid a daily rate of $8. To raise more money, the family sold their cow, for $940. He was poised to leave, but on 4th January the agent suddenly told him that there would be ‘more delay’. Humayon was in despair, convinced that he’d never get overseas and worrying that his agent was crooked. They banked what remained of their cash – the first time we see Humayon using formal financial services. Humayon went back to his old routine of living on next to nothing and bKash-ing his wages to his father.

Then on 18th February his agent called to say he needed finger-prints, quickly. Humayon rushed to supply them, spending $12 on fees and bus fares. The next week he was told he had a visa for Saudi and he used a website he had been told about to check if the visa was valid: it returned a ‘yes’ answer. Things again looked promising, but in early April the agent shocked him: including the cost of the flight, Humayon still owed him $9,400 (PPP). This sent Humayon into a last frenzied but successful flurry of activity. In part by bribing bank officers, he and his father mortgaged the last of their land to a bank, getting $4,700 in record time, then topped this up with a very expensive interest-bearing loan from a neighbour of $1,567 and a ‘howlat’ (an interest-free loan) from his cousin’s family of $780. On 10th April he paid the agent in full. On 12th he made his last visit to our research area and went to the market to buy clothes for the trip as well as hair oil, soap, razor blades, toothpaste, and a ballpoint pen. On 21st, in Dhaka, he bought shoes and socks and changed $70 into Saudi Riyals. On 22nd, with everything paid, he was able to repay the howlat to his cousin. We asked him what work he would be doing in Saudi. ‘In a factory’ he said, but where and what kind of factory he couldn’t say. On 23rd he flew.