‘We Are Still Here’: Returning to Dhaka, Bangladesh 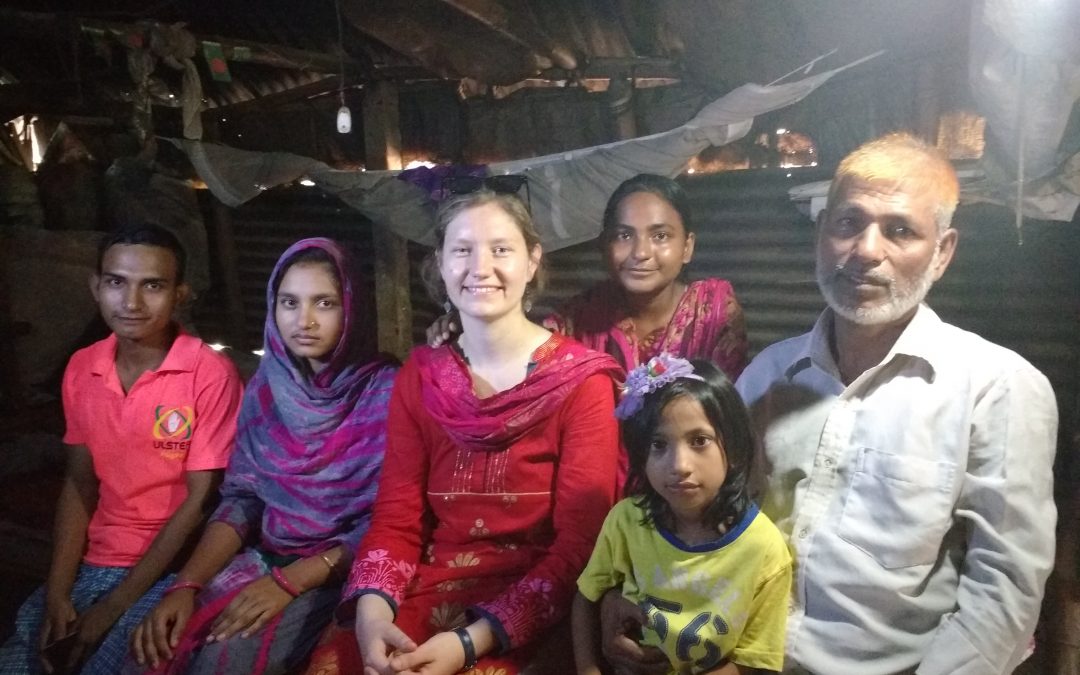 Dr Sally Cawood, a PhD Alumna of the Global Development Institute recently returned to Bangladesh to feedback her PhD findings on Community Based Organisations (CBOs), water and sanitation in Dhaka’s low-income settlements. This blog shares some reflections on reconnecting with the NGOs, urban poor groups and communities involved in the research.

On the 20 June 2018, three years after I was in Dhaka to conduct PhD fieldwork, I arrived back in Bangladesh for a much anticipated follow up trip. I planned to return much sooner but, sadly, previous attempts to do so were delayed by security concerns, finalising my PhD and starting a new job. It was the latter, however, that gave me the opportunity to go back. Shortly before completing my PhD, I joined a fantastic team of ‘WASHies’ at the University of Leeds (people who, like me, are passionate about Water, Sanitation and Health, or WASH).

I’m currently a Research Fellow working on the Bill and Melinda Gates-Funded Climate and Cost in Urban Sanitation (CACTUS) Project. My trip to Bangladesh was therefore threefold – scope for CACTUS, supervise an MSc research project, and feedback the PhD findings and revisit the communities I worked in – something I’d been waiting to do for a long time!

What would it be like to return? Would the NGO staff, leaders and residents I’d spent so long with, still be there? How could I best communicate my findings? I’d gone over these questions, as I’m sure numerous others have, many times. However, when I landed in Dhaka, everything felt very natural, as if it were meant to be. The experience of returning, and reconnecting with old friends and contacts felt very important – both on a professional and personal level. This blog outlines some of the lessons from the trip that, I hope, go beyond the technical aspects of ‘dissemination’, and highlight the importance of:

Whilst I can’t claim to have done all of the above, I hope that the following reflections are useful for those thinking about their own return visits.

Once in Dhaka, I set about reconnecting with as many people and organisations as possible that were involved in the research. The first person on my list was my trusted research assistant Rabby, who has become a good friend. The depth of findings wouldn’t have been possible without Rabby’s hard work, and it was great to be out in the field together again. I also connected with BRAC Institute of Governance and Development (BIGD) who kindly hosted me during fieldwork. I later delivered a PhD findings seminar and lecture at BIGD, and was made an Honorary Fellow, which is an Honour indeed!

In the first week, I went with Rabby on a much anticipated trip back to the three field sites I had worked in. The kindness and openness with which I was received, in all settlements, was truly humbling. Rabby and I spent a long time sitting with residents in their homes or at tea stalls, discussing the research one-to-one, or in small groups. It was great to reconnect with men and women of all ages that had spent so long discussing their lives with us and simply say ‘thank you’ and ask how they’d been.

To my relief, most of the people involved in the research were doing OK – many exclaimed “we’re still here” – but some had sadly passed away, or were suffering long-term illness. Even those in relatively stable positions still faced the daily insecurities of living in a low-income settlement in Dhaka. We visited the settlements on three separate occasions during the trip, and, whilst most visits were characterised by the joy of reconnecting with old friends, this could quickly turn to sadness, on hearing that someone had been abandoned by their husband, lived in increasing financial difficulty or feared imminent eviction. These fears were certainly not unfounded. During my fieldwork in 2015, over 40 houses were demolished in one settlement literally overnight, leaving only rubble and metal wires. 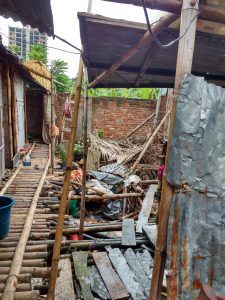 After spending nine months in these communities during PhD fieldwork, Rabby and I had made genuine connections to some residents and returning seemed to reinforce the trust built years before. This was demonstrated in one incident where a group of local leaders showed us sensitive legal documents, and asked for our impartial advice. Though we couldn’t advise (not being qualified to do so!), we referred them to organisations that could potentially help. As we were honest about our purpose as independent researchers from the outset, most people understood what we were doing, why we had returned, and that we will come again. These views were of course not shared by all, however, and some residents also regarded us with disinterest – understandable given that many people ‘come and go’, both bideshis (foreigners) and deshis (nationals), and little changes. I was therefore also aware that, in returning, certain expectations were raised, and I – or any researcher – should not take this lightly.

Building on these visits, and feedback from residents, I set about sharing my PhD findings with NGOs, donors and academics involved in the research, in person and via email. Whilst some staff had moved on, or were too busy with existing projects to read ‘yet another PhD students’ report, many were responsive, and keen to discuss the findings, especially in relation to women’s participation and CBO sustainability. The simple act of returning and re-engaging was clearly appreciated, and set the foundation for future working collaborations.

During the trip, I also re-connected with the leaders of an urban poor group who I had become close to during fieldwork. It was fantastic to meet again after so long, but bitter sweet, as the leaders expressed their frustration with the current state of funding, political interference, corruption and limited support for their grassroots programmes, including women’s skill-development, savings and advocacy on land and housing rights. Indeed, since my last visit, the political situation in Bangladesh had deteriorated, and the refugee crisis and ‘middle-income country’ status meant that previous funding channels had dried up. Despite this, networks among the urban poor groups and their members remained strong.

On one of the last days in Dhaka, the leaders took me to a community where some of their members live. Their settlement was being evicted by a local commissioner and his hired ‘musclemen’, even though they had lived there for 30 years, and had a Stay Order – ‘no eviction without rehabilitation’. The residents shared their anger and frustration that “no one is helping us, no one cares about us”, and were worried that ‘goons’ would return at any minute to threaten them and demolish more houses. This was the last field-visit in Dhaka, and one of the most poignant. As with my PhD, a clear message emerged – that any intervention to improve the lives of the urban poor in Dhaka, or elsewhere, must engage with the contentious issue of land tenure and housing security.

On the 17 July 2018, I landed back in the UK. The trip, and these experiences inevitably left me thinking ‘what next’, ‘what can be done’? For a start, more work is needed to feedback the PhD findings at the community-level, and to NGOs, donors and academics, in an accessible way (I am currently trying to write articles, blogs, short essays, and thinking about how to convey key messages via video, art or audio). I also want to connect with the organisations and individuals I wasn’t able to reach this time, and seek opportunities to collaborate with NGOs and the urban poor networks in Bangladesh (and further afield), to raise housing and tenure issues at a higher-level. I hope that I can do justice to the conversations and connections in Dhaka, and know that the return trip was just the beginning of a much longer journey.