DSA2018: Development, global inequalities, and the long histories of social injustice: meeting Brazil’s Dilma Rousseff ahead of the DSA 2018 Conference 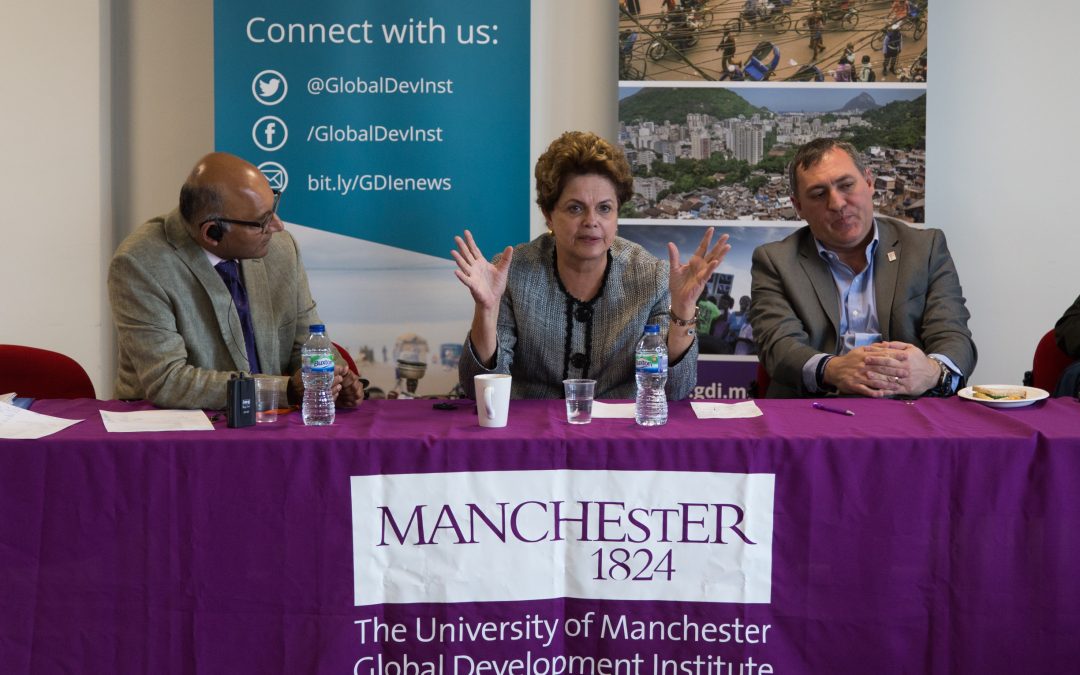 Shortly before being removed in a process widely considered to be a coup, and which was quietly but effectively supported by the United States, a left-leaning President of Brazil passionately denounced the agents of the coup thus: “The democracy they seek is the democracy of privilege, the democracy of intolerance and hatred […] It is the democracy of the national and international monopolies, a democracy that can fight against the people”.

Well done, history buffs: I am of course talking about João Goulart, in 1964. But this would also be almost indistinguishable from a description of Dilma Rousseff and the contemporary context surrounding her removal from office. The point is this: the forces that drive historical trajectories are resilient and often inscribed in a society’s underlying structure; the inequalities generated there are, as in Tilly’s landmark analysis, ‘durable’ and socially categorical, transcending the lives, choices, and acts of particular individuals.

These thoughts have been prominent over the past week for two reasons.

Firstly, the Development Studies Association’s 2018 conference opens this week (Wed 27th), on the theme of ‘global inequalities’, and I have been preparing a presentation of a forthcoming paper (“The social justice agenda in global development: which approach?”).

The DSA has chosen well: this theme reflects the zeitgeist. From the Panama Papers, Piketty, and Oxfam’s increasingly mind-boggling stats on wealth inequality, to Black Lives Matter, #MeToo, and notable referenda on reproductive and LGBT rights, inequalities of various types have shot up the agenda globally in the past few years. More generally, it would appear that even the IMF is tentatively considering a heart-wrenching break-up, currently in the crying on the sofa phase while its friends bring ice cream and insinuate they knew all along that neoliberalism was just a dashing rogue with empty promises.

The second reason is that a group of researchers at Manchester hosted ex-President Dilma for a discussion meeting last week. In the wake of her impeachment in 2016, and the imprisonment of her predecessor and Worker’s Party ally Lula, Dilma has hit the road to denounce, as a ‘coup’, the process that led to these events, and to seek international support for Lula. Manchester was her latest stop.

These two things resonate together.

Dilma spoke at some length about the current situation in Brazil, but tied it into a wide-ranging account of the country’s history. Colonialism and slavery; the associated economic structures and land ownership; the trade union movement and the struggle against the military dictatorship of the mid-20th century; geopolitics, the relevance of the United States and China; and the policies and laws brought in during the 13 years of Workers’ Party rule between 2003-2016. All of these things, according to Dilma, weave together to explain why she is no longer in charge, why Lula is in prison, and why Brazil is currently ruled by a president (Michel Temer) with an approval rating of 3%, whose government has moved swiftly to scale back social policies and to weaken labour unions.

If this sounds complicated – it is. What Dilma didn’t say, of course, is that some part of the explanation for her downfall has to include her own limitations as a political strategist and personality. There is also (as she did recognise) the significant economic trouble her administration ran into as global commodities prices dropped (in these aspects, too, she shares a lot with Goulart). However, those things are not impeachable crimes, sufficient to overturn over fifty million votes and install a government with a markedly different programme to the one the electorate voted for. Dilma is, in my view, correct on the broader points.

People will have varying opinions on these controversial matters. Mine is that, in the context of a political scene where almost nobody keeps their hands clean for long, the period of Workers’ Party government was on balance a Good Thing, and what has now taken place is a Bad Thing: essentially a ‘soft’ coup d’etat, driven by a political-media-judiciary nexus of conservative elites dismayed at Brazil’s turn to redistribution and the erosion of old privilege.

This highlights many salient points about inequality and social injustice. As I argue in the conference paper, while inequality, and even the previously-too-lefty-sounding idea of ‘social justice’, seem to be making their way into mainstream development discourse, if social justice is to avoid the habitual fate of once-critical ideas co-opted into warm and fuzzy development ‘buzzwords’, it needs to be theorised and approached in particular ways.

To start with, what is known by political philosophers as a ‘non-ideal’ approach, which starts from the diagnosis of actually-existing injustices rather than theorising ideal institutions, is clearly preferable within most of the contexts that development thinkers and practitioners deal with.

In particular, a more insightful conception (in my opinion), sees injustice as a ‘relational’ phenomenon, in a double sense. Firstly, social injustice is predominantly located in the durable relations between particular groups or categories of person; secondly, analysing injustice involves emphasising the relation between the privileged and the impoverished, the powerful and the marginalised, the prestigious and the disparaged – not just the attributes, possessions, and end-state outcomes of the disadvantaged taken in isolation. Oftentimes such relations are co-produced and reproduced in a symbiotic manner.

A further consideration is that, especially within the field of global development, social injustice today is a transnational phenomenon, where political and economic decisions have constituencies that no longer fit into national borders. This is, of course, not a new point, but theorists of social justice – and this certainly goes for myself – still need to understand better how we can think about justice within this transnational frame.

Finally, part of my work with the Effective States and Inclusive Development research centre at Manchester has involved re-considering the excellent body of evidence amassed by ESID researchers on the politics of development, and particularly on the way that prevailing power relations between contending social groups shape what is possible for states, policymakers, donors, and activists within developing country contexts. This has revealed a number of exciting insights: for instance, the value of supporting sub-national coalitions and ‘pockets of effectiveness’ in contexts where the national regime is unwilling or unable to pursue inclusive development strategies, and the way that movements or trade unions can ally with state actors to force progressive change. However, it has also, in my view, highlighted a major quandary regarding when it is preferable to ‘work with the grain’ of questionably democratic and occasionally unsavoury political settlements in a pragmatic attempt to secure development goals, and when it is, instead, preferable to stand in solidarity with movements attempting to renegotiate the terms and underlying power balance of such settlements.

All of these thoughts became salient listening to Dilma discuss the situation in Brazil.

To briefly recap, Dilma, in her youth an activist and political prisoner under the dictatorship, was president for the final five of thirteen years of Worker’s Party rule between 2003 and 2016, and a key figure in the party and movement since the 1980s. She was impeached and removed from office in 2016 for accounting irregularities in reporting the state’s budget, which came within a general ‘anti-corruption’ movement driven by an enterprising judiciary.

As I discussed in a blog at the time, this is not a simple story. The Workers’ Party revealed itself to be implicated in corruption, but Dilma herself was not accused of anything particularly serious or personally-enriching, and the Chamber of Deputies that voted to impeach was, farcically, stacked to the rafters with far more deeply corrupt politicians and parties. Moreover, the Workers’ Party oversaw a period of significant pro-poor growth in Brazil, with major reductions in poverty and inequality, and the upscaling of a raft of public services.

This has now been replaced by a conservative and fiscally neoliberal regime, with a cabinet comprised almost entirely of wealthy white men, and which (long story short) represents a return to influence for the landowning and business elites who have traditionally dominated Brazilian politics. Emboldened, the far right is on the rise, as evidenced by the current lead enjoyed by (the frankly horrific) Jair Bolsonaro in the polls for the presidential election later this year. The hero of the Workers’ Party story, Dilma’s predecessor Lula, who would otherwise be leading the polls, has been imprisoned on similarly flaky grounds to Dilma.

One of the most interesting moments of our discussion came when a colleague asked, of the years immediately preceding Dilma’s impeachment and removal in 2016: wasn’t it evident from a long way off that this was going to happen? “Yes”, was the ex-President’s basic answer. She meant this in two senses.

Firstly, from the moment of her re-election in 2014, Dilma said, it was clear what was going to happen, but there was nothing within democratic means that could be done. (This was a fascinating admission to hear.)

Secondly, in the deeper historical sense that I am drawing attention to here, there was a feeling of inevitability about this turn of events.

Since the return to democracy in the late 1980s, and particularly since the election of Lula, Brazil has seen wealth and power begin, slowly, to be redistributed; the poor and the black and brown population entering middle class jobs, education, and status; and the first female president. But from even before the very founding of Brazil as a nation, its agricultural and economic elites have enjoyed incredible wealth and land-ownership in contrast to an impoverished mass, and concomitant domination of politics. They were never going to lie down that easily. Moreover, as in 1964 – which led to two decades of military dictatorship – and as all over Latin America, this latest regime change clearly bears the hand of the United States, and the interests of its investors.

How can countries resist these forces? How can inequalities that are so historically durable be overcome? How can this be achieved within the straightened circumstances of most developing countries?

Over to you, DSA.