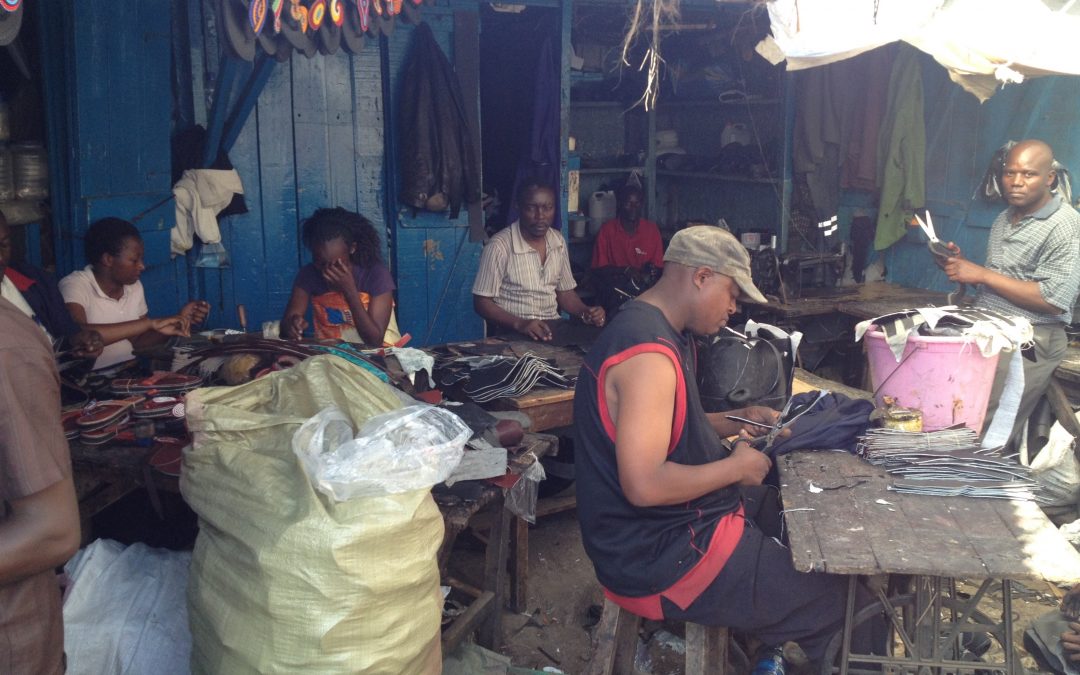 The recent growth of South-South trade and talks about the ‘great convergence’ between developing economies in the global South and developed ones has sparked increasing attention among development studies scholars. The GDI has been at the forefront of ground-breaking research evaluating the economic and social impact of this phenomenon. In particular, the work of Khalid Nadvi, Stephanie Barrientos, and Rory Horner has significantly contributed to understanding the different value chain configurations of global value chains across Northern and Southern end-markets, as well as their consequences for firms and workers.

A newly published Open Access article in the Journal of Economic Geography by myself and Matthew Alford further contributes to this literature, providing new insights on how lead firms across developed and developing countries govern their interactions with suppliers in the global South. To do so, we developed a sequential mixed-methods approach combining transaction-level customs data and interviews with leather manufacturers in Kenya. Importantly, Kenya’s leather industry provides an ideal scenario of an emerging sector governed by lead firms across one Northern (Europe) and three Southern end-markets (China, India, and the Common Market for Eastern and Southern Africa (COMESA) region).

New findings from Kenya leather: the role of product standards

Drawing on econometric analysis of customs data, we ask whether European buyers entertain more stable and direct interactions with Kenyan suppliers compared to their Southern competitors. Traditional research would suggest that, due to relatively higher product and process standards, lead firms in the global North are more likely than their Southern counterparts to consolidate linkages with suppliers, hence resulting in more knowledge transfer and higher learning potential for the latter. In line with this hypothesis, the article finds that European buyers establish significantly more stable and direct interactions with Kenyan suppliers compared to Chinese lead firms. Nevertheless, this variation is less significant for India and COMESA. First, Indian buyers develop equally direct, yet more unstable interactions than European buyers. Second, the COMESA regional market reveals direct and stable interactions comparable with Europe. The results for India and COMESA are particularly unexpected vis-à-vis GVC studies linking less demanding product standards (typical of these end-markets) with less integrated market-based coordination mechanisms.

Evidence from supplier interviews helps shed light on these surprising results, highlighting how buyers’ considerations of product standards are critically informed by the ‘process of trust-building between network agents’. In doing so, we bridge GVC research on trust in inter-firm linkages with Martin Hess’ seminal work on embeddedness in global production networks. According to the first, trust can evolve from ‘contractual-’ to ‘competence-’ and ‘goodwill trust’, as lead firms increasingly rely on suppliers to perform certain tasks without taking unfair advantage. Certainly, trust can be ‘process-based’ emerging from cooperative interaction between buyers and suppliers. However, and most importantly, trust can also emanate from actors’ societal and territorial ‘embeddedness’ in shared cultures, social norms, and institutions.

While in Europe-Kenya networks, ‘process-based’ trust develops over time as a consequence of direct and stable interactions to monitor complex product and process standards, the opposite does not hold true in South-South value chains linking Kenyan suppliers with Indian and COMESA buyers. Notably, our interviews show how actors’ societal and territorial embeddedness can significantly alter lead firms’ and suppliers’ decision over how they govern their respective value chains. This is particularly reflected in regional value chains within COMESA, where societal and territorial embeddedness have favoured the emergence of direct and stable networks characterised by competence and goodwill trust, despite comparatively low product specifications. In India-led value chains, buyers’ and suppliers’ societal embeddedness in a shared cultural and linguistic background has also favoured contractual trust and direct interactions, yet the lack of territorial embeddedness within a common institutional framework has constrained competence trust. 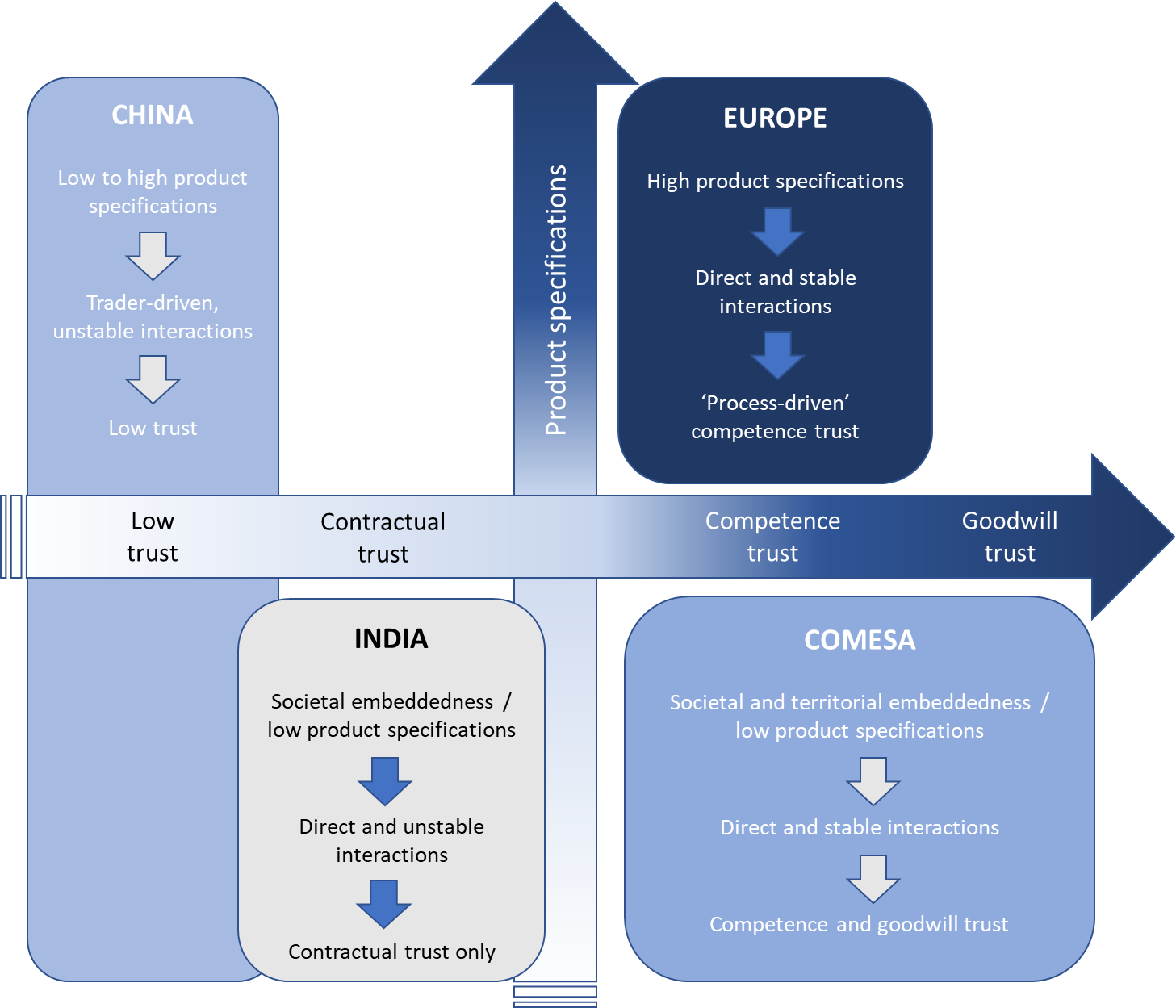 Building on these points, our research draws critical attention to the heterogeneity of value chains across the global North and South, as well as within the South. We observe substantive differences in private governance across the global South in China-, India-, and COMESA-led value chains, underpinned by variations in product quality and trust-based linkages, which are further driven by aspects of territorial and societal embeddedness. We, therefore, dispute previous GVC studies that claim product standards are uniquely determinative of private governance, in ways that vary across Northern and Southern end-markets. Conversely, we call for greater emphasis on the combined role of product specifications and trust in GVC studies, to help facilitate a more conceptually robust understanding of how value chains are governed across diverse geographical contexts. Such an agenda, we argue, is all the more important against a backdrop where multiple value chains co-exist to serve different Southern and Northern end-markets.