How does India engage with sustainability standards? 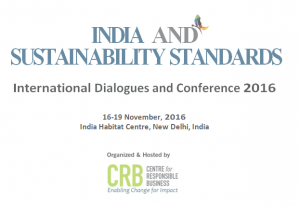 By Natalie Langford, PhD research at the Global Development Institute

In November, the Rising Powers and Global Labour Standards team will be travelling to India in order to jointly host a conference alongside Centre for Responsible Business (CRB), a prominent NGO based in New Delhi. ‘India and Sustainability Standards: International Dialogues & Conference’ (ISS 2016)  takes place from the 16-19th November. It presents an exciting opportunity for us to disseminate our research and engage to a broad audience of stakeholders involved in the sustainability field in Asia.

The broader theme of the ISS conference is the UN Sustainable Development Goals (SDGs) and how the corporate sector can contribute towards achieving  these ambitious goals. There is a broad consensus that governments alone will not be able to meet these goals. However, our research demonstrates there are key roles that government departments and agencies need to play to ensure that businesses can operate efficiently while contributing towards sustainable development.

Our project, led by Professor Khalid Nadvi at the Global Development Institute has been concerned with how global labour standards affect production processes, and the ways in which various actors have engaged with the shaping of such standards.  Our research has important implications for how effective labour standards can foster responsible business practices. 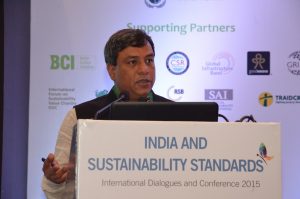 Whilst privately governed ethical standards (such as Rainforest Alliance or Forestry Stewardship Council) have become a key feature of global value chains in which goods and services are sold in Northern markets, there is a growing interest in the ways in which standards may emerge in global value chains across the Global South. Given the huge growth in production and consumption in , Southern markets, it is especially important to understand the extent to which actors in the Global South are also shaping labour standards for local markets.

India is one of the three Rising Powers (alongside Brazil and China) in which the project has conducted extensive qualitative and quantitative research, in order to examine this phenomenon. Given that states, firms and civil society organisations are all recognised actors engaged in standard setting, the core research questions of the project focused upon the ways in which these different sets of actors had been exposed to global labour standards, their perspectives and experiences, and the ways in which they seek to shape (or not) labour standards for markets in the Global South.

As a PhD student on this project, I have been lucky enough to gain a great deal of insight into the ways in which Brazil, China and India have engaged with the standards agenda through my interactions with the senior academics attached to the project. Professor Nadvi has assembled a truly global team of academic experts; from local colleagues at Alliance Manchester Business School through to Professors based in India, China and Brazil who have all contributed their knowledge and experience to the project. 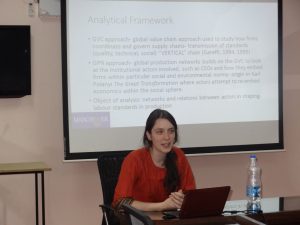 My own research has focused on India in particular, and the conference is an opportunity for me to present my findings on Trustea, a new standard for the Indian tea industry which is specifically focused on the domestic market. I explore the role of both global and national actors within the development of the standard, and how the interactions between state, civil society and lead firms within Trustea has contributed to new forms of governance of social conditions within the Indian tea industry.

We’ll also be presenting our research related to Indian lead firms, civil society organisations and the state in relation to global sustainability standards. Professor Rudolf Sinkovics from Alliance Manchester Business School as well as Professor Peter Knorringa from the Institute for Social Studies (ISS), based in The Hague, Netherlands will all be discussing their latest findings as contributors to the Rising Powers project. The conference has been organised by Dr Bimal Arora, Chairperson for Centre for Responsible Business.

The conference will take place from 16-19th November at the India Habitat Centre (IHC), New Delhi.  Register for a place. We will be tweeting live from the conference using @powers_rising