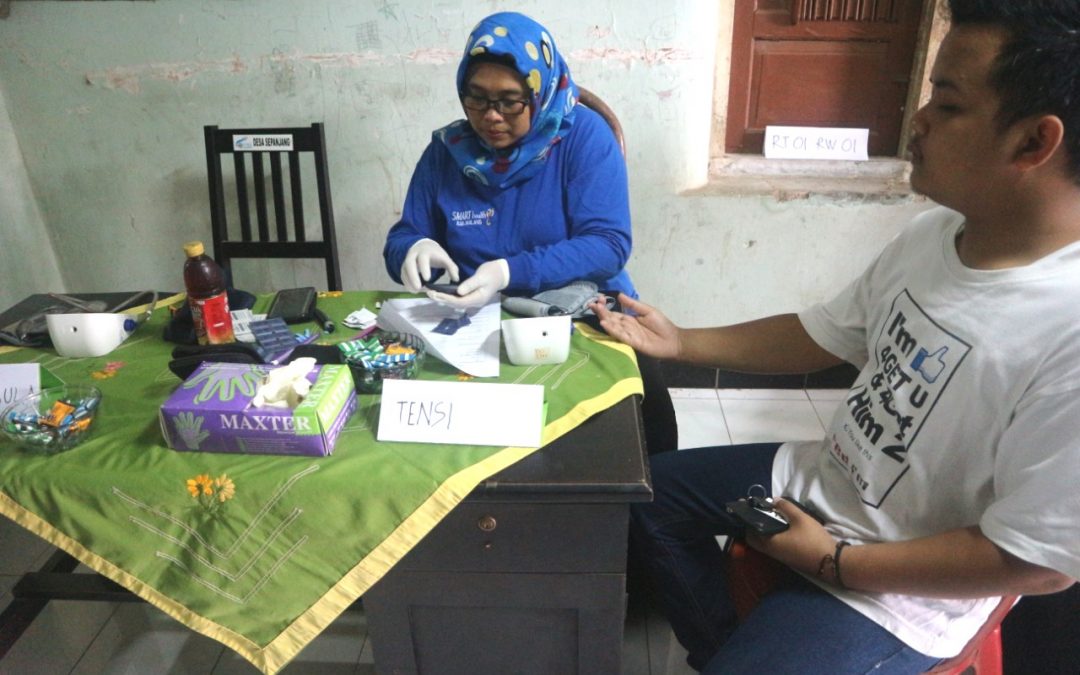 Indonesia is the fourth most populous country with more than 210 million people, undergoing wrenching demographic and epidemiologic transitions. The country is young, though its adult population is already under a grave threat from non-communicable diseases such as heart failure and stroke. One in three deaths, common and costly among prime age adults, is caused by cardiovascular diseases. This death toll is in line with global figures.

In a series of research programmes using blood biomarkers we measured the magnitude of the threat, put in place a complex intervention with social, technical and medical components, and evaluated its efficacy. We are continuing to drive the intervention more broadly, in partnership with the district of Malang in East Java, the University of Brawijaya and the George Institute for Global Health (Sydney) to bring health to people in rural Indonesia.

In the first study we found a considerable need for cardiovascular care: two-thirds of adults ≥40 year were at medium-to-high risk of cardiovascular death. But they were unaware of it. It taught us the critical role of signals from blood biomarkers, such as chronic inflammation markers or blood glucose markers.

This study also identified that it was critical to tap the signals from blood biomarkers outside of the clinics and in the community, where those at risk are going about their daily lives oblivious to the threat. After all, cardiovascular disease is largely asymptomatic. We aimed to capture these signals in situ with the help of community health volunteers.

For the second study, we put in place a solution of complex interventions built on the potential of mobile technology in the hands of these volunteers. The interventions were holistic and include

These components constitute a multi-faceted and integrated health system intervention: from the community health volunteers’ hands through public doctors in clinics (Puskesmas) by referrals for appropriate medications, finally with follow up for medication compliance firmly in the palms of the community volunteers, thus completing the integrated cycle.

It taught us the crucial lesson that community volunteers (kader with at most high school education) are ready to partner in tackling cardiovascular disease threat, with SMARThealth app in hand.

With the SMARThealth programme being adopted by the district health authority, the evidence found in the second study on the at risk prevalence (double what the authority had thought) helps feed into health budget and policy on non-communicable disease in the district.

In the third paper in the series we reported the causal effect of the complex intervention, trialled in four intervention villages and four control villages, screening and following 6,579 high risk adults for more than a year.

The intervention led to greater use of preventive medication and lower levels of blood pressure. More than 15% of those in the intervention villages reported use of appropriate preventive medicines (including simvastatin, amlodipine, captopril) compared with 1% in the control villages. This is great news for the rural population as they now have a complex community tested intervention to manage their cardiovascular risk, including reducing their blood pressure levels.

Such success is of course not guaranteed, as less successful mobile health interventions have shown.

On the strength of the effects we found, a programme to cover all villages in Malang has been launched on 5 August 2019 to spread the benefits to all exposed to the risk of cardiovascular disease. The programme evaluation is funded by the Australian National Health and Medical Research Council, under the Global Alliance for Chronic Diseases: Scaling-up of evidence-based interventions led by Prof. Anushka Patel from the George Institute for Global Health in partnership with the Malang district government, Brawijaya, Manchester and the community.

For bringing the programme to all villages, a local newspaper reported, the government is committed to set aside up to 1 trillion rupiah for basic services including health services.  The leadership by the district government with support from international and local partners, can ensure the sustainability of the necessarily complex intervention to tackle the threat of non-communicable diseases.

The complex intervention, based  on SMARThealth mobile app, has secured an award for our local partner, the government of Malang district as the most innovative district in Indonesia for empowering people through mobile apps. The Indonesian government through the ministry of health conferred this award in a ceremony on 12 November 2019. Watch the video of the conferment.