Against the odds? Democracy counters dominance in Zambia’s 2021 election 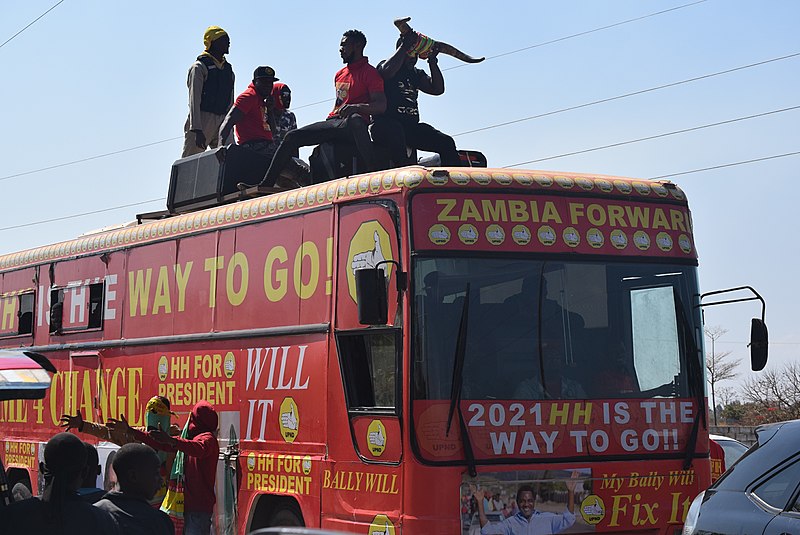 On 12 August 2021, Zambians went to the polls for the country’s eighth presidential election (and sixth general election). From a wide field of 16 candidates, the leading contenders were the Patriotic Front (PF) party’s President Edgar Lungu and Hakainde Hichilema, from United Party for National Development (UPND). Following an extremely tight race between these two rivals in the previous election in 2016, which Lungu narrowly won with 50.35% of the vote, tensions were high. In the early stages of August’s election count, the incumbent President was trailing behind opposition leader Hichilema and claiming that the elections were “not free and fair”. Initially, Lungu looked set to reject the results citing incidents of violence and allegations of fraud. However, after a weekend of tension and behind-the-scenes negotiations, Lungu conceded defeat on 17 August.

Hichilema’s victory marks the nation’s third transfer of power since the re-introduction of multi-party elections in 1991. However, the continued centralisation of executive powers in the Presidency has at times threatened democratic consolidation, by providing opportunities for reducing oversight and accountability. Under President Lungu, the Patriotic Front (PF) government increasingly adopted authoritarian tendencies. Democratic spaces closed, with independent media outlets shut down and opposition figures harassed, and there was a general breakdown in the rule of law. The PF controlled institutions such as the police and the courts and used them to undermine democracy and limit the ability of opposition parties to mobilise freely. The levels of corruption soared, with ruling party officials and close associates of the president engaging in corrupt activities with impunity.

In the five years from 2016 to 2021, there was also a major increase in political violence between supporters of the PF and the UPND, mostly instigated by the former ruling party. The PF’s foot soldiers (commonly known as ‘party cadres’) were notorious for publicly displaying large amounts of cash on social media, despite many lacking legitimate sources of income. The most significant attempt to undermine Zambia’s democracy under Lungu was the proposed Constitution Amendment Bill No. 10 of 2019, which would have removed parliamentary oversight over the executive and created a constitutional dictatorship, had it succeeded.

Although Zambia’s slide to authoritarianism became evident in the last five years, the slide can be traced to two main events. The first was the election of the PF in 2011, when the party’s founding president, Michael Sata, assumed power and the second is the transition of power from Sata to Lungu, following the former’s death in October 2014. Sata was in poor health for much of his presidency, a situation that created uncertainty about his political future. Rival factions emerged within PF to position themselves for possible succession. The succession wrangles were characterized by violent clashes between cadres of the rival factions. When Sata died, a faction that included his funders, backed Lungu for the PF presidency. This faction also had the support of party cadres who ensured that Lungu was elected unopposed at the PF’s convention in November 2014 by intimidating his opponents who stayed away from the convention for security reasons. In power, Lungu was beholden to the interests of both his funders and cadres, who effectively captured his presidency.

The threat to democracy also had implications for civil society which became heavily divided along partisan lines, with many Civil Society Organisation (CSO) leaders co-opted by PF. Their fragmentation undermined cooperation on salient issues like corruption and electoral processes, where previously they had aligned to counter threats such as former President Chiluba’s third term bid in 2001. More recently established CSOs like Alliance for Community Action (ACA) and Chapter One Foundation maintained the high ground. Linkages between progressive CSOs, intellectuals, lawyers and artists, and the innovative use of social media amidst media repression and COVID-19 restrictions, meant that civic awareness messages still managed to reach a broad audience. The Christian Churches Monitoring Group (CCMG), under the strong leadership of Rev. Emmanuel Chikoya, was a crucial partner of the election observer effort. Ahead of the elections, there was a successful attempt by the Commonwealth to bring together civil society groups around the Coalition for Peaceful Elections in Zambia, highlighting the important contribution of coalitions to the promotion of inclusive development in the face of barriers to progress.

While Lungu’s bid for dominance was clear from the outset of his tenure, the election outcome demonstrates that there can be limits to incumbent advantages and authoritarian strategies in the face of weakening institutions, a failing economy and poor service delivery. Since the PF came to power in 2011, the professionalism and performance of the Ministry of Finance have declined. Last year, the autonomy of the Central Bank also came under threat with the appointment of a politically inclined and motivated governor. During this time, Zambia’s debt stock has increased from $1.9 billion in 2011 to $12 billion in 2021, and the country defaulted on its Eurobond debt during COVID-19. Unemployment rates and the cost of living have skyrocketed, with 40% of Zambians unable to afford more than one meal a day. Debt service accounts for 38.5% of the 2021 budget while the social sector budget stands at 25.1% of the total, reduced from 29.4% in 2019. The health sector budget also declined, which is particularly worrying in the context of the COVID-19 pandemic.

During the election campaign, Lungu’s presidential running mate suggested that “people need extra glasses to see what PF has done over the last 10 years”. However, Zambians were actually examining PF’s track record closely and many found it wanting. Ahead of the elections, Lungu deployed the military onto the streets, and on polling day the Zambia Information and Communications Technology Authority (ZICTA) blocked social media platforms, including Twitter, Facebook and Whatsapp. There were also discrepancies in the initial results, notably Feira Constituency, where the announcement from the Electoral Commission of Zambia was challenged by the UPND chairman for elections. Nonetheless, the combination of a politically neutral military, effective election observation, determination among citizens to safeguard the vote, and an appetite for change overcame Lungu’s attempts at intimidation and dominance. The landslide nature of Hichilema’s victory – with a winning margin of over a million votes – facilitated the smooth transition, as a close result (as in 2016) may have provided greater opportunities for PF to challenge the results.

The events of the past decade have demonstrated both the fragility of Zambia’s democracy and its resilience. While countervailing powers have successfully challenged constitutional threats, such as Bill 10, the dangers of Zambia’s highly centralised political system persist. Hichilema now faces the mammoth task of tackling Zambia’s economic challenges and restoring the rule of law. Expectations are high and Zambia’s citizens are watching closely, putting UPND under pressure to deliver on their pre-election promises. Whether the new ruling party will succeed and what this power shift means for the country’s political settlement remain to be seen.

Image: UPND Supporters after the 2021 elections in Zambia. Image source