Climate action: why developed countries should track imported emissions, and how to make certification and labelling work for developing countries 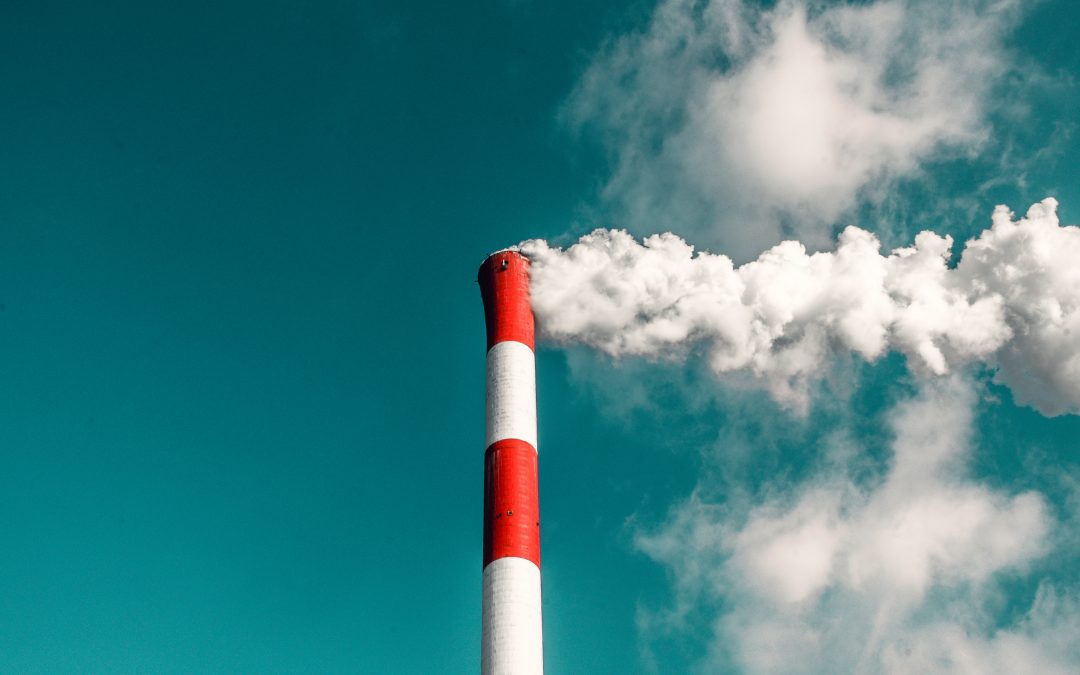 Developed countries are making progress in reducing carbon emissions – and Government regulation of the private sector is playing its part. In the UK, for example, and alongside other measures, the requirement to report energy and carbon emissions has recently been extended to a wide range of quoted and unquoted companies and limited liability partnerships. This is intended to help improve energy efficiency, support companies in cutting costs, and at the same time reduce carbon emissions. Many hundreds of companies have signed up to measurement and certification, and sometimes offset, schemes, like the footprint label from the Carbon Trust, the carbon neutral label from Natural Capital Partners, or Carbon Smart certification from Carbon Smart. The scope and coverage of such schemes is expanding, as indirect emissions and life cycle issues are recognised.

There is, however, a large gap in current policy: it does not take account of the emissions embodied in imports, and thus of total consumption emissions. These have been growing in size and relative importance in most developed economies. In the UK, once again, the latest figures show that between 1997 and 2016, territorial emissions fell by over a quarter but imported emissions rose by 20%, with the net result that the UK’s total carbon footprint fell by only 9%. Imported emissions now account for 45% of the UK’s footprint (Figure 1). Policy-makers are paying attention. For example, the Science and Technology Committee of the UK House of Commons recently concluded that ‘the Government should do more to increase the prominence of consumption emissions’. The incoming President of the European Commission, Ursula von der Leyen, has also highlighted the issue. 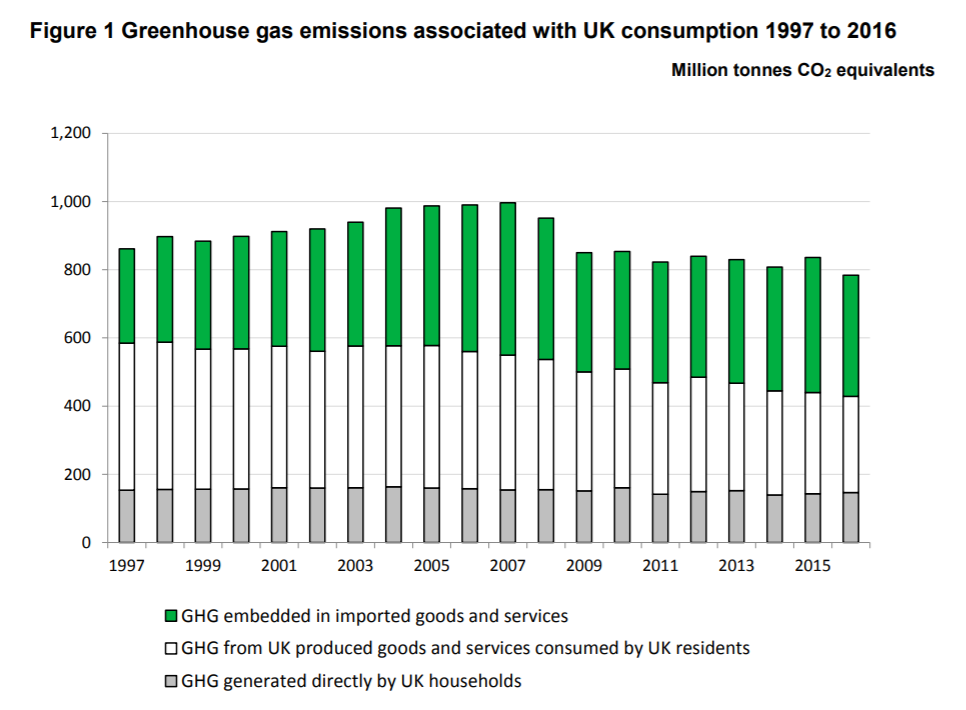 Rising consumption is the main cause of rising greenhouse gas imports

It is important to emphasise that the main driver of rising imported emissions is increased consumption, itself driven by rising population and income. Deindustrialisation and the shift of industrial production to developing countries may also play a part in some cases. That suggests a priority is to manage consumption and consumer behaviour, a big topic in itself, and one with important implications for developing countries. For example, if the Oxfam campaign to buy only second-hand clothes in September were to succeed in curbing long-term demand, that would impact on jobs in exporting countries like Bangladesh or Vietnam. Similarly, if long term demand for imports of extractives from Africa to the EU were reduced, African countries could stand to lose over 20% of their total export value.

And energy efficiency needs to improve

Independently of action on developed country consumption behaviour, however, action is also needed to reduce the carbon intensity of imports – as also of domestic production in both developed and developing countries. Energy efficiency is a key element. The carbon intensity of production has been falling fast in countries like India and China, but is still significantly higher than in OECD countries: not surprising when coal still plays such a large part in many emerging economies.

Certification and labelling can play a part

An important question remains. Should reporting, certification and even labelling be extended to imports? And if that were to happen, what would be the impact on developing countries?

Certification and labelling might well be thought to be plausible and popular drivers of carbon reduction in developing countries. In addition to the internal benefits, companies can benefit from external validation and reputation enhancement. Consumers can also benefit if carbon certification and labelling help them make better choices. Fair Trade certification is an example of a scheme which delivers benefits to both consumers and producers – via guaranteed prices, premium payments which can be used to improve productivity, and support to producer organisation.

There are pitfalls in implementing certification.  Experience across many sectors shows that certification can be costly and time-consuming, especially for poor producers and countries. Further, these groups can find themselves as having standards or reporting requirements imposed, with little scope for participation or ‘voice’, and often with different priorities to those they themselves would choose. There is a risk of a top-down ‘green squeeze’ on the suppliers in low and middle income countries. From a consumer perspective, an additional risk is ‘label overload’, with labels for different aspects crowded onto packaging. And from a trade perspective, certification can cause trade distortions and over-burden trade agreements. It may also, in some cases, be incompatible with WTO rules.

If the pitfalls are to be avoided, reporting, certification and labelling of developing country production need to be planned in such a way as to maximise the participation of those involved upstream and downstream in the value chain, and harmonised so as to reduce costs and a multiplicity of reporting and labelling requirements. Certification at the company level will be more straightforward than trying to tie emissions to particular and highly heterogeneous products. It will also be important to tailor certification to the specific circumstances of different sectors. In the UK, for example, the construction industry is an important source of emissions, but one less suited to consumer-facing certification than some other sectors.

And reaping the benefits

There will be benefits. The UK, along with some other developed countries, has committed to net zero carbon emissions by 2050. Many developing countries will need to follow suit if global warming is to be kept to the level agreed in Paris in 2015, well under 2 degrees, and if possible 1.5 degrees. At present, the world is very far from being on track to meet those targets. Indeed, the national plans submitted in Paris promised only about a third of the reduction needed to reach 2 degrees, and only about 10% of the reduction needed to reach 1.5 degrees. The plans themselves are not always being implemented: half of G20 countries have more work to do if they are to come close to meeting their 2015 pledges. New pledges are required by the UNFCCC in 2020, for the period to 2030. Certification could play a part in helping all countries identify carbon hot spots and take decisive action to reduce emissions.

Certification is not the only option. Technology transfer offers important possibilities, including within companies as a result of foreign direct investment. Overseas aid can also be a useful incentive. In these cases also, however, there are benefits in measuring and reporting on carbon emissions. The Greenhouse Gas Protocol, developed by the World Resources Institute and the World Council for Sustainable Business Development, is used by companies and certification bodies, and by Governments, including the UK. It provides a global framework, alongside ISO and other standards.

If no action is taken, and as the carbon constraint begins to bite, there will be pressure to enforce carbon intensity standards, for example by imposing new tariffs, so-called border carbon adjustments. Indeed Ursula Von der Leyen has proposed BCAs, as has Elisabeth Warren in the US. These will be problematic, adding to trade tensions at a time of increasing protectionism. Better by far for developing countries and their development partners to launch the progressive, step-by-step adoption of new standards and certificates.

Photo by veeterzy on Unsplash