It is with great sadness that we report the death on October 21, 2019 of Emeritus Professor Dennis Austin at his home in Colchester. Born at the Grove Hospital, Tooting on 14th  March, 1922, he was the son of Henry Edmund Austin. After wartime service with the Royal Air Force, he obtained his B.A. degree from King’s College (University of London) in 1949, and that same year was appointed an extra mural tutor at the new University College in the British Gold Coast dependency in West Africa. 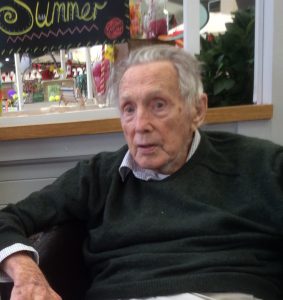 Professor Austin was to remain there for what was to prove a highly eventful decade, as the rapid growth of African nationalism saw the Gold Coast achieve its independence as the new state of Ghana in 1957.  This period was also to see the launch of what was to become an impressive scholarly career. With his colleague William Tordoff, he produced among the first studies of electoral politics in West Africa, and he then went on to chart the evolution of nationalist politics in Ghana into the first years of independence with his landmark Politics in Ghana: 1946-1960. He was to write or edit 12 further books during an extended career that were to establish his international reputation as an astute and measured observer of postcolonial politics in Africa and indeed elsewhere (including India and Sri Lanka as well as South Africa, Malta, and the Commonwealth).

In 1959 Professor Austin received a three-year Rockefeller research fellowship, and following this a joint post at the Institute of Commonwealth Studies and the Royal Institute of International Affairs; the University of London subsequently awarded him a readership. In 1967 Dennis Austin joined the Department of Government at the University of Manchester as a professor. He served there and then at the closely linked Institute for Development Policy and Management (now the Global Development Institute) for over thirty years, becoming Pro Vice Chancellor of the University while also having a term as Dean of the then Faculty of Economic and Social Studies.

He was a stimulating and authoritative teacher, highly popular among his undergraduate students and the diploma and MA candidates at IDPM – not least with his considerable fund of entertaining stories from a long career. For his fellow members of staff (and especially those at earlier career stages), Dennis could be a wise, older brother, explaining the way in which universities could be unwise and sometimes unfair…but also excellent places to work!

Many of the doctoral students who developed under his supervision have gone on to distinguished careers at British, African and West Indian universities.

Dennis Austin’s wife Margaret passed away in 2010, while a son died in Ghana when young. He is survived by his son Stephen and three daughters, Catherine, Elizabeth and Florence, five grand children, and four great grandchildren.