The power of the sewing machine: A masterclass in building alliances for workers’ rights and sustainability in global production networks

By Aarti Krishnan and Corinna Braun-Munzinger, PhD researchers at the Global Development Institute 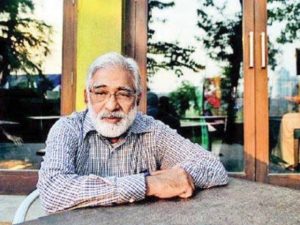 “In life there are a few things worth doing, saving lives is one of them”

Karamat Ali‘s moving words were imprinted in the minds of everyone seated in the room. Based on 40 years of experience as a labour and development activist in Pakistan, Karamat Ali gave his audience in Manchester a masterclass in building alliances for workers’ rights and sustainability in global production networks. The talk focused on Pakistan Institute of Labour Education & Research (PILER) campaign work for compensation for 254 workers families who died and 55 who were injured in the aftermath of one of Pakistan’s most devastating factory fires, at Ali Enterprises in Karachi in September 2012.

Ali enterprises supplied jeans to German clothing retailer KIK. At the outset, it seemed hard to imagine that it would be realistic to achieve compensation for workers and their families. Would it be possible to hold those responsible locally to account? And was there any way of reaching KIK’s headquarters far away in Germany? Karamat Ali took us all through this emotive and arduous journey of how after four years of struggle, workers’ voices resonated across the country and beyond.

At the start, PILER began to mobilize locally. This was not easy, because unionisation in the apparel industry was low and thus strikes were not an option to make workers’ demands heard. To get around this problem, PILER decided to look for an alternative way to create public awareness about the loss of lives and injuries of workers sustained in the fire. PILER along with family members of the victims teamed up with a famous Pakistani singer (Jawad Ahmad) to create an evocative YouTube video that asked workers to unite.

The video was aired by local TV stations and garnered widespread local attention in support for workers’ demands. Parallel to the public campaign, PILER relentlessly pushed for judicial action in Pakistan by calling for a detailed inquiry in court into the causes of the deaths of the workers and to press criminal charges on those responsible for the incident.

PILER also built international alliances to initiate a dialogue with KIK and stakeholders in Germany (where the jeans produced by Ali Enterprises were sold). To start reaching out beyond Pakistan, PILER drew on earlier contacts from the European Clean Clothes Campaign. Building on this cooperation, a range of additional NGOs and trade unions in Germany became active on the issue. Initial success was achieved in December 2012, when KIK signed an agreement with PILER to pay an initial US$1 million into a relief fund for victims and agreed to providing long-term compensation. However, reaching agreement on how this compensation should look like took further scaling up of the initiative, not only involving global unions like IndustriALL, but also the German government (which had just launched a new initiative on sustainable textiles) and the ILO. Thus successful partnerships with the German government, global partners, and effective local mobilisation (including national legal procedures), resulted in the disbursement of not only US$ 1 million but a new negotiated amount of US $5 million by KIK in 2016. Against all odds, PILER provided a platform for workers’ voices, in Pakistan, creating ripple effects from Berlin, to the ILO, to the headquarters of KIK, which 4 years ago seemed unreachable.

Karamat Ali’s talk speaks of hope, of victory in the face of adversity and to never give up fighting for what is right. Heroes really do exist and we were lucky enough to meet one. He showed us that there is a need to build ‘real alliances’ , – alliances in which those who buy the clothes take responsibility for how they are produced and for those who sit at the sewing machines. This stands testament that improving working conditions of workers leads to sustainable, resilient and conflict-free production networks… something every major retailer needs to hear!