How do Rural Labour Markets Respond to Shocks?

The occupational portfolio choice of small farmers in rural environments is among the most high profile areas of research and policy debate in development economics. One key focus area is the choice between relatively risk-free – though less profitable – activities such as subsistence farming and higher-risk and higher return activities like livestock and cash crop production. The consensus is that relatively asset-poor and risk-averse households are likely to opt for subsistence farming and out of higher value cash crop alternatives, thus potentially going down the slope of further destitution. By contrast, off-farm (especially non-agricultural) labour market opportunities tend to be seen as an escape route for farmers out of poverty, especially in the event of shocks. However, most of the related literature highlights lack of availability of such opportunities for households that have failed to reach a certain wealth and education threshold.  In both cases, the policy advice is in favour of asset reallocation from relatively wealthier to relatively asset poor households.

The paper on Off-farm labour supply and correlated shocks: New theoretical insights and evidence from Malawi, published by Ralitza Dimova and co-authors in the January 2015 issue of Economic Development and Cultural Change challenges this policy consensus. The paper explores intriguing cases of labour market dynamics in the face of correlated shocks – namely shocks experienced by the majority of households in a village – and examines cases of deepening poverty even when there are no obvious barriers to entry in the off-farm labour market.

The starting point of the analysis is the phenomenon of off-farm ganyu labour in Malawi, namely low skill and poorly remunerated labour that farmers supply off their own farms. Approximately half of the rural people in the country supply ganyu labour and there are virtually no other (better remunerated) off-farm job opportunities in the rural areas. To learn more about the ganyu market, we build a theoretical model that explores labour allocation of farmers between low risk and low return food crops (such as maize), higher risk and high return cash crops like tobacco and groundnuts and off-farm ganyu labour. The main focus is on identifying the determinants of these livelihood choices and exploring the general equilibrium (demand and supply) conditions of the ganyu labour market in the event of correlated shocks, namely shocks in the form of drought, flood or pest that affect all villagers simultaneously.

Figure 1a: Land distribution in Malawi

Source: Authors’ calculations, based on the Second Integrated Household Survey on Malawi

Larger land endowments are a key determinant of entry into the higher risk, but significantly more profitable cash crop market, especially that for tobacco and groundnuts. For instance, the statistics in Figure 1b indicate that while almost none of the farmers in the lowest quintile of the land distribution is involved in tobacco production, approximately 30% of the farmers in the highest quintile produce tobacco. Similarly, approximately half of the largest farmers produce groundnuts, while only 20% of the smallest farmers are involved in the production of this cash crop.

Figure 1b: Crop choice of farmers by quintiles in the land distribution 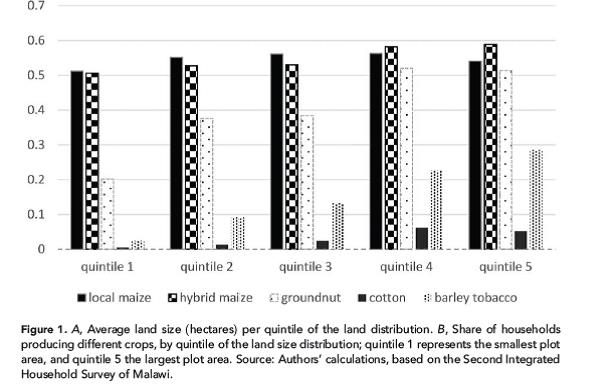 The most interesting finding from our rigorous theoretical and econometric analysis is that while during shock- free periods, smaller and asset poor farmers are by default reliant on the (low return) off-farm ganyu market and larger farmers are large buyers of ganyu labour, the situation changes dramatically in the event of a shock. Large farmers, who have opted for the more profitable and higher risk cash crops (the production of which is more likely to be affected by a negative shock) are disproportionately affected by the natural disaster. They have no other choice but to leave their own farm production, reduce the intake of ganyu labour and enter the low skill and low return ganyu labour market themselves. This leads to a reduction of ganyu wages, which – in turn – reduces the number of hours supplied by smaller farmers.

Our theoretical results, backed by evidence from Malawi, provide at least some ground for re-thinking policy advice. On the one hand, we observe that larger land endowments do not ensure better off households against risk in uncertainty ridden environments. On the other hand, we find evidence that challenges the consensus of much of the focus of the off-farm labour literature that dismantling entry barriers to the off-farm market may be a panacea to poverty and income inequality. This may indeed be a viable prescription in contexts where good non-farm jobs exist and there are high (wealth related) access barriers to these jobs. However, we find that even when there are no barriers to entry, the off-farm labour market may still struggle to provide successful consumption smoothing and poverty alleviating occupational alternatives to poor farmers. In such conditions, direct interventions as in the case of public works programs could be a preferable policy agenda.