Reflections on an embedded approach to research with impact 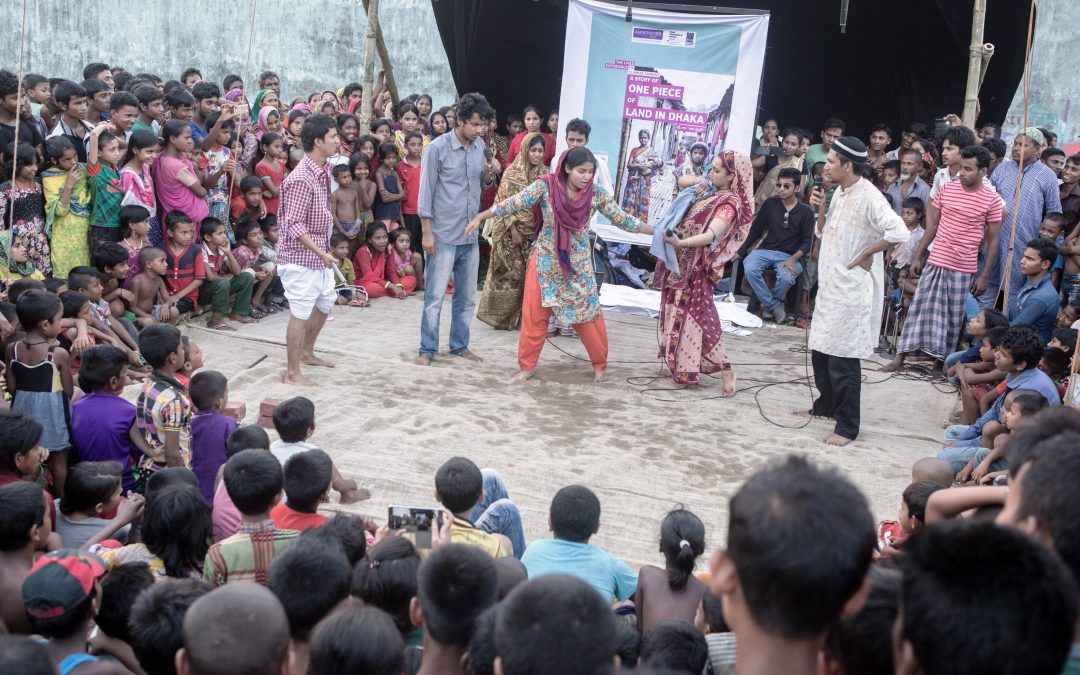 Academics in the UK are now working in a context in which doing research that has societal ‘impact’ is an increasingly important requirement for funders, institutions and scientific bodies. But, before the ‘impact agenda’ emerged, like many climate change and development focused academics, my main motivation for becoming a researcher was a passion to contribute towards social change.

So, how can we create engagement and impact with our research? Drawing on my experiences of developing ‘The Lived Experience of Climate Change’ project based on my research looking at urban climate resilience and how land tenure affects adaptation to climate change in Dhaka, Bangladesh, I highlight some key lessons for effective public and stakeholder engagement and impact.

You can read the recently published engagement and impact report for the project here.

The reflections presented here, are provisional, with monitoring and evaluation of the project ongoing, and are by no means a checklist for engagement and impact.

The project initially engaged residents of Duaripara informal settlement in the research findings and built awareness and action on their ‘everyday’ realities of living with climate change, through an interactive theatre performance.  Subsequent theatre performances, documentary films, educational programmes, and public events were then used to engage a much wider set of international and national audiences. 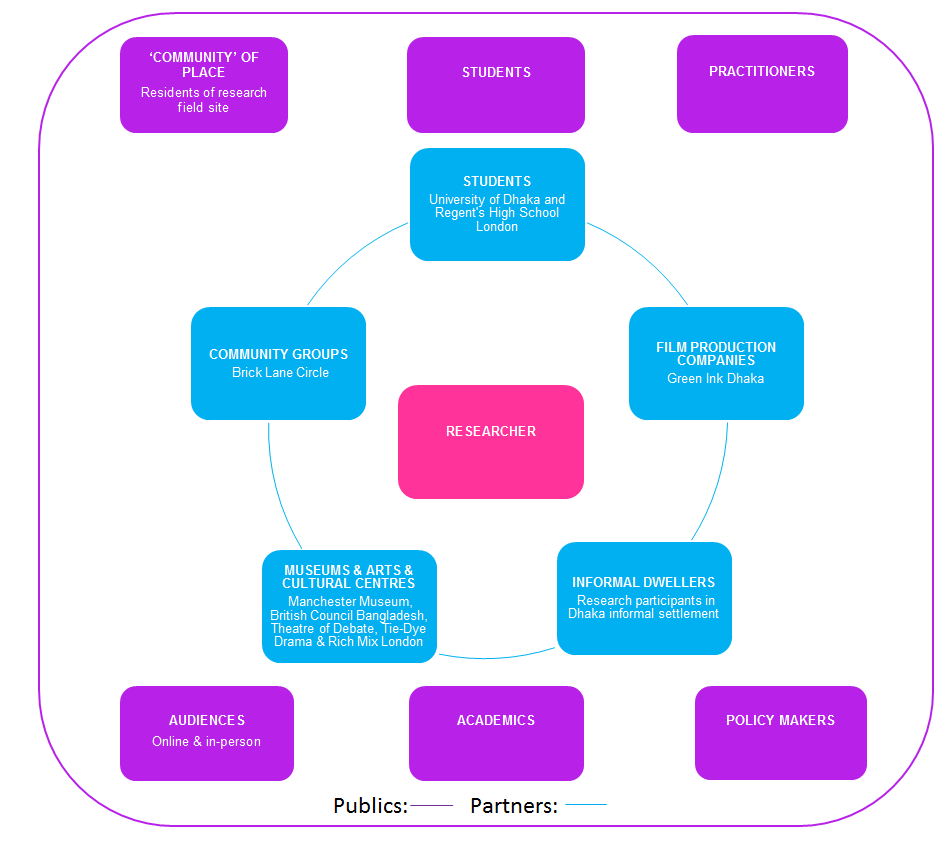 The use of inclusive, accessible, entertaining, and diverse engagement activities helped make the needs and priorities of low-income people much clearer, and it meant that I was able to reach over 235,000 people nationally and internationally with varying levels of: knowledge on climate change, education, literacy, and language skills.

The surveys found that key publics were interested in and enjoyed engaging with climate change through performance theatre (95%), documentary film (90%), and public events (Rich Mix, 93% and Manchester Museum, 87.5%), and the majority felt that engaged discussion and participatory interaction encouraged sharing of ideas and enhanced learning on the day-to-day experiences of those impacted by climate change (live theatre performances, 88%, Rich Mix, 83%, and Manchester Museum, 75%).

The project adopted an ‘embedded’ and people-centred approach to research that involved working closely with residents of Duaripara informal settlement, to coproduce the research findings. In addition to the initial interviews and data collection, research participants and the wider community were engaged around the results of the research, through performance theatre and documentary film, providing them with a chance to give additional feedback on its key themes. To do that, taking the time to build relationships based on trust with the very people that this research focused on, really mattered. Central to this was ensuring that every participant had an opportunity to contribute and all inputs were valued. This can have unexpected, but important consequences, with some people that participated in the research telling me that they are not often asked their opinion, or it is not valued (particularly women), and that talking about their problems and someone listening helped them.

The emphasis on understanding the diverse, multi-faceted, and complex ways that low-income people experience climate change helped to ensure that different publics were better informed of the needs and priorities of low-income people; this is critical for allowing interventions to be better adapted to local socio-cultural contexts.

Figure 2. Do you think the focus on the ‘everyday’ experiences of those impacted by climate change is an effective way of communicating the issue? 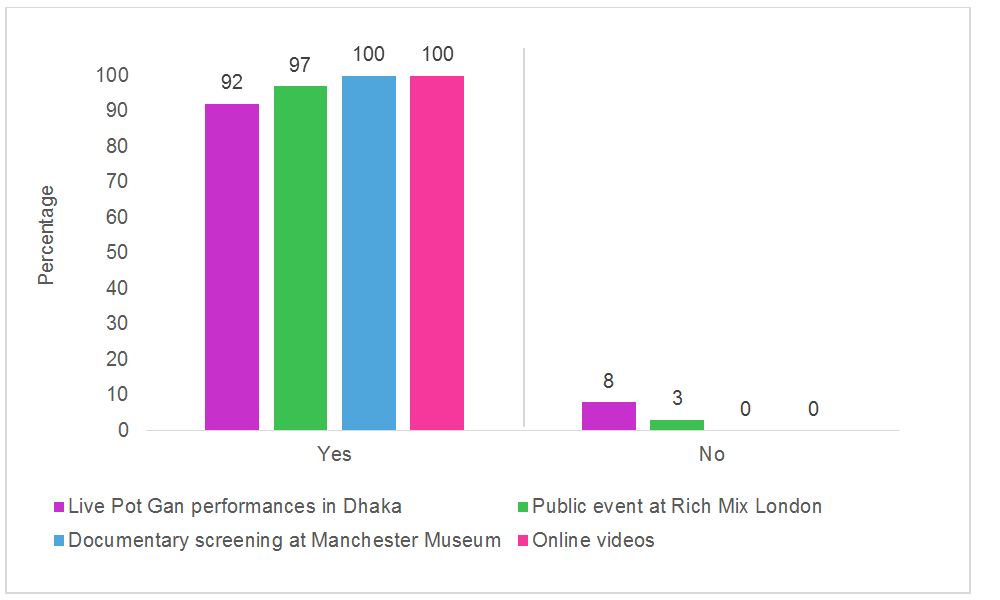 The focus on telling stories about real people with real lives and real loss helped to emotionally engage with diverse audiences. Indeed, 64% of the audience that attended the Rich Mix London public event said that they care more about climate change as a result of attending the event.

A broad range of activities enhanced learning, understanding, and awareness:

The broad range of project activities deepened engagement and understanding of the ‘everyday’ realities of climate change with an extremely diverse range of publics based in the UK and internationally. 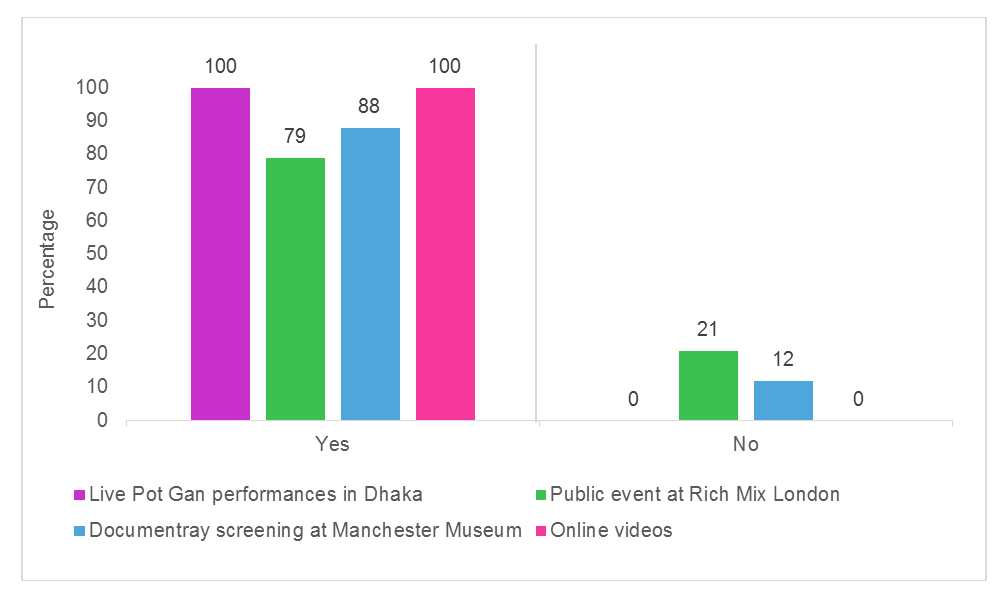 The surveys found a minimum of 69%, had learned something new or that it changed the way that they think about climate change (see Figure 4). Perhaps surprisingly, the project even influenced audiences with existing climate change and development expertise. 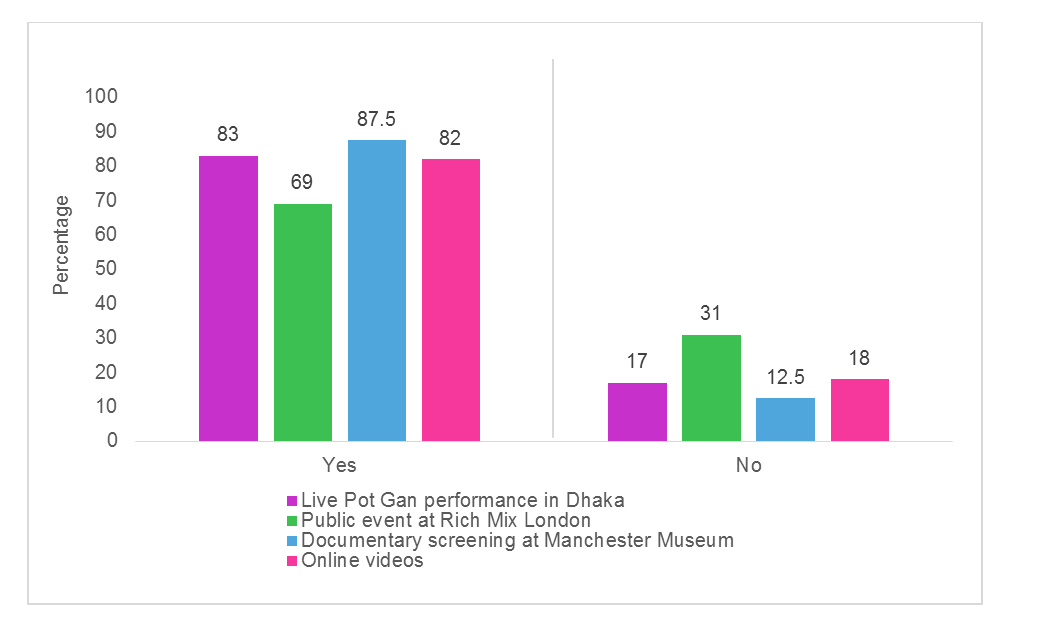 Facilitated young people’s engagement with climate change in Bangladesh, the UK, and Ireland:

For many academics the biggest impact that we can have on society is through our teaching. The project centered on the involvement of students as part of a broader teaching and learning strategy. I worked with the University of Dhaka to develop a theatre performance based on my research as part of their MA programme. The project helped Bangladeshi students at the University of Dhaka learn about the impacts of climate change. In the longer term, involvement with the project will also enhance the students’ employability in a variety of ways. The students gained valuable experience of working on a real academic research project with involvement in all stages of theatre performance, production, and documentray film.

Emerging from the research insights, new, teaching resources have recently been developed to support secondary school teachers in the UK and Ireland help young people develop the knowledge and skills to think critically about climate change in an urbanising world, and to achieve impacts on learning outcomes, attitudinal shifts, and behaviour change, through engaging with the experiences of those ‘Living on the Frontlines of Climate Change’. Project materials have been used as teaching resources at the University of Manchester with, almost 250 MSc students engaging with the research material through digital media. This aimed to help students to develop their understanding of the diverse, multi-faceted, and complex ways that low-income people experience climate change.  We also worked with Year 13 BTEC Performing Arts students from Regent’s High School in London to re-enact key scenes from the theatre performance in public events in the UK.

The project developed a diversity of engagement activities to ensure that the research findings were not just made available within the UK, but also internationally, particularly Bangladesh. The project highlights the potential of developing engagement activities that transcend cultural and geographical boundaries. For example, performance theatre proved to be an inclusive medium that reaches audiences across language barriers. 76% of those surveyed were not fluent in Bengali, however, only 5% of respondents indicated language as a significant barrier to their understanding of the theatre performance, despite it being performed in Bengali. Making available project outputs and resources in the language of the country that the research is carried out in is of critical importance, given that the documentary with Bengali subtitles was the most-viewed of my project video outputs and allowed me to reach an audience double to that I would have had if I only published with English subtitles.

Used a fully planned communication and marketing strategy to make an impact:

The project used digital and social media, local communication tools, and traditional broadcast media to communicate with a diverse range of key publics. Social media has been critical to driving the project’s potential research reach and impact, including sharing videos, teaching resources, blog posts, and newspaper and magazine articles, and other project materials to a variety of audiences across Facebook, Twitter, and YouTube

While project videos have attracted an audience of up to fifty times higher than predicted, the findings draw attention to a broader challenge of using videos on social media to drive research reach and impact. While the average watch time figures were better than I anticipated, social media audiences have notoriously short attention spans. This highlights the importance of the project’s use of multiple channels of communication, such as the public events in the UK, where viewing figures are comparatively lower than on social media but the overall impact and watch time is far higher.

Facebook has been critical for reaching a Bangladesh audience, however it is also clear that females in Bangladesh have proved to be very hard to reach in the social media space. Again, this underlines the importance of employing several channels of communication, with the audience picture being quite different for the live theatre performances in Dhaka, with much larger proportions of the audience being made-up of females.

Worked together to create and apply knowledge collaboratively:

Having worked in Bangladesh on various projects since 2007 this enabled me to access a range of networks to develop the project.  Establishing partnerships – mostly beyond academia – with a range of organisations (see Figure 1) in Bangladesh and the UK was key to developing the engagement activities, as each partner brought different skill sets and areas of expertise from which the other partners were able to learn. A diversity of partnerships was central to interacting more effectively with a diverse range of  publics, including producers and users of knowledge beyond academia.

For further information on the project